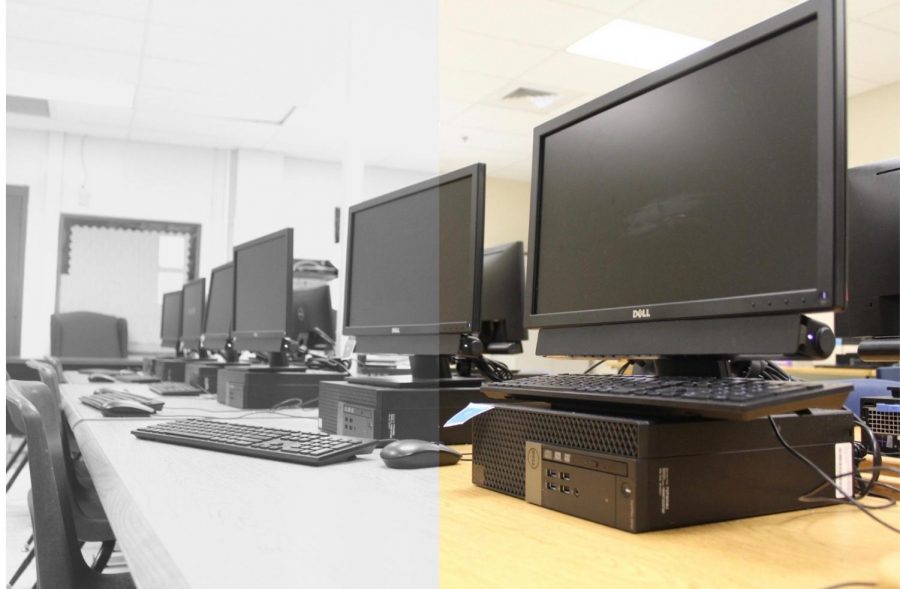 Throughout the years, technology played an increasingly significant role in the lives of students at home. However, as the prevalence of technology increases, schools start to breed computer-dependent students adding to the expenses students must consider even as early as their high school years.

A staple in the lives of American teens, technology plays a major role at home and at school. However, this ever-present necessity did not make itself evident until the widespread appearance of computers and the Internet in homes, which began in the late 20th century.

“75% of U.S households had no Internet in 1996,” graphics editor for the Washington Post Reuben Fischer-Baum said.

Technology use in society soon bled into school districts, creating computer labs and areas for students to explore beyond the bounds of their curiosity with the help of the Internet.

Nonetheless, NC’s high school students initially showed disappointment when they learned that Georgia Tech and other colleges required incoming students to use their own personal computers.

The underlying problem for students with computer usage in college became the Internet’s less-than-ubiquitous existence and ridiculously-expensive cost for students facing the already daunting tuition cost.

“The students are overwhelmed because they not only have to pay college tuition, housing, and food but now computer expenses. If Georgia Tech is going to make it a requirement, then they should include the price in the tuition. This way, there is less controversy,” (1996) staff member Elisha Reasor said.

While past students disagreed about the need for computers, their concerns would not stir up much conflict in the present-day. As more people purchase computers, bringing the devices to school and using them in homes became normalized.

With the establishment of the World Wide Web, communication increased between people across the United States.

“Congress decided that the Web could be used for commercial purposes. As a result, companies of all kinds hurried to set up websites of their own, and e-commerce entrepreneurs began to use the Internet to sell goods directly to customers. More recently, social networking sites…have become a popular way for people of all ages to stay connected,” History.com editors said.

As wireless Internet increases and personal computers become simpler to transport, laptops start to play a significant role in the educational wellbeing of students.

Online classes call for students to rely on school computers or to bring their own. Other classes, such as newspaper, may even resort to requesting that students bring their own devices to accommodate for the growing class-size and limited supplies. The schools’ addition of wireless connection and other adapting features enables this dependence on technology from students.

“Google is helping to drive a philosophical change in public education—prioritizing training children in skills like teamwork and problem-solving while de-emphasizing the teaching of traditional academic knowledge, like math formulas,” technology reporter for the New York Times Natasha Singer said.

Former students of NC living in the peak of America Online (AOL) would have never predicted the widespread reliance and necessity of computers in college, nevertheless in their very own high school.