300 wins and counting for Gorsuch 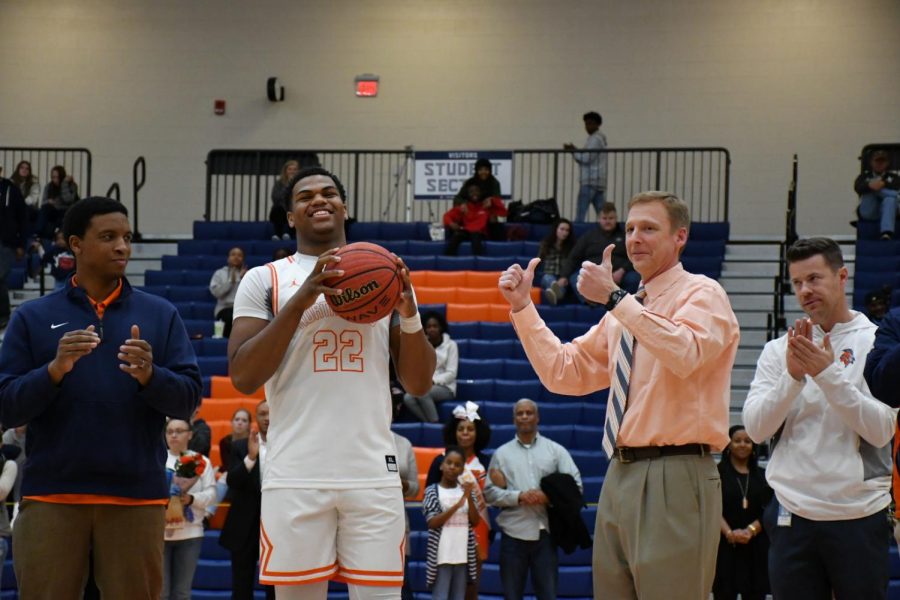 Varsity Boys Basketball coach Terry Gorsuch accompanies senior player Kevin Hester during senior night, saying a farewell to a significant part of his 2018-2019 season coaching basketball. “Each Senior group is special—these four seniors have been awesome and I will truly miss them. Shota Suzuki, Kevin Hester, Josh Moten, and Tyrese Crawford have done so much for the program the last four years,” Gorsuch said.

“My dad pushes me to be better no matter the circumstance—not just as an athlete, but to help out people in general. He just tries to bring out the best in me. It’s been my dream to play at NC with my dad as my coach, and I’m just trying to make the best of the time I have,” son and varsity sophomore athlete Tyler Gorsuch said.

Before arriving at NC, Gorsuch coached for three years as an assistant coach at Oglethorpe University and two at Sprayberry High School. During the 1999-2000 school year, he began his career at NC.

Gorsuch played basketball himself and began his athletic career at a young age; he maintained the sport throughout high school and further on in his college career. In high school, he played at Walton where he ranked within the top ten players in Cobb County his senior year in scoring, rebounding, and assists. While attending Emory University, he starred in an All-Conference selection and held a number of school records when he graduated in 1991. Among other accomplishments, Gorsuch currently holds a record at Emory in ninth place at three assists a game and third place at 1,296 field goal attempts. Today, Gorsuch remains part of the Emory Sports Hall of Fame.

From the beginning, Gorsuch lead NC’s Varsity Basketball team to victory with aspiring plans to make NC Basketball one of the best teams in the county. During his 2012 and 2013 season, the team won 26 region games and made the elite eight and final four during playoffs. Record-wise, these teams hold the top spot for basketball teams at NC. However, he considers his first team in 2000 as the one which established the program’s culture. Additionally, in 2007, his team made the sweet 16, and despite losing to the eventual runner-up, the accomplishment maximized their potential.

This 2018-2019 basketball season shows unique highlights of his basketball coaching career. This season’s win against North Paulding marked his 300th win during his time at NC. Making every game count, the team grew and bonded, setting high goals to achieve together.

“A highlight of the season has got to be seeing the youngest team in [the] region (NC) tie for third in regular season play and watching the players be a team on and off the court,” Gorsuch said.

From the time spent with the basketball program at NC, Gorsuch devoted himself to the players and teams at the school and lead NC to victory.

“A great achievement is watching the players enter the program as boys and leave as young men, seeing players who have graduated and return to visit talking about their experiences as an NC basketball player is amazing. I am most proud when I see the former players being productive citizens and fathers,” Gorsuch said.