NC ROTC preps for (and shows out at) regional drill meet 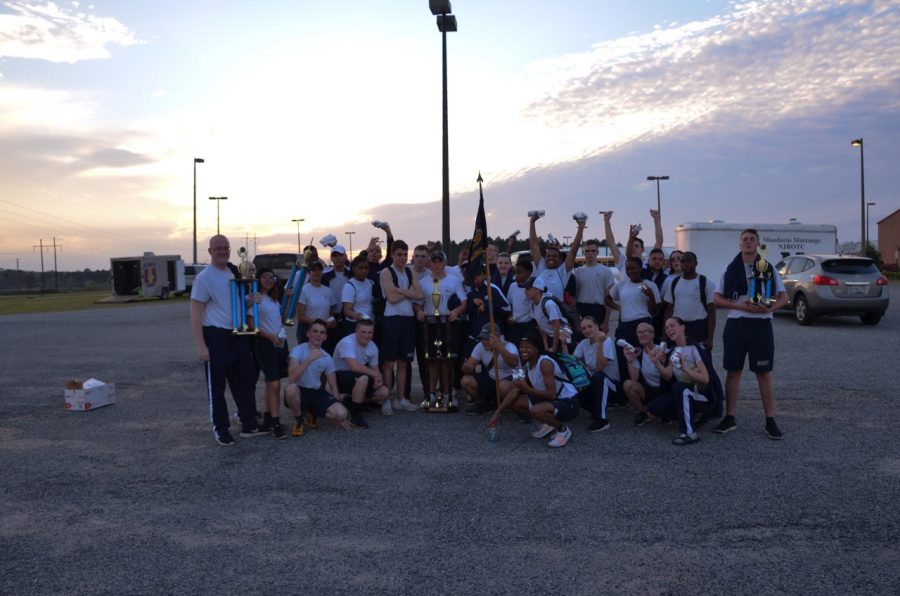 The NC-Harrison JROTC team basks in the glory of their achievements at the Area 12 Championship event. Held once every year at the start of March, this event evaluates all the ROTC groups in the Cobb region and beyond for various military skills, including general and advanced knowledge on military history, as well as the intricacies of military marches.

NC, like most high schools, contains a great variety of extracurriculars in which students can take part. Band, Rescue Warriors, Family Career, and Community Leaders of America (FCCLA): all of these clubs and more not only provide a way for students to flex their creative muscles but also inculcate essential lessons for each distinctive subject. Despite the benefits of the three aforementioned clubs, none of them represents these strengths as thoroughly as the NC-Harrison Reserve Officer Training Corps (ROTC).

Though most NC students may see them as only the “army kids” (or any similar generalization), the reality lies far deeper. Partaking in such common ROTC activities as the annual military ball, rifle matches, courses on military history, and Brain Brawls, the NC-ROTC division offers a wide array of undertakings for members but perhaps none bigger than the drill meets. During these events, the Drill Team (composed of Armed Basic and Exhibition teams) performs movement routines and basic rifle marching for a group of judges. Obviously, these meets mean much to the unit, causing untold amounts of stress among the ranks. It seems, however, that the local group need not worry long, as their season ends in early March with the Area 12 Championship.

“Our upcoming drill meet … is being held in Coffee County, Georgia; it’s basically like middle Georgia, so we’re basically in the middle of nowhere. It’s held at Coffee County High School, [and] it’s going to be scored on a uniform inspection, which gives the most points. Then it has the academic test, which gives the second highest [amount of] points, and then you have your athletic and drill events, which there are four of each item excluding competition color guard,” NC-ROTC Drill Team Commander Jacob Chmelecki said.

The Area 12 Championship likely means a great deal to the ROTC members attending, beyond the sentiment of reveling in the event and represents the culmination of all the training and practice of the preceding year. The scores earned prove their worth to professionals with military experience. For ROTC members, the meaning of this event arises from a prior incident, one that marked a major turning point for the team.

“It’s special to me because I hope we do good at Area 12, our state championship. Because last year at our Area 12, [that] was our first time qualifying for nationals, because we did so good. [And] I want to maintain a streak for the unit right now, so I don’t want to have to be the one guy who just doesn’t go [to Area 12] right after we were so good, I want to maintain it; plus I’m a senior, so it’ll be my last time going,” Commander Chmelecki said.

The pressure of performing complex tasks under these strenuous circumstances provides enough stress to wear anyone down, but when one adds in the competition from all the schools in Cobb County, the NC unit must deal with a rather full plate. Despite such daunting expectations, the NC-Harrison team believe themselves on target to succeed.

“I do think we have what it takes to ace it that’s not the cockiness coming out of me. I know that we’re a really good unit, but I’m very confident in our ability—we have improved so much from last year. We’ve done so many changes that have…only affected us in a positive light. You can look back on our old meets this year, where we’ve taken place first place overall. I’m pretty sure we’ll do outstanding there,” Chmelecki said.

As expected, the team did do outstanding at their area 12 meet. The NC-Harrison ROTC team landed in overall 3rd place out of 16 schools competing; for the more specific categories, their general athletics team placed 2nd overall, though they landed first in the 8×220 relay race. All-in-all, a satisfying (though admittedly disconcerting) end result to all their hard work.