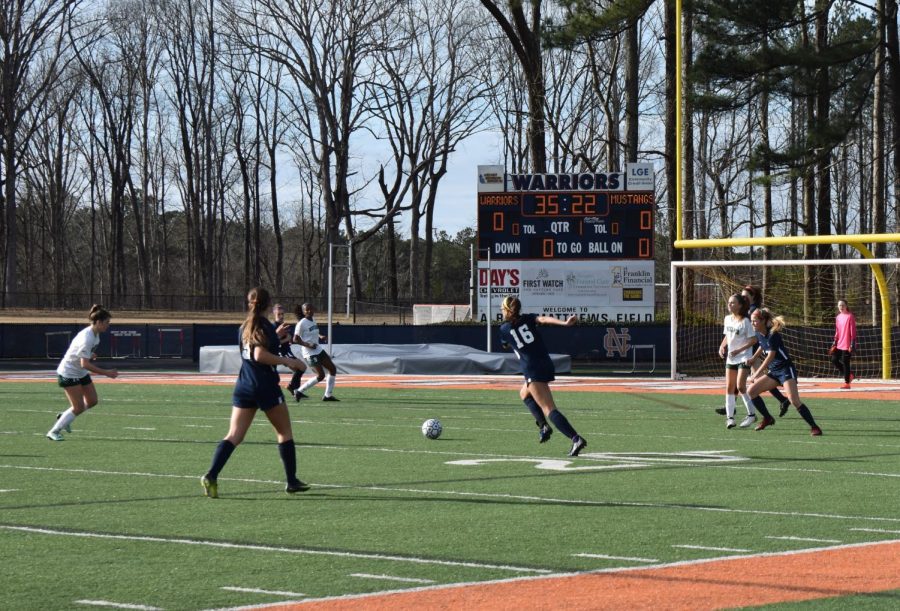 NC defense worked intently to keep Mustangs out of the home goal. With quick footwork, the girls powered through the first half with a positive and determined mindset. “I’m proud of our defensive lineup, and the girls really worked hard against the Mustangs. We tried our best to defend our goal and the positive outlook is all I could ask for from the girls,” sophomore Adriana Irizarry said.

NC Soccer hosted a fundraiser accepting donations towards the Lupus Foundation of America, and as they raised money for an important cause, the girls’ varsity soccer team took a loss against their rival, the Kennesaw Mountain Mustangs. Warriors spent the game focused on defending the field against the Mustangs, but lost with a score of 5-1 on March 11.

“Me and Josh, another senior on the boys’ team, have a friend whose sister suffers from Lupus and it’s really impacting her and her family—she did her senior project on it. We wanted to do something a little different, and that’s how we settled on the idea for fundraising for Lupus,” Captain and senior Hannah Schooler said.

During the first half, the Warriors maintained their defensive lineup by fighting back with intensity and managed to stay on top for ten minutes into the game, but the Mustangs pulled off a goal quickly, putting them into a lead they held for the rest of the game.

“The score definitely isn’t what we wanted to see, but I’m proud of the effort everyone put in. We just need to work on our communication and passing a little quicker,” Schooler said.
Less than a minute into the second half, the Mustangs managed a fast goal against the Warriors, bringing the score to 4-0. Despite the Warriors’ efforts, the Mustangs scored another goal from the 20-yard line, keeping their lead. The Kennesaw Mountain team maintained possession through the majority of the remaining second half, but the Warriors managed to make a minor bounce back towards the last minutes of the game. Sophomore Emily Labus made a strong kick from the 30-yard line, bumping the score up to 5-1.

Monday night, the Warriors gathered a total of just above $600 to donate to the Lupus Foundation, and despite their loss, remain determined and motivated to do better next game.

“I feel like this team has not found themselves yet and is capable of playing at a much higher level, they just need to look forward and be positive. They played hard Monday night, but we need to continue to improve as a team,” Varsity Girls Coach Justin Buckles said.