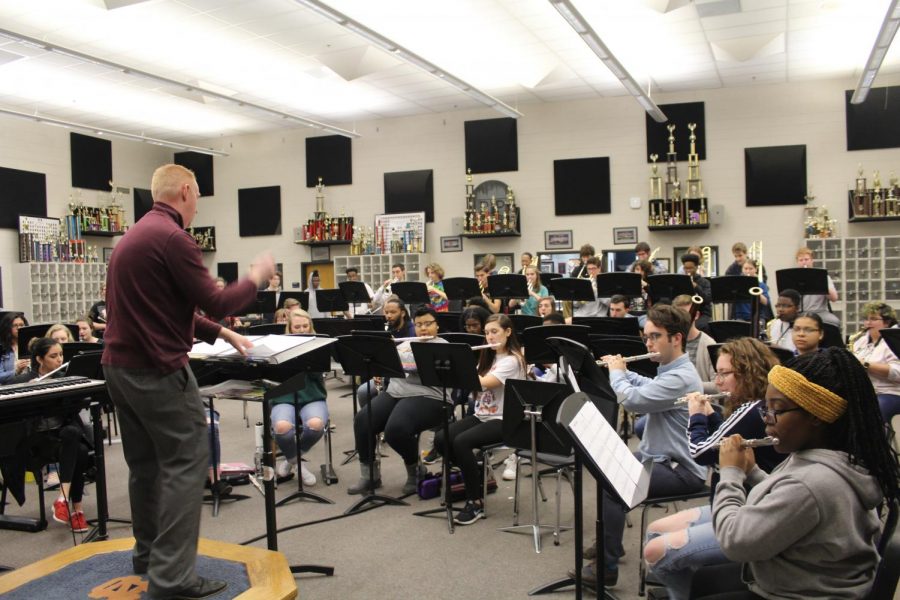 After three days at LGPE, the NC Band continues to hone their musical skills by practicing new music with Director Pannell (seen in red shirt). Though LGPE already came and went, the NC Band still plans to continue with their work; most notably, the band will perform at the Heritage Festival this Friday & Saturday, an event that will see bands and choral groups from across the nation perform in the PAC, and then tour Atlanta.

Ever since its 1958 establishment, the NC Warrior Band proved itself as one of, if not the definitive extracurricular group for the school. From their performances in the fall football games and the Color Guard events to the soundbites of their music played on select Fridays, and even their occasional morning jam session in front of the courtyard, the band consistently manages to stand out. However, they must still partake in events common to other bands, particularly the Large Group Performance Evaluation (LGPE).

“LGPE is the annual assessment of student achievement by every Cobb County musical ensemble. Directors choose literature that will demonstrate the various fundamental performance standards in the curriculum. The degree of literature difficulty ranges from Grade 1 for a novice performer, to Grade 6 for the advanced college-level performer; NC will perform literature at Grade 3 (Concert Band), Grade 5 (Symphonic Band), and Grade 6 (Wind Symphony). This evaluation is similar to the standardized tests or end of course exams given in other school courses,” lead band director Sheldon Frazier said.

In a way, LGPE plays out just like an EOC. The notion of an end-of-course (EOC) for band students, at least in theory, sounds like a fairly simple implementation: give students an assortment of sheet music to play, and grade their performance based on adherence to principles taught throughout the course. Though the system may seem straightforward, the specific content presented to students (not to mention the actual grading scale) reveals the complex system students must navigate.

“Students perform the music they have prepared over the semester, then they demonstrate their musical understanding by sight-reading a new piece of music. Three experts evaluate fundamental skills based on the prepared literature, and one expert evaluates the skills based on the literature being read for the first time. Clinicians also provide feedback to students and directors in a seminar following the prepared performance. Individual section evaluators offer commentary for families of instruments (woodwind, brass, and percussion). The student directors are also given video commentary from a conducting expert concerning musical communication and interpretation,” Frazier said.

With a grading structure as stringent as this, the NC Band must engage in the most backbreaking of rehearsals to prepare for LGPE. Before LGPE, the band partakes in regular practice sessions to take a more comprehensive approach to improve their craft.

“Everyday, we have a routine with our warm-ups, and after our warm-ups, we play all three songs that we do for LGPE. Most of the time, Director Frazier will make us do a full run of music and find spots that we didn’t do too good at, and he makes us repeat them; he might slow it down and make us air it or articulate it, and then we’ll play it together and improve from that,” sophomore trumpet player Lillian Southall said.

Taking all the prior information into account, LGPE sounds extremely stressful. Not only must the band members impress the nationally recognized judges with their sight-reading and regular performance, but they also must contend with competition from other schools, who likely practiced just as hard as NC. Couple all three obstacles with the fairly short amount of time allotted to play, and there seems every reason for confidence levels coming into LGPE to find themselves rather low. Despite the pressure, however, the NC Band seemed rather confident prior to their evaluation, due in no small part to a strong work ethic.

“Everybody in Wind Symphony has a lot of integrity. We have to stay for after-school practices until 6 p.m., and obviously, that’s not ideal for most schedules. I feel like JanFest helped us prepare for LGPE, which was much more intensive and very reflective of our work ethic. We can take a really hard thing and do, even more, we’re not going to burn out, we’ll keep working,” junior tuba player Isabella Markham said.

Their preparation certainly paid off: upon the event’s conclusion on Saturday evening, the band directors for all the schools received the results. According to the judges, the NC band earned an overall “Superior” score, with both the specific woodwind and brass sections earning a checkmark denoting proficiency in performance and sightreading; the NC Wind Symphony earned similar scores, with plus marks indicating above average capabilities.