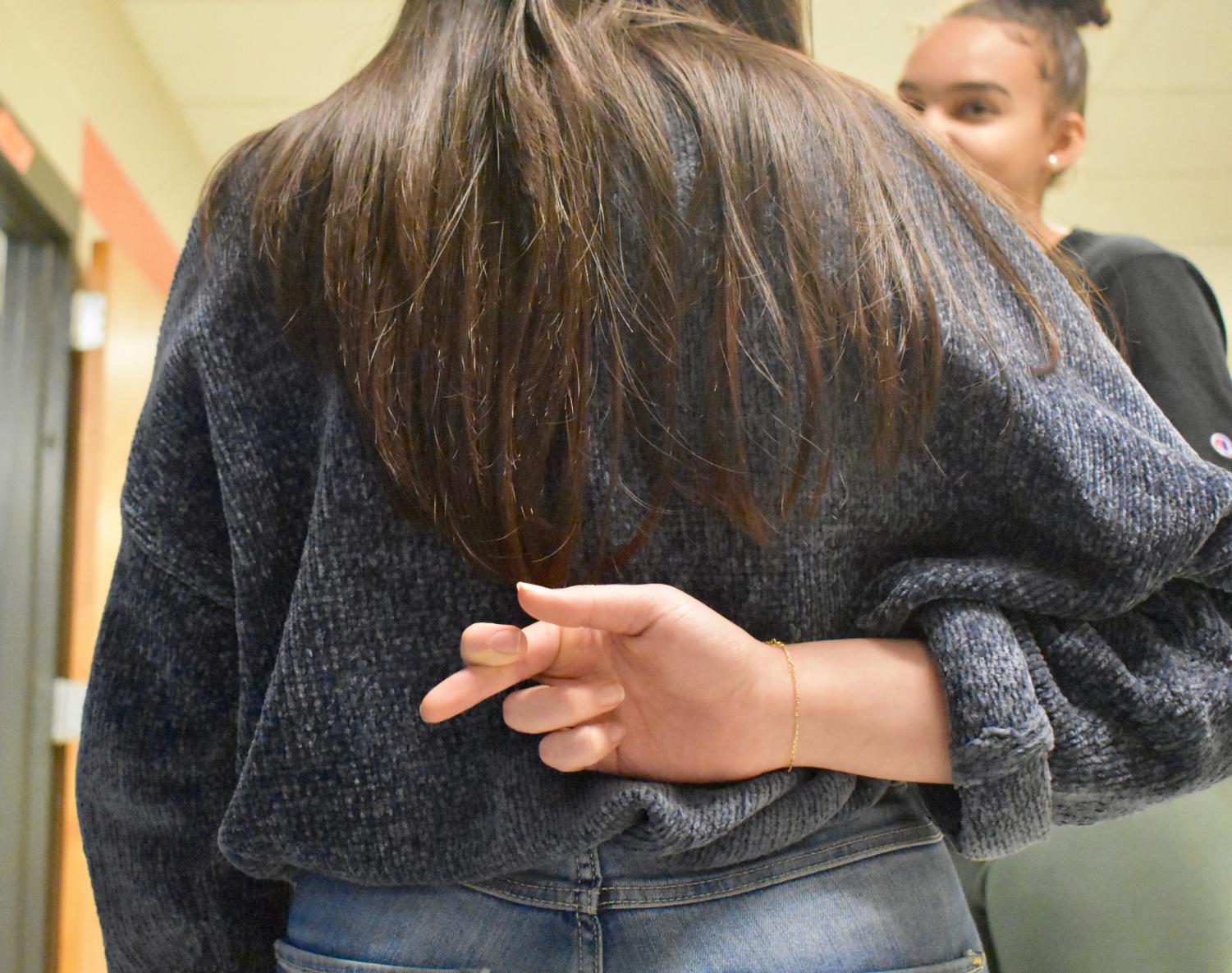 Everyone lies, and everyone knows that. People tend to not even think about their lies, but overlying can actually hold detrimental psychological effects and break down trusted relationships. Lies float around the halls of schools with students lying to teachers and teachers lying to students.

Everyone lies, and everyone knows that. People tend to not even think about their lies, but overlying can actually hold detrimental psychological effects and break down trusted relationships. Lies float around the halls of schools with students lying to teachers and teachers lying to students.

Students lie to teachers and teachers lie to students

People lie constantly, whether they mean to or not. Even the most honest people slip up and tell a white lie. Everyone lies. According to National Geographic, the average teenagers tell at least 3 lies over 24 hours. Adults tend to tell the truth more often, but this does not mean all adults never lie. Teachers and parents notoriously tell lies of varying degree to students.

High school, a place full of lies, often misleads students, leading them to over exaggerate the extremeness of a minor assignment. Failing that one state-mandated test, taking an on-level class versus the college-preparatory version: these decisions will not destroy your future, although teachers, parents, and counselors would like students to think this. The lies do not end there. Teachers lie to students. Students lie to teachers. Teachers lie to parents. Parents lie to students, and so on.

Not all lies hold detrimental consequences. In some cases people do not even mean to lie when they lie by mistake, also called an error lie. The person truly believes the lie. Teachers may tell students that high school determines the rest of their lives because they grew up with that mindset. Their own teachers and parents possibly told them the original untruth, so the lie continues in a vicious cycle.

Omission, leaving out relevant information, involves the least amount of guilt according to Eva Rykrsmith, an organizational psychologist. Students may tell a teacher they could not finish their homework due to busyness. They left out the minor detail that video games made them extremely “busy.” Teachers might tell their students that this (useless) information will prove helpful later in life. They leave out the detail that learning the Ideal Gas Law formula will only prove helpful if you decide to major in chemistry.

Both parents and teachers utilize another type of lie, exaggeration. Stressing the importance of a test or assignment in relation to their future only stresses the student out. Teachers exaggerate to parents how much they enjoy their child in a class. These little lies add up to major problems in schools. These lies wear out the liars and create unnecessary worry. Lies take a toll on building a strong relationship between teacher and student, a bond that could potentially increase focus and learning. These lies will only create greater consequences, such as breaking the trust between parents, teachers, and students.

One professor, James Lemoine, from the University of Buffalo School of Management preaches that lying to students helps them, not hurts. On the first day of class, he tells the class that not all of the material he teaches will seem factual. He instructs the students to debate with him if they find questionable the information taught. However, Lemoine fibs when he tells his students about this “game.” He does not actually teach inaccurate information. Lemoine wants to keep his students on their toes, which might seem like a good idea, but this untruthfulness breaks the trust between student and teacher.

Many people rationalize lying by saying that it will only do more good than harm. Even Lemoine, who says that with his lies he makes his students smarter, acts unethically. No matter the reason for lying, if everyone lies nobody could trust each other.

AP English Language and Composition teacher at NC, Lindsay Theaker teaches an entire unit based on Gandhi’s 7 Deadly Social Sins, many of which involve lying. She stresses transparency in her class due to this.

In the past, Theaker taught about how to tell if someone lies. Even the slightest hesitation can indicate a lie. When telling a lie, the body will naturally react in extremely minuscule ways. Pamela Meyer, expert “liespotter,” says that many people think liars do certain things that they actually do not. For example, people believe that avoiding eye contact indicates untruthfulness, but teenagers especially when lying will make direct eye contact.

When Bill Clinton sat on trial denying accusations of relations with Monica Lewinsky, he did not use contractions. Meyer calls this another “tell” for lying in her TED Talk, a sign that shows overdetermination in denial. Duping delight, appearing ever so slightly happy when lying, and shaking your head while saying “yes” or vice versa shows the truth behind a dishonest person. 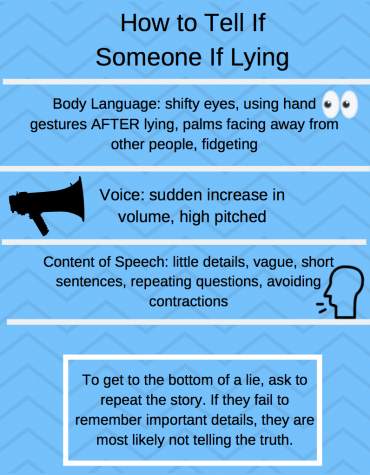 Academic dishonesty: any form of cheating that occurs in relation to a formal academic exercise. A type of lie some do not think of as a lie. Academic dishonesty can include cheating on a test, plagiarizing, or copying a classmate’s homework. Often, this lie results due to another lie. When adults, as many do, overstress the importance of a simple assignment knowing that in four years a couple of test grades will not matter, this lie leads students to create their own lies. The expectation of how one should perform leads all types of people to lie. Athletes will lie about taking performance-enhancing drugs, teachers will lie about their students’ test grades, and students will participate in academic dishonesty.

The New York Times says when a child lies it shows a sign of intelligence, but when teenagers lie, they do not get rewarded with an A. They receive consequences. It proves difficult to trust someone when they lie to you. A school must remain a place where students can learn efficiently and thoroughly, but for this to happen teachers and students need to establish meaningful relationships based on trust. Eliminating lies builds this trust.

“If students do not trust their teachers, they will have trouble believing the information being taught. Having doubt about the information will strain what is being absorbed,” sophomore Abbey Corley said.

Asking someone if they lie elicits a quick answer. Of course, everyone lies. When asked if a student lies to teachers, usually they will start listing: lying about doing the homework, understanding the concept, and cheating. The opposite occurs when asking an adult about their lies.

“I try not to lie, but I will admit to avoiding the truth and saying, for example, that how I feel about a student does not matter,” Assistant Principal, Kiel Southwell said.

Even trusted companies, presidents, and other government officials lie to the world, some lie over and over again. James W. Johnston, the former CEO of R.J. Reynolds Tobacco Company, once told the world, “cigarette smoking is no more ‘addictive’ than coffee, tea, or Twinkies.” The statement’s purpose to sell more cigarettes received a court order to apologize for the false information in an advertisement.

Research shows that even little fibs can lead to headaches, sadness, and stress. In a study performed by Anita Kelly, a psychology professor at the University of Notre Dame, she found that when telling the truth, health improved. As a matter of fact, telling three fewer minor lies per week meant four fewer mental health complaints and 3 fewer physical health complaints. Kelly reflected on this information and concurred that telling the truth improves relationships because people with strong relationships receive better physical and mental health. Participants found that completely cutting out lying, especially white lies, proved extremely difficult.

Removing lies from your life does not mean to tell people brutal truths. Instead, attempt to tell partial truths. If someone asks how a horrendous new shirt looks on them, do not lie and say it looks fantastic. Tell them the color accentuates their eyes. If eliminating lies holds important to you, surround yourself with those in agreement with honesty. Linda Stroh, a professor emeritus of organizational behavior at Loyola University in Chicago, warns people to acknowledge that those who lie ‘with you’ may lie ‘to you’ as well.