Someone Great, new adventures on Netflix 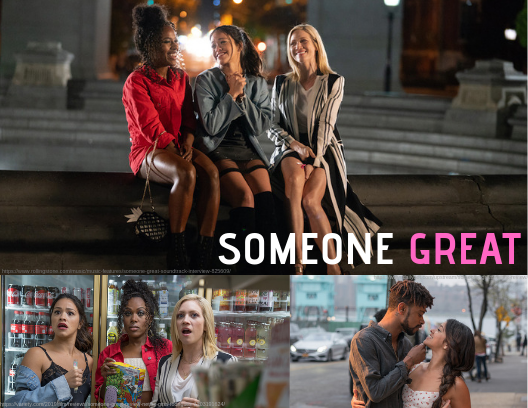 Someone Great encapsulates the journey of a girl coping with an imminent move and a tough breakup. Jenny (Gina Rodriguez) adventures with her friends and finds distractions to overcome overwhelming despair. A pleasant and easy watch, the film offers comedic relief to balance tough and heartbreaking scenes.

Essentially a break-up movie, the story begins with the main character Jenny, played by Gina Rodriguez, reflecting on the termination of her nine-year relationship to another young woman while standing in a New York subway station. Jenny reveals her job offer from Rolling Stone to her soon to be ex-boyfriend Nate, played by LaKeith Stanfield—a job offer requiring her to relocate from New York to San Francisco. Nate takes the news hard, makes clear his unwillingness to attempt long distance, and presents individualism and independent growth as his reasoning for initiating their split.

Someone Great follows Jenny through an alcohol-fueled, drug-enhanced adventure, keeping watchers engaged and amused. Relatability quickly establishes itself as a key component of the movie with Jenny accurately depicting the suffers from heartbreak and demonstrating the recognizable dynamics of close, longtime friendships. Best friends of Jenny, Erin and Blair, played by DeWanda Wise and Brittany Snow respectively, embark on a tedious and fun-filled journey with their broken-hearted bestie to acquire pop-up music festival tickets to ensure her a night of fun before her departure.

Robinson speaks more to the romance of friendship in her film than the romance between the couple. She highlights the importance of stable and nurturing friendships in one’s life during unstable times, possibly to pay homage. Jenny, although reaching a level of acceptance rather quickly, also portrays the letting go of love and the beginning of a healing process in a poetic and hopeful way.

The novelty of this Netflix movie sports the familiar cozy and romantic feel of several other Netflix originals like To All the Boys I’ve Loved Before and Sierra Burgess is a Loser, minus the adored Netflix star, Noah Centineo, of course. However, it does introduce a new plotline, and critics widely regard it as decent at the least, with scores of 60 percent and above on most major sites.

With an impressive and fitting soundtrack—expected from a former music journalist director—the movie offers a new spin on romantic comedies. Although obviously not the genre for everyone, break-ups and heartbreak occur more frequently than most victims would like, and Robinson’s film sparks the bittersweet feeling of remembrance for just that.

Ending on a hopeful yet final note, Someone Great challenges a traditional rom-com title, deemed so by a portion of viewers, deemed anti-romcom by others. Nevertheless, the movie can fit in plenty of the boxes delegated for it, which makes it at least a bit special.