Are you guilty of a deadly sin? 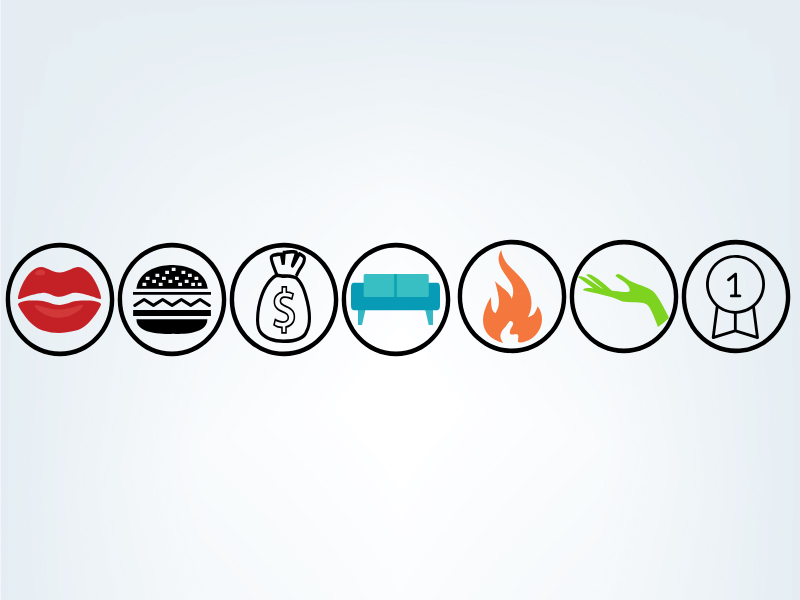 The seven deadly sins present themselves in a number of differeny ways in modern society. Lust, gluttony, greed, sloth, anger, envy, and pride can drive people to perform crazy acts. According to the Bible, the sinful influences that lie underneath these seven sins further one away from God.

During the fourth century, Greek philosopher Evagrius of Pontus first drew up a list of eight sins that described evil human passions tied to human destruction. Evagrius arranged the list in order of seriousness: gluttony, lust, avarice, sadness, anger, acedia, vainglory, and pride. The basis of judgment used to determine the escalating severity of these sins resulted from the level of increasing fixation with oneself, which makes pride the most sinful of all eight sins. However, in the late sixth century, Pope Gregory the Great shortened the list by combining vainglory with pride, acedia with sadness, and adding envy. Pope Gregory the Great believed that the seven sins he listed offended the concept of love, and he created the list more commonly known today: pride, envy, anger, sadness (sloth), avarice (covetousness, greed), gluttony, and lust.

Over the course of the Middle Ages, the Catholic church focused heavily on relaying the Deadly Sins to its parishioners, and people truly believed that God would steer them away from performing these sins. In The Picture Book of Devils, Demons, and Witchcraft by Ernst and Johanna Lehner, each sin received a specific punishment in Hell, which of course, Catholics did not want.

As a member of the Church of God, junior Faith Jean grew up in a family where following the Bible drives every aspect of life. She learned from an early age how to follow the Bible word for word and how her sins affect her relationship with God.

“The denomination I grew up in is called the Church of God, and they basically just follow everything in the Bible to a tee, so the Bible is the way of life. If you’re not doing it the way they did it, it’s wrong,” junior Faith Jean said.

Described as excessive belief in one’s own abilities, pride inserts itself into a handful of different modern situations. For example, sports fans typically take pride in what team they support, which can sometimes lead to tension between these groups. Also, defensiveness within an argument derives from possessing too much pride. If unwilling to admit fault, one possesses too much pride to take responsibility for their part in the disagreement. People who hold an excessive amount of pride will never ask anyone for help, and if applying it in terms of religion, they will never cry out for a Savior.

Social media can create an inflated ego within someone if they receive a certain amount of likes on a post or comments telling them how amazing they look. However, if on their next post they fail to receive the same amount or more, a sudden feeling of worthlessness occurs. Constantly checking stats on a recent social media post can do more harm than good and shows signs of an excessive amount of pride.

However, positive pride can outshine negative pride in a multitude of ways. At NC, students take immense pride in their sports teams, especially football. As one of the most important aspects of the school, the football season always brings out a large student section, showing just how prideful NC’s students behave. In addition to sports teams, NC shows its pride for hard work and dedication through posting GPA posters at the front of the school to honor those earning high grades.

In a conversation with friends, nothing makes people more annoyed than someone who one-ups everything said. “One-uppers” try to beat the stories or experiences someone went through to bring the attention back to themselves. Egocentric and narcissistic people typically possess the most pride, which can ultimately land them in hot waters.

In a modern society where owning the next best gadget takes extreme precedence, envy occurs more in the twenty-first century than ever before. Envy means to want what others own: status, abilities, or possessions.

“Envy affects society because now with social media, you can see what everyone is doing and what they have. People are most envious of what they own, but you don’t know what’s happening behind the picture,” Jean said.

Once again the presence of social networking allows for one to compare themselves to the status or appearance of others and become envious of what they possess. While the other six deadly sins allow for pleasure and enjoyment in a positive light, envy dims one’s mood and creates a lack of motivation. Young children display tendencies to become envious of a toy that one of their classmates owns, or they become envious of a myriad of different possessions that they know they cannot receive. Simply put, they do not understand how to control envy and the way it ravages the mind. Typically, when envious of someone or something, giving up seems like the best option. As humans grow older envy seems to disappear, but it lingers in silence because people learn over time to keep it to themselves and mature past their fixation. 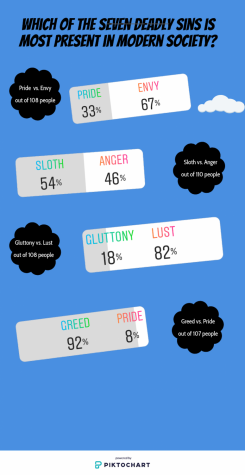 Gluttony, the desire to eat or consume more than required, manifests mostly in modern American food culture. Serving sizes in the United States compared to that of other countries exponentially grow and not in a good way. Since 1950, the serving size of a fast food meal in America quadrupled in size, which demonstrates just how drastic American eating habits changed. Over the last seventy-odd years, gluttonous behavior took over the United States, ultimately leading to a massive increase in the obesity rate.

“Gluttony is basically indulging; there’s nothing wrong with indulging and pampering yourself from time to time, but of course, if it’s overdone it could become a problem,” Jean said.

As of 2015-2016, the Center for Disease Control charted the prevalence of obesity at 39.8 percent of the US population or almost 95 million people. As a result of gluttonous behavior, almost a third of the country suffers from obesity. Compared to Japan, whose obesity rate stands at 3.2 percent, one can only wonder how food culture and eating habits differentiate modern Japan and the United States.

To gorge oneself from an enormous pile of food seems like the last sin anyone would want to commit. However, gluttony appears to only get worse as times passes, considering that gluttony became a sin thousands of years ago and all.

Perhaps the most blinding sin of all seven, lust can blindside people into making terrible decisions. Defined as a powerful craving for sex, power, or money, it appeals to all five senses in a pleasurable way, making it that much more addictive.

When considering the origins of the seven deadly sins, incorporating lust seems fitting with two out of the ten commandments relating to adultery. Centuries ago the church taught that committing these sins commended one to a life in hell because the notion of adultery, let alone sexual desire, would land one a seat next to the devil.

As a more modern twist to the two commandments, the growing pornography industry makes it extremely difficult to avoid lust. People become addicted to watching these graphic videos because lust gives a momentary feeling of happiness and pleasure, which to the human body, can become highly addictive and toxic all at once. Sex releases oxytocin (love hormone), as well as endorphins, which cause happiness levels to increase. These modern aspects drive people to come back to please their sexual desires over and over, ultimately leading them to commit the sin of lust.

As the most harmful to others, the sin of anger takes shape as the loss of rational self-control and the desire to harm others. Much like lust, anger’s roots come from the ten commandments. Its use in the Bible, as well as Catholic teachings, derive from the fifth commandment “Thou shalt not kill.” While committing a murder still indicates underlying anger, modern “anger issues” arise in a completely different way.

“Having anger issues is basically getting upset over the tiniest things to the point where people don’t want to be around you. Like if someone looks at you the wrong way, you want to start a fight, or something happens to you at work and you want to slash someone’s tires,” Jean said.

Anger can truly bring out the worst in people. Instead of acting calmly in certain situations, people tend to react instead of act. Contemporary anger escalates quickly, usually from something that started off small. Rational decision making quickly dissipates in high-stress situations, connecting modern anger to that of the original fourth-century definition of anger.

Today, the emphasis on monetary value completely saturates American society. Greed, the desire for material wealth or gain, destroys relationships due to the amount of selfishness associated with it. As time passes, greed only appears to worsen.

A perfect modern example of greed lies within the business sector of society. Businesses strive to make the most money compared to their competitors; a handful of them will take extreme measures, whether harmful or not, to a make a buck.  The corporate world scams citizens to make a profit, all in the name of greed.

As another profession riddled with greed, 80 percent of Americans feel that politicians act with only self-interest in mind. While government corruption does not come as a foreign concept to Americans, its greedy side effects only appear to worsen over time. President Donald Trump promised in his presidential campaign to “drain the swamp” of corrupt government officials; however, President Trump only seems interested in creating policies that benefit the incredibly wealthy. According to prominent political figures such as Bernie Sanders and Ted Cruz, the current situation in D.C. only works for the “one percent, rather than the people at large.”

“Greed is the underlying problem amongst all of the seven deadly sins,” Jean said.

When thinking of the word “sloth”, one may think of the slow-moving animals from the movie Ice Age or the amusingly hilarious sloth from Zootopia. Much like the slow-moving animals from these films, the definition reflects the demeanor of these animals. Sloth, the avoidance of work and laziness, does not come as a foreign concept to teenagers. With the amount of school work and social obligations, becoming lazy seems almost inevitable.

“Being a student, friend, and employee all require a lot of time and energy to make them work, so trying to balance it all, like being a good student, but being a good friend, while going to work and doing a good job, it’s hard to balance it because they all require different things. Sometimes people are just tired to the point where they just want to do absolutely nothing,” Jean said.

The most common form of sloth, procrastination, makes it easier to avoid doing work opting for stress later on. When people would rather do anything else but work, showing a lack of motivation, it ultimately leads to someone becoming slothful.