End of an era: Avengers: Endgame is a poignant but messy conclusion to modern Marvel 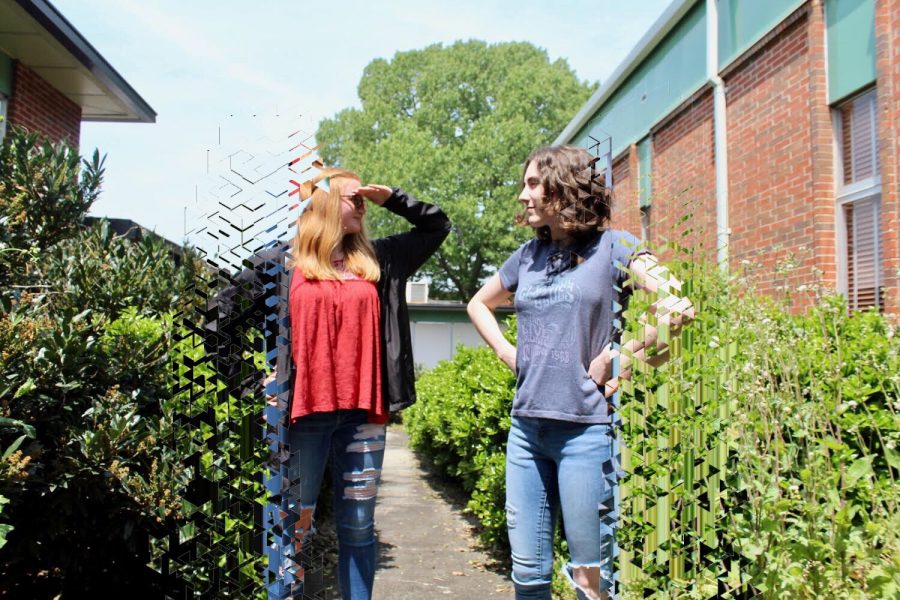 Magnet juniors Abigail Bierman and Abbey Blosser pose in their best superhero pose in honor of Avengers: Endgame which released Friday, April 26. The movie made fans endure an emotional rollercoaster as viewers laughed, cheered, and cried. “It was definitely an emotional rollercoaster since I did not know if I should be cheering or crying the whole time. Overall, the movie was fantastic even though I am upset with how it ended,” Bierman said.

If you went back in time to 2005 and told anyone working at the then-nascent Marvel Studios that in just thirteen years, they would produce films that would break nearly 150 box office records, they would more than likely stare in disbelief. To make any money, the company (the first major independent studio at the time since Dreamworks) relied upon other characters that, while just as influential in the comics as the Webhead or Merry Mutants, lacked a place among the public zeitgeist. With their first film slated to focus on Iron Man, director Jon Favreau made the oddball choice to hire Robert Downey Jr. in the title role, making cinematic history.

Now, fourteen years after the founding of Marvel Studios and eleven after the release of the first Iron Man, the Marvel Cinematic Universe (MCU) now finds itself as a mainstay of modern culture: the Star Wars of a new generation. Quotes like “I am Iron Man” and “I can do this all day” find themselves as popular as the likes of “Doh!” and “I am your father.” Looking beyond the intense Marvel fandom, the series sits as one of the highest grossing media franchises, but more importantly, as easily the highest grossing film franchise of all time at nearly $20 billion. Considering the major financial and critical success of this series, it seems like a given that it would never stop making movies. The latest MCU film, 2019’s Avengers: Endgame, represents the end of the MCU moviegoers fell in love with all those years. Marketed as the “culmination of the Marvel Cinematic Universe, the film takes place right after the devastating end of 2018’s Avengers: Infinity War, which saw the cosmic despot Thanos snap away half of all life in the universe.

Without any spoilers, the plot of Endgame takes viewers on an extremely emotional ride, managing to find the ideal between Marvel’s trademark snark and legitimately emotional moments. Hardcore Marvel devotees will notice the countless callbacks, guest appearances, and references to the greater universe, truly tying the series together; but instead of Easter eggs for their own sake or nostalgia bait, each and every callback to the MCU plays a critical role to either the plot of the films or the characters involved.

A common complaint of the MCU deals with the visuals of their films: dull color palettes, static cinematography, and a generally uniform style. It seems like directors Joe and Anthony Russo took those complaints to heart, as the direction of this film remains one of its most underrepresented benefits. The film possesses its fair share of visually stunning shots (mainly in the first act), the camera moves in dynamic ways that up the ante for action without coming off as excessive, allowing quieter moments to land with the needed punch.

The film, however, still possesses its fair share of legitimate issues. For one, the first three scenes in the film yo-yo between tones: it starts dramatic and somber (with thriller-esque cinematography), then yanks viewers into joke territory only to zip right back into an extremely depressing moment. Most MCU movies suffer from this to an extent, but considering this movie deals with the ramifications of the deaths of half of all life in the universe, a more consistently dark (or consistent in general) tone seems obvious.

Speaking of death, the film passes up an opportunity for great worldbuilding by examining how the larger MCU dealt with the Snap in exchange for loose vignettes of our heroes barely tied into the larger plot. Coupled with a poorly paced first fifteen minutes, inconsistent internal logic that breaks the rock-solid continuity, and a shockingly brief resolution for Captain America and Tony’s conflict that drove the first two Avengers films and Civil War, the first act and a half may prove as a slog on future rewatches.

The most notable issue with the film, however, deals with the writing of three particular characters: Hawkeye, Hulk, and Thor. Jeremy Renner gives as good a performance as the mighty marksman, and nothing inherently bad happens with him: his time and mindset as Ronin lack anything resembling development in this film or any foreshadowing in prior ones. Thor, though certainly a crowd pleaser for humor, suffers from a backward evolution of his arc in Infinity War bordering on character assassination. Sadly, the Hulk finds himself holding the shortest end of the broken sticks. Though the character seemed to lose his depth after Age of Ultron, the character starts his role in the film as the main player with a literal joke, an unfunny one saved by Paul Rudd’s affable Ant-Man. No resolution to his romance with Black Widow, no coming to terms with his loss to Thanos, and the conclusion to the Hulk-Banner conflict driving his entire character takes place over a time skip and only earns the briefest of mentions. It should sadden viewers to see how far the Jade Giant fell in just four years.

Despite that, the film succeeds on its one promise: Endgame pays off everything that has happened in all 21 films leading up to it in what may go down as the greatest third act in film: perfect balance of humor and heart, stunning visuals perfectly emulating the comic splash page, and moments to remember for years to come. This film truly marks the end of an era in pop culture, best represented by its flagship characters: Iron Man and Captain America. Without spoilers, this film marks a definite end to the stories of the mind and heart of the Avengers, these two icons that an entire generation grew up alongside.

Avengers: Endgame will surely bring all in attendance to both raving applause and gut-wrenching tears. As the end of an era, this may break the hearts of most moviegoers. However, as Tony Stark said so eloquently in the first trailer for this film, “Part of the journey is the end,” and nothing better describes Avengers: Endgame than this.