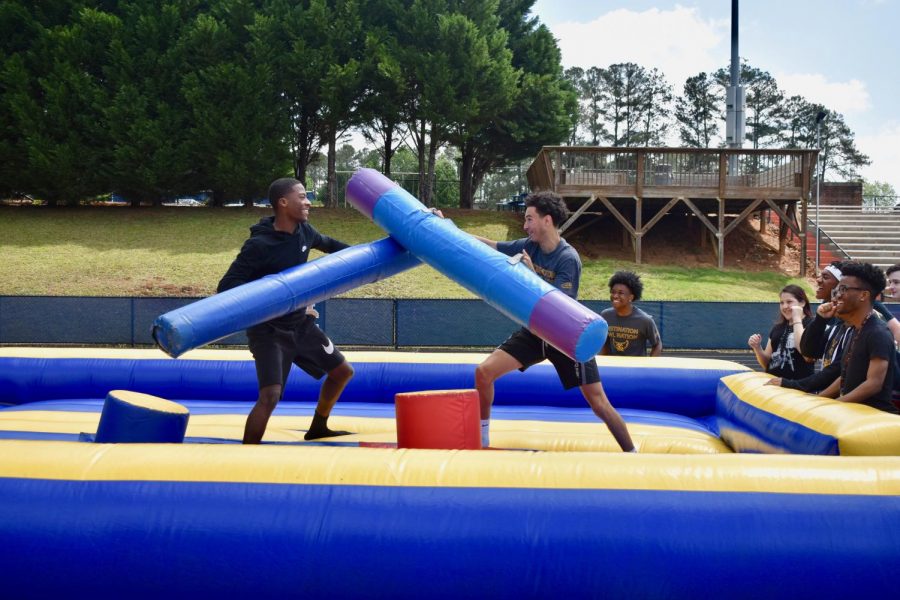 The Senior Carnival provided friendly competition allowing seniors to come together, joust one another, and see who would remain as the last one standing To start the joust, competitors stood on the elevated platforms and whacked one another, which became a popular game among the seniors. “I say NC is getting better and better every year. I hope this carries on in the years to come, especially with Mr. Moody as the principal,” senior Nico Eastep said.

A day of fun-filled festivities, NC hosted a celebration for seniors on April 26. Putting up bouncy castles, tug-of-war rope, and field sports, students frolicked around the football field through the end of the day after a heartfelt breakfast.

“I would say this Senior Day was a good way to commemorate the senior class and something I hope will continue in the future. I really enjoyed it,” senior Ava Wonn said.

Graduating seniors, after checking in with their first period, rushed to the Performing Arts Center (PAC) for the announcement of senior superlatives. After the announcements, students received letters from friends and family, some even from previous teachers. With tearful eyes, students ate the continental breakfast provided for them and reminisced with friends about the past four years.

After a full second period, the students spent their third and fourth period in the football field. Laughing and dancing to music, the students celebrated their last few weeks at NC. Cooking fresh burgers and hotdogs, some NC staff like AP Literature teacher Laura Foster helped distribute the goodies with help from North Star volunteers.

“[Passing food out] went very well. North Star cooked all the food and we just did the assembling, but it certainly was a mammoth undertaking,” Foster said.

Assorted bouncy castles littered the football field and crowds gathered as students huddled to watched people bounce about. Shouts of joy filled the area as the students arranged themselves into mock sports teams, throwing the football, playing soccer, and diving for volleyballs. The largest attraction, a small blow up arena, gave students an opportunity to duke it out for the last time. Given a soft blow-up bat, students battered each other to knock each other off of a raised position. Large crowds gathered to see the battles and root on their favorite gladiator.

Finishing off the energetic day, NC held their last pep rally of the year to celebrate spring sports. Dancing and celebrating their successful season, students welcomed their new Step team—called the SWAT team—who stomped their way into the seniors’ hearts.

“I think [Senior Day] was nice and similar to things from years past, but with a  wonderful new twist,” Foster said.

Dancing the day to an end, seniors called the school day to a close after hours of fun and good times. Thanks to the new additions to the traditional Senior Day, it will serve as one of the most rewarding parts of senior year for years to come.