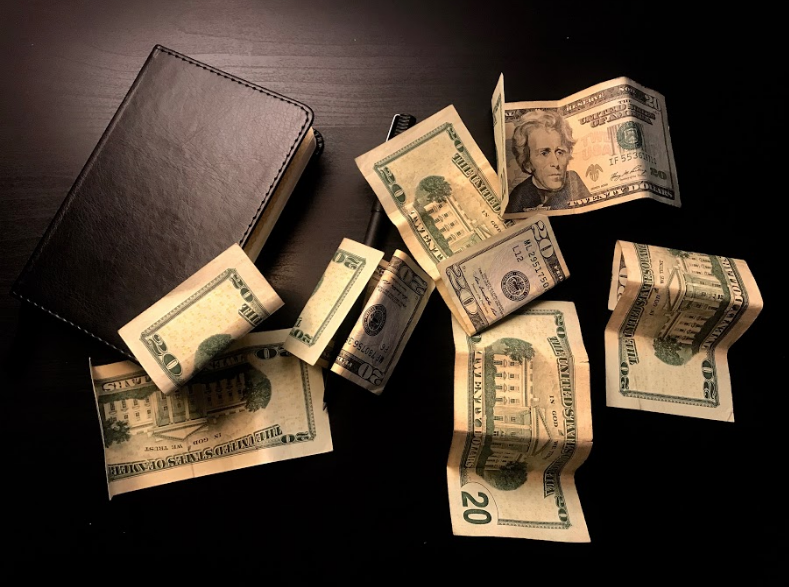 At first glance, a desk covered in cash brings about a smile, but rising college freshmen must truly consider what makes them happy—a basic wage from a beloved profession, an abundance of money with a less enjoyable job, or a balance between the two. “Making compromises is key. Find something you enjoy that can also support your financial needs,” senior Miller McWilliams said. (Esteban Alarcon)

At first glance, a desk covered in cash brings about a smile, but rising college freshmen must truly consider what makes them happy—a basic wage from a beloved profession, an abundance of money with a less enjoyable job, or a balance between the two. “Making compromises is key. Find something you enjoy that can also support your financial needs,” senior Miller McWilliams said.

Money, happiness, or both?

Can anyone find a balance?

Such existential questions riddle the exhausted minds of seniors when the cursor meets the question box: “What is your selected major?” The NC class of 2019 offers a new generation of students with a variety of skills and ambitions and analyzing their motivations for their professional careers can categorize and reflect the values of the rising college freshmen graduating this May.

“Money can buy you happiness, but only a certain amount. Researchers defined life satisfaction as an overall assessment of how one is doing, while emotional well-being refers to a person’s day-to-day feelings such as happiness, sadness, excitement or anger,” a Marketwatch research report said.

To simplify the decision into an ultimatum between financial stability and satisfaction does not align with the constantly shifting circumstances of reality; one must also consider that the importance of money and happiness not only has gravity in one’s professional life but also in that of the college experience itself.

“I would say it’s a little bit of both. Enjoyment of your profession is key because a lot of times your job becomes a part of your personal life. I chose civil and environmental engineering because it is an exciting field in which I excel at. It also pays the bills, so that’s a plus,” senior Reed Walker said.

When choosing a college major, a student prioritizing happiness should not only secure it for the future working career, but also make sure that the major will illicit wonder, enjoyment, and satisfaction during the years of college. In studying a profession that caters to the passions of a student, he or she would focus more on the subject thereby growing less susceptible to distraction.

“In choosing my major [environmental engineering] at the University of Georgia (UGA) , I considered happiness the most—or at least a subject that I would be interested in, because making it through tough classes and countless distractions would be even harder if I wasn’t even interested in the subject I was studying,” senior and rising UGA freshman Ashlyn Daughenbaugh said.

Furthermore, pursuing happiness not only benefits the student but also the future employer. A Leadingteams.net study found that “employees that are happy in their organization commit twice as much time to their tasks than those that are not happy. Happy team members have 65 percent more energy than unhappy employees.” Happiness, satisfaction, and emotional well being undeniably hold significance when selecting a major. However, romanticizing the importance of happiness in a profession while diluting the influence of other factors, such as income, practicality, and the marketable value of the degree, can mislead a student into a spiral of student loan debt and wasted years of studying.

The least fiscally valuable college majors, such as clinical psychology, drama and theater arts, and English composition/speech, could cater to the passions of rising college freshmen, however, these majors could also exemplify the result of letting the pursuit of happiness cloud the importance of a sustainable income.

“Money most definitely had more influence on choosing my major than happiness did. Financial stability is key, the happiness is a bonus,” Kennesaw State University freshman and mechanical engineering major Jose Muñoz said.

The pursuit of financial stability can have an equally influential role as the pursuit of happiness when choosing a major. One must not immediately associate greed with the prioritization of money. Choosing a career based off of its potential fiscal output exhibits a sense of preparation and an understanding of reality.

Despite the potential that money has, using it as your only fuel for motivation could result in a depleted engine and an unclear destination. Money does not buy happiness. In a life story that reflects the rest of its kind, Tom Bilyeu found himself prioritizing money and discrediting the importance of passion, a mentality that bound him to dissatisfaction and unfulfilling materialism. However, when Bilyeu reorganized his intentions and placed more value into his happiness, he found a sense of purpose and joy.

Undeniably, money impacts the day-to-day world. The degree of influence that money has on someone’s decision making heavily depends on the ideal lifestyle of each individual. Those looking to gain affluence may choose a career that does not necessarily cater to their passion for drawing, romance novels, or marine life, rather they would choose a career that offers marketable value and a return on investment (ROI). Furthermore, living an extravagantly wealthy lifestyle with the sacrifice of a rigorous, less enjoyable job may define this sought out happiness.

On the other hand, prioritizing money may just serve a basic purpose—to live a comfortable lifestyle where financial stability does not pose issues, while an exotic car does not necessarily occupy the garage either. Essentially, there exists no single objective definition of true satisfaction and happiness.

“I would like to be financially stable in the future and have the ability to provide for my family. I want to choose a major that provides a comfortable lifestyle and a happy one too,” senior and aspiring medical school student Abir Ghallab said.

Despite the importance of money in such a money hungry world, currency would have a mediocre purpose if happiness did not exist. As one would invest into anything, earning money and spending it contributes to the foundation of a stable and happy life. Reversely, a passion often comes second to basic needs and wants that only money can remedy. Essentially, money and happiness compliment one another. No statistics nor anecdotes need to support the fact that joy and financial stability come hand in hand to develop an overall good life—yet another definition that varies depending on the individual.

Whether a student’s motivation derives more from money, happiness, or both solely depends on them. Regardless, students must not view money and happiness as mutually exclusive.

Rising college freshmen selecting a major should adopt a balanced mind when making such an important decision. Allowing happiness to have too much influence could threaten future financial stability and disregard what an employer actually desires in an ideal employee. Likewise, allowing money to have too much of an influence on the decision could determine that a student work painfully long hours in an office they do not want to work in.

“I think someone balances the two by truly reflecting on what they want. It’s important to fully understand what matters the most to you and to realize that compromises need to be made. It’s important to be flexible and always keep in mind what you plan to gain from your life,” Ghallab said.