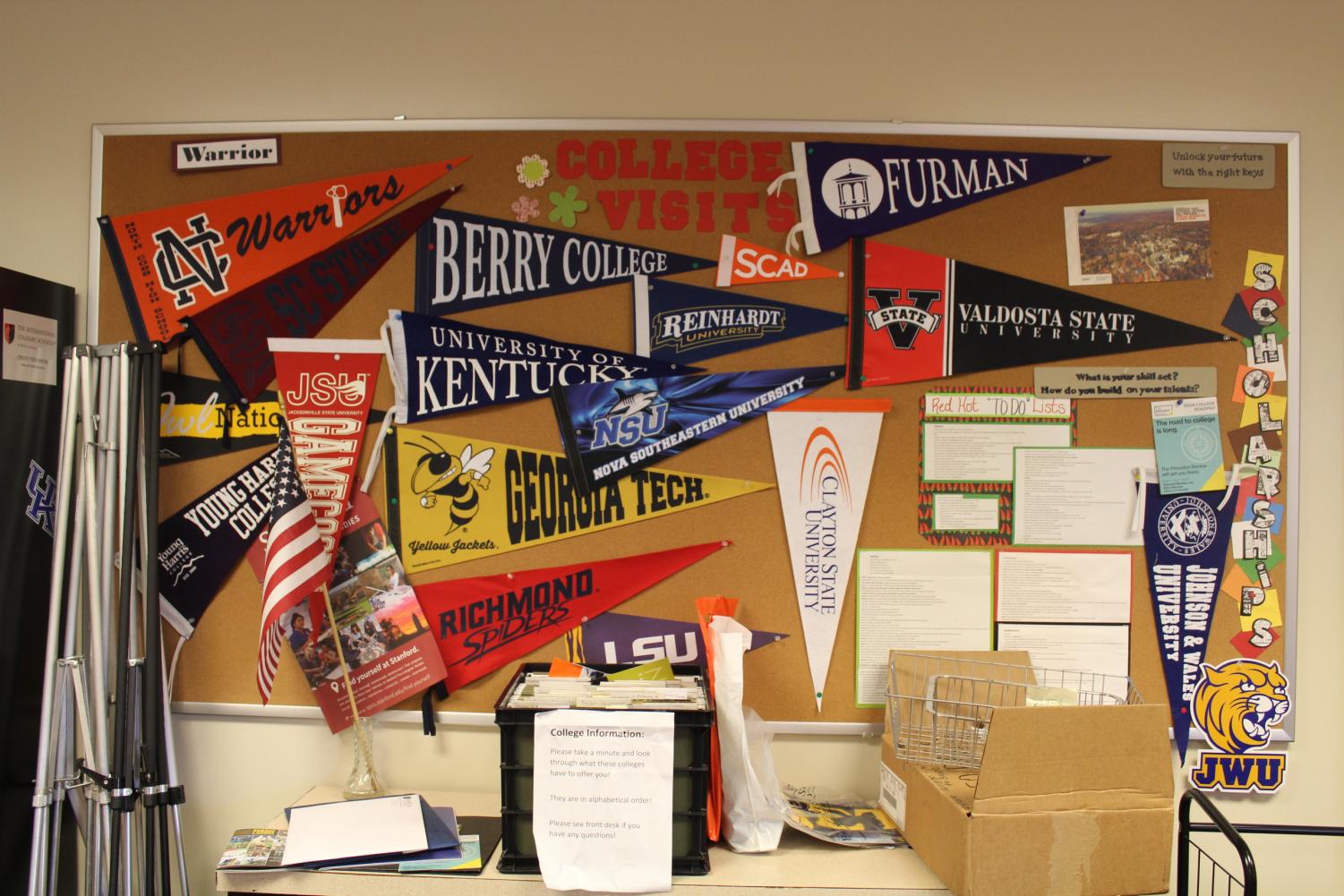 The Future Shop, stores all the college information available for students to discover and research. Banners and posters hang around the room advertising prospective colleges for their futures. “The future shop is a great place to go when I’m in need of direction. I often visit the room when I’m looking for advice on what to do after I graduate high school,” said junior magnet student, Katie Word. (Michelle Lin)

The Future Shop, stores all the college information available for students to discover and research. Banners and posters hang around the room advertising prospective colleges for their futures. “The future shop is a great place to go when I’m in need of direction. I often visit the room when I’m looking for advice on what to do after I graduate high school,” said junior magnet student, Katie Word.

Beginning in December and ending in April, NC seniors spend their last semester deciding on their colleges of choice. Commonly, students will decide on a specific college for which they strive, also known as their dream school. All parents hope to see their child one day live in wealth and happiness, but in order to do that, students need to achieve the first step: getting into a respected college. Consider the Chief Justice of the US Supreme Court, John Roberts from Harvard, or former president George W. Bush from Yale, or billionaire founder of Amazon Jeff Bezos from Princeton, for examples. They all graduated from their dream Ivy League school to become rich and famous. However, as wonderful as earning acceptance to these schools would sound, top colleges can equal overpriced tuition. So would one choose to give up their dream school to dodge those debts? Which option would one consider more important: a good name or a good price?

Of course, an acceptance letter to a school like Amherst, UPenn, Stanford, Columbia, or Duke would make for a dream come true. However, when it comes to these top-ranked universities in the US, money also plays a huge role in making one’s decisions. If one could afford to go to one’s dream school, nothing ought to stop one from going to it. When it comes to out-of-state tuition, though, scholarships seem much harder to find, and even when one does get a scholarship, it usually doesn’t pay as much.

In America, Harvard has always served as the college with the highest reputation and the most respected alumni. When someone tells one he/she went to Harvard, one would automatically think that person the most professional, flawless candidate for the job. Too many frequently forget that countless more lawyers and doctors out there did not go to such a top-reputed school, yet they have managed to run a huge business or company.

“A lot of people don’t value the state school education enough, considering it actually gets you a quality education in an affordable way and that way you can start making money without paying as much back in student loan debt. You’ll actually have more money to spend and also more money to be able to carry yourself up [to] the corporate chain and rank up faster while other people are still paying off debt,” said junior Chandler Quaile.

UGA harbors an exceptional veterinary program, yet few pay attention or know about it because they focus so heavily on getting accepted to Emory for veterinary school. Students and parents concentrate so single-mindedly on the name of a school that they have forgotten that in the real outside world, few jobs or businesses will actually pay that much attention to the prestige of one’s college. In fact, if two people work at the same job, one will not earn more than the other because he/she went to a college with a higher ranking.

Looking for a college primarily depends on the major the student wants to pursue. A second college choice that offers the same benefits with more affordability should not fall behind the first choice.

“There are so many colleges out there that’s a lot more affordable. It’s really important to know that you should look [at] what colleges are best for your major. Just because it’s a great name doesn’t mean it’s great in your major. Affordability has to come first because it’s not worth bankrupting yourself for a university when you can choose the next best alternative. Obviously, the name is important, but you should definitely not rule out the financial cost ability,” said Quaile.

NC senior Tess Thompson got accepted into the University of Florida, her absolute dream school. However, UF did not offer her enough scholarships, forcing Thompson to decide if she wants to attend the school of her dreams or choose the cheaper alternative, UGA.

Going to college constitutes not only studying hard to achieve one’s degree but also living one’s best life while one’s at it. Debt will not only push pressure onto one’s back, but it will prevent one from enjoying one’s life. One must manage all one’s schoolwork and, at the same time, figure out how to keep one’s money from coming into one’s bank account to pay through debt. This situation can lead to major stress and affect one’s performance in one’s classes.

“If I can’t enjoy my four years at the college because I don’t have the money to enjoy it with, I would rather go to the cheaper school. If you’re not happy because you don’t have enough money to join a sorority, go shopping, or go out to dinner with your friends, is it really worth sacrificing happiness for a school rank?” junior Valencia Ajeh said.

Debt should not prevent anybody from conquering his or her dream. If one goes to a school that either gives the student full tuition or only needs him or her to pay a little amount of money, one can focus more on one’s studies without always worrying about finding a job. Then, in the future, if one succeeds in their studies, businesses may automatically offer internships or jobs.

Students do not need to attend a school with a high profile if it costs more than they expect. By the time students pursue their dream college and step into the real world as they start families, they struggle with their fears of major debt. Not taking on debt may seem like a better choice, but every decision carries two sides. Giving up one’s dream school for a more affordable one also possesses its cons; if a student gains access to a top school, there exists little reason to give up something so quickly. Not frequently do people receive the opportunity to attend an Ivy League or an elite college, and giving that choice up to dodge a few years of debt may well prove unreasonable.

“I would rather choose the school with the better, more expensive school because you can really only do life once. If I went to the more affordable school, yes, at the end of the day I would be saving money, but in the back of my head, I’m always going to be thinking about the possibility of what kind of job or connections the other school would’ve brought me,” junior Adesuwa Obasuyi said.

First of all, if one displays the chops to get into a school like Harvard or Princeton, then there probably remain a sizable bundle of outside scholarships and financial aid waiting for collection. It may take numerous scholarships to get rid of that huge amount of debt, but one can do it.

Second of all, such elite schools allow students much more opportunity to search for a job and get one. Names of schools can still form an important factor if one emphasizes it. Going to a school known for its good reputation would demonstrate how hard one worked to earn admission and keep the grades to stay at that school. If one works that hard and gives up the good name for anything less, jobs won’t ever know how hard one exactly worked. They will never know he or she could have attended such a respected school.

“The school that you go to represents how hard you’ve worked to get where you’re at now. Jobs will definitely see that. You’re more likely to get the job if your boss realizes that you went Harvard compared to the other person that also wants the job who went to Chattahoochee Tech,” Ajeh said.

It proves much easier to extricate oneself from debt if they attend an Ivy League rather than a lesser college. One may hold debt, but due to all the connections and internships obtained at that school, in no time, one will escape it. Success proves much easier if one goes to a school that offers the best education. People will see that one values hard work and dedication, and debts will no longer pose a problem.

“In today’s time, applying for a job is more about connections, who you know, who knows you, and how you can network to get to the point where you want to be. More businesses are going to find you if you go to a bigger, popular state school rather than a school that’s small and cheap. Even people like Steve Jobs and Bill Gates; they may have dropped out of college, but that’s where they got their connections from. Those connections that they found at college led them to become [sic] billionaires,” says Obasuyi.

When choosing between an affordable college or a dream college, one must consider two different perspectives. They can go to a more affordable college with a less popular name but not ever have to worry about debt carried on one’s back. Or they can always sacrifice that freedom and instead go to one’s dream school, or a school with a better name, and hope that in the long run, it will prove worth it. 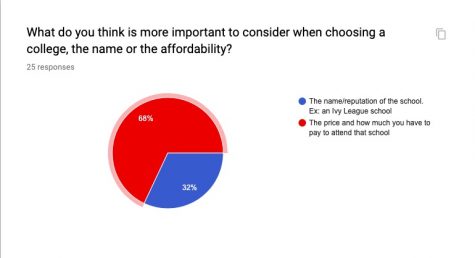