One man’s cult is another man’s religion 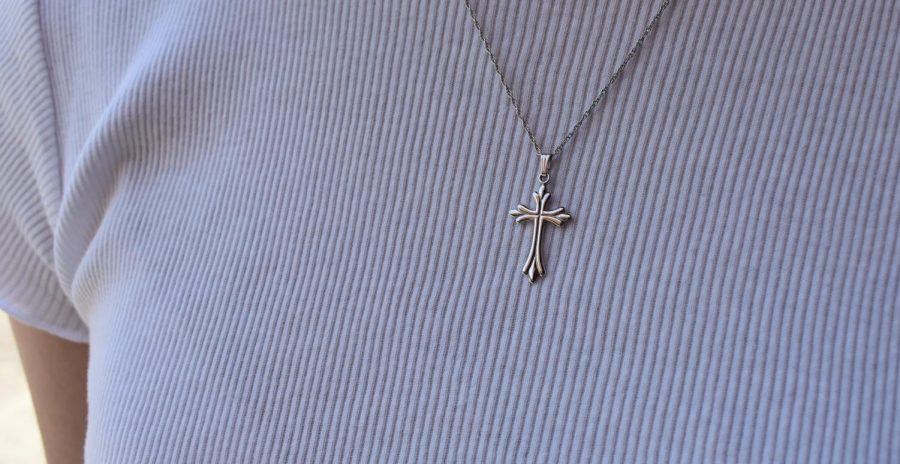 Religious followers often express their connection to their faith through jewelry. It allows for easy identification of one’s religion and can act as a conversation starter. Shared faith between people can create a bond or generate comfortability. “My religion isn’t just something I do once a week, it’s my lifestyle. It has such an influence on a lot of the things I do today and every day, [from] how I deal with stress to making in the moment decisions,” junior Priscilla Peterson said.

A mix of curiosity and fear of the unknown gave rise to religion. Historically, if something could not be explained, God assumed responsibility, some higher power pulling the strings for the population on Earth. From the beginning of humankind, individuals always sought an explanation for the purpose of life and their place in the world. A culture that did not practice some form of religion does not exist in records of human history. Death, the consistently significant aspect of the unexplained that religion attempts to illuminate, remains an inexplicable phenomenon. The concept endures as a point of major debate across all religions. Christianity and Islam suggest an existence of both heaven and hell, and followers of Judaism hold a wide variety of views on the afterlife and do not believe in one. Buddhists and Hindus believe in reincarnation, and other philosophies such as Confucianism and Taoism do not entertain the notion at all. Religion seeks to answer unanswerable questions and to explain that which seems unexplainable. However, much remains and will remain unknown, well out of the realm of human understanding, and for followers, the answers must be left up to faith.

Historians currently regard ancient civilizations’ religions as ‘mythology’ and depict it as a time of rituals and supernatural entities responsible for the creation and maintenance of the world and the known universe. The entities would often mirror the values of the culture. In ancient times, religions—excluding Judaism—would consist of multiple gods, due to the fact that each one would be attributed to a certain aspect of human life or earth. For example, the Egyptians praised over 2,000 deities, most famously Ra, the sun god, and others like Isis, the mother goddess. The logic of worshipping an abundance of gods stemmed from the collective understanding that no one person could possibly satisfy all one’s needs, and society recommended interaction with a variety of people to achieve wholeness. As there exists no historical evidence that definitively proves whether polytheism or monotheism came first, people largely assume that monotheism came later because of the gradual appearance of the three major religions, Judaism, Christianity, and Islam. Christianity now exists predominantly far and wide across the globe in both North and South America, Canada, Southern Africa, Russia, and most of Europe. Judaism remained predominant in Israel and later established itself in other countries like the United States, and Islam exists predominantly across the Middle East and in Indonesia and Malaysia. The religions contain plenty of commonalities, including and not limited to monotheism, Semitic origins, a belief in good and evil, the sacredness of the Book of Genesis, and belief in creation.

So how does religion touch individuals and in what ways? Common responses include happiness, morality, and family life. Religion acts as a force, it creates cultures and weaves through them, existing in the majority of societies today.  Religious followers commonly believe that religion strengthens positive aspects of character and life.

“I personally enjoy the aspects of Judaism more around the teachings of kavod (respect) and tikkun olam (social action “repair of the world”). What I like about Reform Judaism specifically is that there is no set way to view G-d. Jews also do not spell out G-d which I think is a very interesting aspect and a huge form of respect. The Jewish religion views G-d as a personal relationship, and at least with Reform Judaism, there is no right or wrong way to go about this relationship. My synagogue personally also does not look down on those who don’t believe in G-d, which I think shows how accepting of a faith it is,” Magnet junior Jordan Ross said.

A Pew Research Center study finds that nearly half of highly religious Americans see and spend time with their extended family at least once or twice a month compared to only three-in-ten less religious Americans who gather with extended family moderately to much less frequently. 65 percent of highly religious people say they donated their time, products, or money to aid the poor and less fortunate whereas only 41 percent of less religious individuals said the same. A surprising 40 percent of highly religious adults find themselves “very happy” people, compared to 29 percent for those who find themselves less devoted. An additional study done by the Pew Research Center, called Pew Research Center’s U.S. Religious Landscape Study, delves into how Christians define their Christian identity. 86 percent of the roughly 35,000 adult participants state that belief in God defines the most important aspect of their faith. Gratefulness, forgiveness, and honesty follow suit as essential components of the Christian identity. The belief that certain traits and acts hold importance to their faith leads religious followers to actually participate in them.

“I believe without my religion I wouldn’t be as forgiving or loving during hard times like times where I do people wrong or people do me wrong. I would hold grudges and bitterness. I don’t really think about that as often because I’m proud of who I am with my religion now,” junior Priscilla Peterson said.

These studies leave room for several inquiries. As it only covered Christians, there exists no guarantee that the same logic extends to other religion and philosophies. However, in theory, it could possibly extend to Islam and Judaism due to the striking similarities between the three religions. The evidence that religion affects one in such a way that they live differently than those who do not practice or do so only infrequently begs more questions regarding the extent that religion affects lifestyle, behavior, and personality.

“I can’t speak for every religion, however, I believe for people who claim to be followers of Jesus, there should be an undeniable love for our Lord and love for the world around us. We do this because we realize we are sinners who are saved by grace and a sacrifice made on our behalf,” NorthStar High School Pastor Casey Linch said.

Moral behavior often depends on how one views God’s temperament. In an empirical paper written by Shariff and Ara Norenzayan of the University of British Columbia in 2011, the authors attempted to establish a relevant behavioral divergence between the belief in a benevolent God as compared to a malevolent God. Two studies on the likelihood to cheat done on 40 to 60 undergraduate students showed that those who viewed God as punishing and less loving as less likely to cheat. These results became enforced by further analysis of data spanning 67 countries regarding religious beliefs that concluded results consistent to the last. It found that crime rates and criminal activities in communities that believed in a malevolent God maintained lower than in societies that believed otherwise. It seems here that ‘good’ behavior emerges out of fear for repercussions.

“I think God is benevolent. I don’t see a benevolent or malevolent God as being better. I do think people’s perception of their God changes their faith on how they view or treat religion based on their personal beliefs and what the religious beliefs are based upon,” Muslim Magnet sophomore, Rashida Jalloh said.

Not uncommonly, religious followers defend hateful or unaccepting beliefs with their belief. This trend can become extreme and lead to extremist religious groups, like ISIS, a well known extremist group.

“You cannot do bad and say bad and blame it on a writing that’s thousands of years old. You have to adapt to the modern world and realize the beliefs of religion can sometimes be outdated,” Ross said.

Religion can play a large role in communities, especially religions involved in the inner workings of the community. Christianity, the prevalent religion for Cobb County, is worshipped in one form or another in hundreds of churches all across the county, inviting all types of people from all denominations.

“Religion and the community around it can be power[ed] through the church people enjoying giving, helping, and connecting. We grow from one another and learn from each other’s mistakes,” Peterson said.

“For what we believe at NorthStar, we pray it [religion] is a positive impact. We are called to love our neighbors as we love ourselves, therefore we should be extending a helping hand in support and love to the people around us,” Linch said.

Religion touches the community in seen and unseen ways. Simply irrelevant to some and crucial to others, the cultural significance and impact of religion remain undeniable, especially here in the South. Whether one practices or not, believes or not, locals collectively hope to move religion every day in a more peaceful, helpful, and welcoming direction for all who reside here.