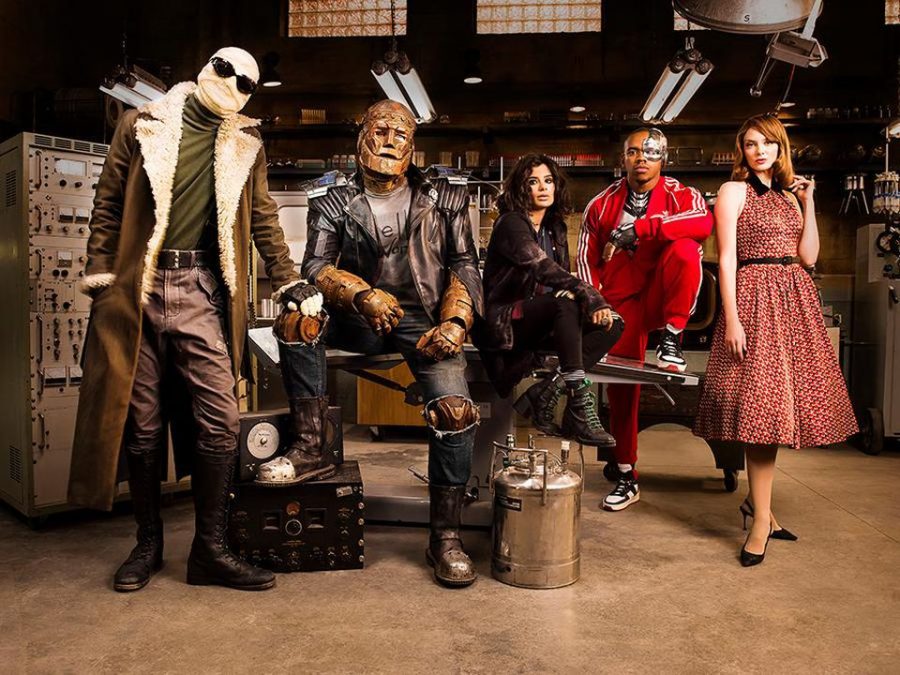 The characters of Doom Patrol (left to right: Negative Man, Robotman, Crazy Jane, Cyborg, and Elasti-Girl ) appear in a promotional photo for the show. The Doom Patrol first appeared in 1963’s My Greatest Adventure #80. Initially conceived as the “World’s Strangest Heroes”, the team comprised of outcasts not unlike Marvel’s X-Men; the team reached their peak popularity when writer Grant Morrison (New X-Men, Batman, JLA) wrote for the team in 1989.

The idea of organized generations in the Western world (particularly in the United States) should sound familiar, initially coined by Getrude Stein and popularized by Ernest Hemingway in 1926’s The Sun Also Rises. To the unaware, this lineage starts with the Lost Generation (born 1883-1900), the Greatest Generation (born 1910-1924), the Baby Boomers (born 1946-1964), Gen X (born 1965-1979), and Millennials (born 1981-1996). Though these groups differ in various ways (relationships with technology, political values, economic status), the generations do possess some commonalities.

The generation after Millennials serve as an outlier of sorts. To start, this generation (known as Gen Z, born 1995-2010) seems extremely individualistic and opposes the idea of generations, with one member claiming the “notion of cohesive generations is nonsense”. In addition, they are far more world-weary and jaded than prior generations, due in large part to experiencing what they see as a “rigged system”, impacting their lives and countless others. Most importantly, this group finds themselves the most aware and accepting of mental health, sexuality, and social issues.

With such a complex group of people, representing Gen Z in the media seems like a daunting task, a true statement: studies reveal the indifference this generation shows towards the offerings of cable TV, caring more for platforms like YouTube and Netflix. Shows like Bojack Horseman, Sex Education, and Euphoria often come up when discussing which best captures issues of mental health, sexuality, and loneliness, respectively. None of these issues can easily find themselves represented accurately, mostly because they exist in an abstract and fluctuating form for every person, but also because of how the youth specifically experience these topics. All three of the previously mentioned shows do an admirable job at representing one specific issue, but suffer for the same reason.

Viewers wanting these themes and more in one show, look no further than DC Universe’s Doom Patrol. Based on the Detective Comics (DC) comic series of the same name, the show depicts the team of the same name and their adventures. Heavily inspired by the writings of Grant Morrison, the show received acclaims for its storytelling, compelling characters, and revitalization of superhero television. Despite all that, the greatest strength of the show relates to how it portrays the intricacies of Gen Z life.

Diversity and Gen Z often find themselves linked, regarding both demographics and media: in the former case, people of color comprise nearly 50% of the population. Regarding the latter, a score of authors (mainly adults) argue in favor of the virtues of diversity in media for youth, specifically as figures of empowerment and role models. Doom Patrol excels at this, as the show and its cast encourage viewers to relate with its diverse cast of characters, like Latina actress and activist for immigration reform Diane Guerrero, who plays Crazy Jane, or black actor Jovian Wade, who plays Cyborg.

Well-rounded characters form the basis of any work of fiction, something the show does well by including characters with Gen Z experiences. One such trend, parental relationships, finds itself best represented by Cyborg’s (real name Victor Stone) relationship with his father, Silas. Episode 2, titled “Donkey Patrol”, focuses on their relationship: Victor wants to stop minor crimes while Silas wants him to “do better” & focus on grander threats. A flashback scene in “Donkey Patrol” shows this well, demonstrating the cold professionalism he exhibits towards Victor. Despite what it seems like at the offset, Silas does not act this way out of spite, but rather from a source of fatherly love, wanting his son to join the Justice League and become a great hero. Situations like these resonate with young viewers pressured to succeed by their parents, as studies show that the presence of helicopter parents, like Silas, result in traits like “reduced self-efficacy…and alienation from peers”, which definitely apply to Cyborg.

The #MeToo movement already left a major impact on the world and the culture of sexual assault, with powerful men like Kevin Spacey, Larry Nassar and even the president facing accusals relating to sexual misconduct; and with Gen Z growing up with the movement, this generation can handle seeing the realities of sexual assualt depicted in media. Doom Patrol highlights this with Crazy Jane: at a young age, Jane (real name Kay Challis) faced sexual abuse at the hands of her unnamed father.

Aside from the normal trauma this would cause, the experience also caused her mind to split into over 60 distinct personalities; this mental dissociation serves as a common coping mechanism in sexual assault victims, but amped to a superhuman degree in the show. More importantly, several of Kay’s personalities exhibit personality traits or powers that one could link to a sexual assault survivor: the super-strength and aggresiveness of Hammerhead as a defense against potential assault, the cyclical depression of the Hangman’s Daughter, and Scarlet Harlot, who struggles to control her sexual urges. This also ties into mental health and how it relates to Gen Z, as over 40% reported feeling stressed every day of the week.

A large portion of the praise the show earned relates to its portrayal of LGBT themes and characters, chief among them Negative Man & Maura Lee Kaupt.  The former, portrayed by openly gay LGBT activist Matt Bomer, depicts a complex look at the life of gay men. In the show, Negative Man (real name Larry Trainor) served as a test pilot in 1960s America: on the outset, he lived and breathed the American Dream, down to the nuclear family. Secretly, he engaged in an affair with colleague John Bowers. Though too young to remember “don’t ask, don’t tell” (the military policy relating to LGBT service members introduced in 1993), Gen Z members can look up to various LGBT role models in the armed forces today, so showing the youth a time where a figure came off as an undesirable soldier and  cultural anomaly helps contextualize how far the country came in the decades since. The show also exceeds in genderqueer representation. Defined as “someone who feels their gender doesn’t fit…socially constructed norms”, a large number of teens can identify as genderqueer, with 70% of Gen Z supporting gender neutral bathrooms. Gender identity plays a key role in episode 8,“Danny Patrol”, which marks the debut of Danny the Street and Maura. While the plot features Trainor and Cyborg combating the Bureau of Normalcy, Maura steals the show.

A former Bureau member, Marau came out as trans after befriending Danny; this marks a major milestone for media depiction of trans women of color, who sorely lack representation outside of FX’s Pose. Viewers see her grow from a woman scared to embrace her identity into becoming fully accepting herself, confronting those who misgender Danny; so devoted to his cause of providing a safe haven for LGBT communities, she even offers to pose as a man to save him. The theme of social outcasts coming together in times of adversity can speak to LGBT folk.

Doom Patrol, in various ways, defines the Gen Z experience: abstract, tied into the current social climate, and even bleak at times. Most of all, the show and its characters prove that even in the most dire of situations, the youth of the time can still overcome their issues: though Larry never got to live with John, episode 11, “Frances Patrol” sees him reunite with an aged John and gain closure. In addition, while the villainous Mr. Nobody mind-controls Cyborg into nearly killing his father Silas, the show ends with him understanding learning to accept the Doom Patrol, flaws and all, as a family; and that more than anything defines Gen Z.