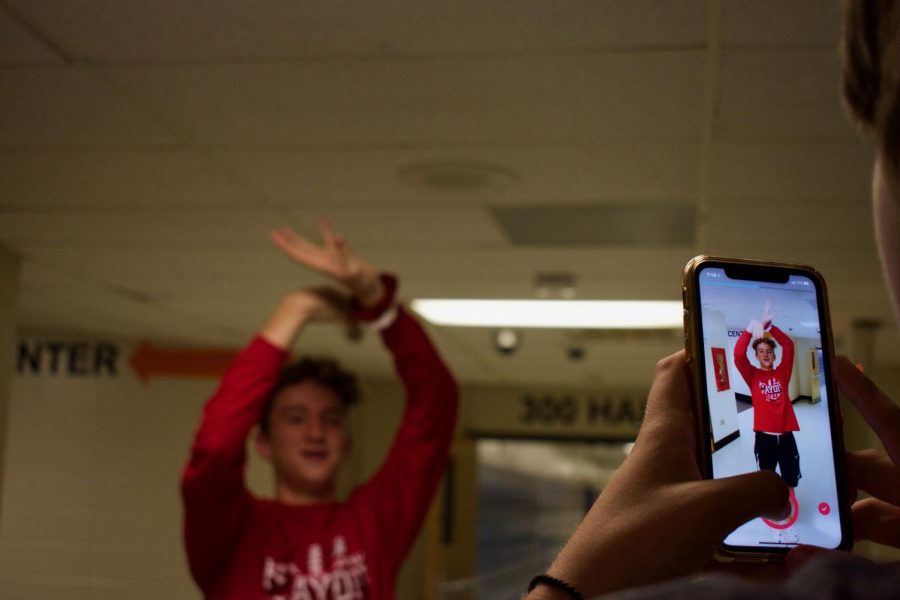 TikTokers including sophomore Bentley Huff (pictured) spent their summer trying to become “TikTok Famous”. With school back in full swing, TikTokers have begun filming TikToks at school instead of at home or while on vacation as they did over the summer. TikTok will experience a bright future with the holiday season approaching, and ultimately, TikTokers’ obsession over the social networking database.

From hitting the woah to lip-syncing Old Town Road, American teens danced their way through the summer of 2019, obsessing over social media’s newest addiction: Tik Tok. While originally introduced in September of 2016, when it comes to popularity, TikTok reached its zenith over the summer. Teenagers strived to become “TikTok famous” and kept up with the platform’s latest trends. Users of the app spent countless hours rehearsing, choreographing, and uploading videos of “TikTok” dance trends and challenges including but not limited to, hitting the woah, the buckle, and the figure-eight hand spin to the song Obsessed by Mariah Carey.

In 2014, Chinese entrepreneurs, Alex Zhu and Luyu Yang, broke the Internet with Musical.ly, an app that would change the premise of the twenty-first century’s apps.  In 2016, ByteDance bought out the corporation and Musically, essentially, became TikTok. With Musers becoming TikTokers, the platform gained three hundred million new fans. TikTok allows ordinary people all over the world to express their hidden talents, favorite songs or dances, and their unique personalities through 15-60 second videos. These videos display TikTokers lip-syncing and performing dance routines to popular songs, comedy skits, referred to on TikTok as “sounds”. TikTokers also have the option to create and share their own unique “sounds”.

TikTok allows users to view the most popular TikTokers and TikTok trends on a feature called the “For You Page”.  As TikTok trends emerged, the content featured on the “For You Page” rapidly changed and evolved. TikTokers posted videos of unique dances to popular songs trending on the app including but not limited to; “Truth Hurts” by Lizzo, “Hey Julie” by KYLE featuring Lil Yachty, and “Hit or Miss” by Jacob Sartorius. Makeup artists, cosplayers, and painters also made their way onto the “For You page” this summer. They used TikTok as an outlet to show the world their art and revealed the more artistic aspects of the app.

Summer’s TikTok frenzy did not only exist in America: 500 million people worldwide use TikTok every day. In June and July alone, TikTok gained twenty-one new users per second. While tech-savvy teenagers make up the majority of Tik Tok’s users, multiple celebrities began experimenting with the app. Musicians like Cardi B and Nick Jonas lead fellow celebrities as they navigated this summer’s hottest trend. Every day, everywhere, more and more people become TikTokers.

NC students jumped on the bandwagon over the summer and filmed TikToks of their own. Filming locations ranged from places as simple as the pool or beach to as complicated as a roof or even another country. Tori Young, a freshman at North Cobb, admitted to recording a TikTok underneath the Eiffel Tower while vacationing in Paris. However, not all of NC’s TikTokers took filming videos to that extreme. NC’s most famous TikToker senior, Andrew Martinez, did just that. Martinez managed to build a fanbase of forty-five thousand TikTok followers over the summer. Martinez’s classmate and good friend Cole Wright referred to Martinez as “The TikTok Guy.” NC’s “TikTok guy” revealed the simplistic style of TikTok by recording a video clip in his bathtub with pizza. As his content became wildly popular, Andrew started to make money. He made $200 by simply posting videos on TikTok. Toward the beginning of his TikTok career, Andrew didn’t take the app seriously.

“I made Tik Toks at first as a joke, then they started getting popular,” Martinez said. What started as a joke for Andrew quickly turned into a summer job and source of revenue.

ByteDance’s $75 billion corporation acted as a main source of entertainment for NC’s high schoolers over the summer, along with teenagers all over the world. As school returns to session, TikToks in classrooms, locker rooms, and cafeterias across several nations increasingly pop up on TikTok’s “For You Page”, replacing those filmed at pools and beaches. Halloween, Thanksgiving, and Christmas are right around the corner, giving the app endless possibilities and creates ample material for users. Only time will tell if TikTokers will tire of this summer’s hottest trend and move onto the next.