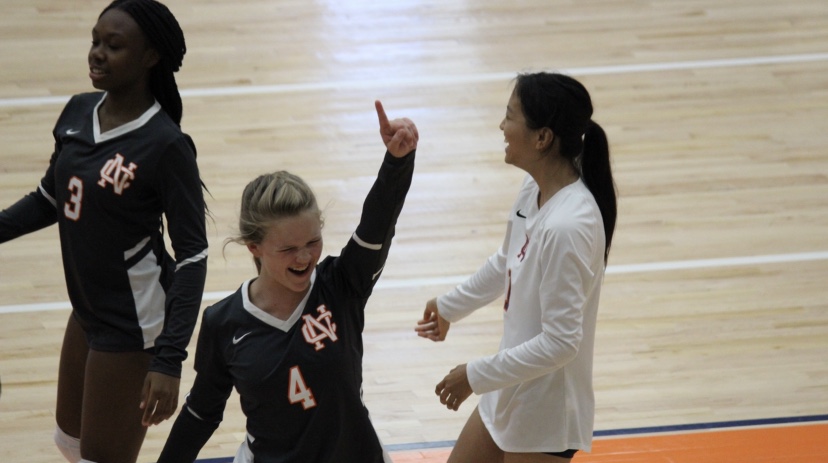 North Cobb’s Lady Warriors, Carson Walker, N’Jheri Mathew, and Serena Xu celebrate their victory of four wins and one loss at their tournament on Saturday. “It felt great to have won four games after a whole day of competing, because we were all exhausted from playing,” teammate Harmoney Harvey-Morris said.

North Cobb’s JV Lady Warrior volleyball team kicked off their season over the weekend by hosting the JV Warrior Classic, their first official tournament. Walking into the tournament with a record of three wins and one loss, the team eagerly awaited to see what the day held. The Lady Warriors played five, two set games on Saturday and won four out of the five games. They left the tournament with a season record of seven wins and two losses.

In the first game of the day, NC defeated the Hillgrove Hawks in a two-set match held in the main gym. With a new sense of confidence, the Warriors went into their next game where they defeated North Paulding’s Wolf Pack in a nerve-racking two-set match. The first set of the game got off to a rocky start as North Paulding’s best server aced the warriors three times in a row. Down 17-23 towards the end of the first set, the girls refused to give up. With freshman Gabrielle Head up to serve, the team fought up until the last point. Due to the consistency of Head’s serves, NC’s JV volleyball team won the first set 25-23. Emerging victorious by only three points, the second game concluded with a final score of 25-22. The Lady Warriors’ perseverance led to them to the top as they also won their second game of the day after a close match.

The highlight of the day came during the third game of the tournament when Warriors faced off against the McEachern’s Indians. The Lady Warriors won by a landslide in two quick sets. After winning the first set 25-21, the girls decided that they hadn’t played their best. Head coach Dennis Desainctis challenged his team to only allow their opponents to score 15 points. The Lady Warriors accepted and exceeded this challenge, winning the second set 25-5. Defensive Specialist N’Jheri Mathew helped her team accomplish this goal by keeping her coaches goal in mind as she started to serve. She served 18 times in a row, acing the Indians throughout the majority of the set. Putting her nerves aside, N’Jheri took a deep breath and served her ball, the eighteenth time in a row. This serve ended up winning the game.

“I was nervous during the first three points and the last point, I felt like if I messed up it was going to be all my fault,” Matthew said.

Unfortunately, the Lady Warriors suffered defeat at the hands of the Woodstock Wolverines during their fourth game. They lost in two extremely close sets due to simple mistakes such as missed serves, as well as lack of communication. However, the girls did not let one game or loss define their attitude going into their fifth and final game against the Wheeler Wildcats. This marked the fifth JV Volleyball Warrior vs Wildcat game of the year. North Cobb won three out of the four previous matches. Determined to make it a fourth, NC’s lady warriors played their hardest and ended up on top. After an intense two set game against the Wheeler Wildcats, North Cobb took the victory by playing strategically and using their opponent’s weaknesses against them.

NC’s JV Lady Warrior volleyball team wore their jerseys proudly on Saturday as they went home with four wins and one loss from the day’s tournament The girls look forward to the next tournament on home ground and plan to battle it out until the end once again.

“I wanted to walk into our own house and show the other teams how great we were. Yes, little mistakes were made, but we played our hearts out like I wanted,”  NC sophomore defensive specialist Harmony Harvey-Morris said.