YouTubers: controversial, entertaining, or both? 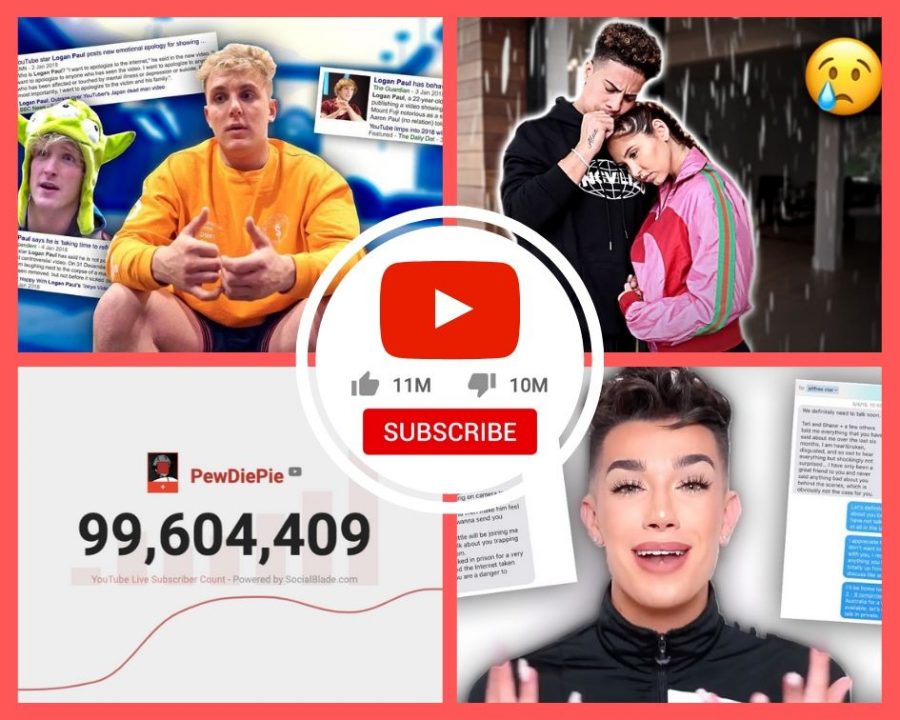 YouTube celebrities Jake Paul, PewdiePie, James Charles, and the ACE Family constantly create controversies with their videos and social media presence, yet, the controversies rarely deal a huge blow to the number of views they receive. Although controversial, their popularity helps them gain millions of dollars in profit.

If you guys liked this video, please give it a thumbs up. If you want to see more videos like this, hit that subscribe button and make sure to click that bell button on the side to turn on post notifications.

YouTube first launched in 2005 but did not become popular until 2006 when news stations started using the social platform’s videos on their websites. Google then bought the company for 1.65 billion dollars in November of 2006 which boosted views and increased popularity. Ever since then, the number of people creating YouTube videos for a living increased exponentially. Famous YouTubers with millions of subscribers, such as David Dobrik and MrBeast, became millionaires off their videos. Today, one can easily become a YouTube star but can also fall off the platform just as quickly. Even though a fair share of YouTubers may seem extremely controversial, they still manage to create content that draws millions to follow and watch.

Jake Paul: One of the most controversial YouTubers on the platform, Jake Paul managed to attract almost 20 million subscribers. Paul’s career first took off with his stint on Disney Channel’s Bizarrdvark, though his frequent inappropriate behavior resulted in his contract termination. Despite this, his time with the channel helped him gain a wide variety of audience members, with minors averaging at 13 years old forming the bulk of his subscribers. However, this did not stop him from creating content that depicts explicit moments, inappropriate language, and racist remarks. Even with all his controversial content, Paul still receives an average of 6 million views per video for his, often fake, stunts and pranks, making him a millionaire in the industry.

James Charles: 20-year-old James Charles started his YouTube channel in 2015 and rose to fame in 2016 when he became the first male ambassador for the makeup company, Cover Girl. Since then, Charles’ channel expanded through a trend of memes on his makeup looks, singing, and public persona on social media. Although the makeup guru lost nearly 3 million subscribers due to the Tati feud, he still holds a whopping almost 16 million subscribers. Over the years, Charles released several apology videos for making racist comments and being involved in sexual assault accusations. However, because of his connections with the most famous celebrities today, millions of viewers remain subscribed to Charles, giving him enough internet attention for him to reach a net worth of $12 million.

PewdiePie: A large portion of people who watch YouTube know where PewdiePie stands on current issues and what he does. His channel first began with gaming content, but as it gained more and more viewers, the Youtuber started creating an opinion-based popular news platform for his audience. He now boasts one of the biggest entertainment news outlets on YouTube, with almost 100 million subscribers. In spite of holding one of the highest subscriber counts on YouTube, even PewdiePie finds himself in controversies. He faced especially heavy criticism for using racial slurs and spewing sexist comments in several videos; pushed by the public to address his actions, he ended up uploading apology videos for his mistakes. He became so controversial that at one point YouTube even cut ties with PewdiePie, canceling his YouTube funded show “Scare PewdiePie.”

ACE Family: Though deeming themselves a family channel (and existing as one of YouTube’s most popular), the ACE Family frequently lands themselves in hot water. Austin McBroom and his wife, Catherine Paiz, first started their channel in 2016 and made prank videos. 17 million subscribers currently tune in almost every day to watch their lifestyles through daily vlogs. McBroom first faced accusations in 2018 for past tweets that viewers found extremely racist and sexist. Recently, McBroom came under fire for allegedly sexualizing a child. Unlike other YouTubers, McBroom never released any apology videos and refuses to apologize to the people he offended.

Even though these influencers constantly create controversies and drama, they still remain among the most popular YouTubers on the platform. The content they create continues to receive millions of views, allowing them to earn a gargantuan profit. On today’s social platforms, the more controversies an influencer experiences, the more interesting the content seems to viewers, subscribers, and followers. Therefore, YouTubers such as Jake Paul, PewdiePie, James Charles and the ACE Family maintains the controversial images that brought them their fame in the first place, regardless of how others may see it.