Swinging into the heart of the season with the Lady Warriors 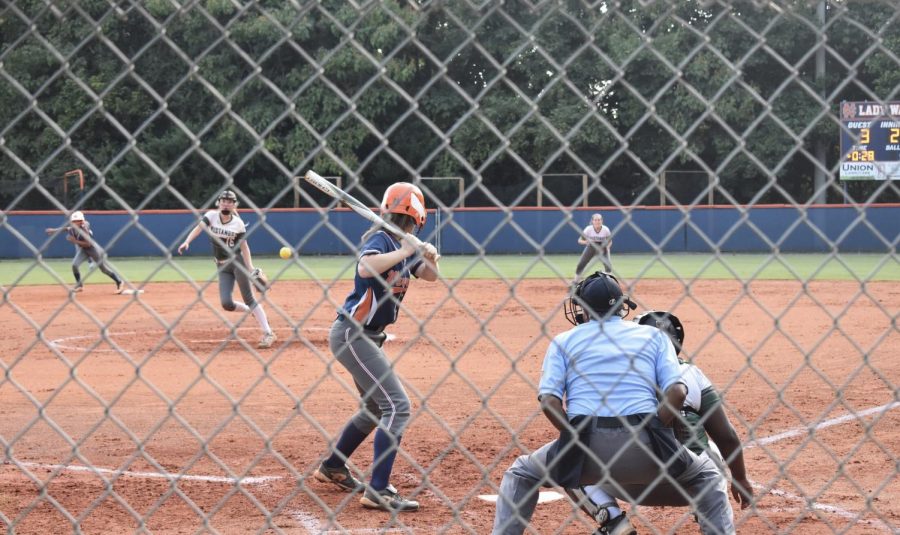 JV softball player, sophomore Abi Klinkert prepares to swing during the second inning. In their third game of the season, the JV Lady Warriors went up against the Kennesaw Mountain Mustangs.

The Lady Warrior junior varsity and varsity softball teams went up against Kennesaw Mountain High School on Tuesday, August 20, in a regional game. The team invited former players to return and watch the game for their annual Alumni Night. Kennesaw Mountain beat the varsity team 11-0, and the JV team 7-5.

The night began with the junior varsity, where the Mustangs batted in the top half of the first inning and gained a lead on the Warriors by one run. With support from their defense, NC pitchers sophomore Lindsay Croft and freshman Jasmine Alwan struck out the side during the second inning. Although the Mustangs held their 3-1 lead throughout the second inning, the Warriors’ offense pulled through and helped them score 2 points, bringing the score to 4-3.  In the last inning, Kennesaw Mountain swung three more runs, ending the game with a score of 7-5.

By the end of the first inning of the varsity game, Kennesaw Mountain scored three points, and, despite the Lady Warrior’s valiant efforts, continued to score until they swept the game, beating NC 11-0.

Before the varsity game began, NC softball head coach, JoBeth Weaver introduced the alumni and asked them to come out onto the field. The graduation years of the alumni ranged from as far back as 2004 to as recently as 2017. The returning players shook hands with each of the current varsity players and wished them luck on their game.

“A lot of the ladies that come back helped contribute to over 400 wins for North Cobb. Now they have professional careers and families, and they still come back because they love North Cobb softball.” Weaver said.

Examining the season as a whole, after playing their first three games this season, the JV Lady Warriors establish a record of one win and two losses. While the varsity team kicked off their season much earlier, with a preseason game against Norcross High School on August 1, their most recent game putting their record at two wins, six losses so far.

“The season is a toss-up— we’re 2-6. We play well and work hard, we just can’t find our rhythm, but once we do, the other teams better watch out,” member of the NC varsity softball team, senior Katherine Bywaters, said.