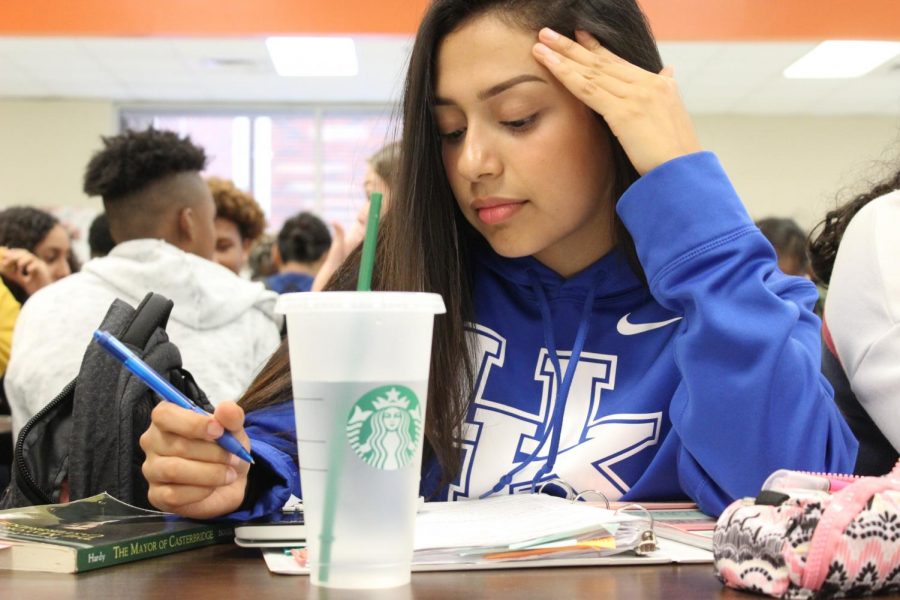 With senior year beginning, the workload of homework and studying has begun to kick in. Students depend on coffee, energy drinks, and protein bars to get them through the day. Can you imagine going a week without any caffeine? Magnet senior Janett Rodriguez did exactly that and explains what went down.

As a senior Magnet student, caffeine serves as a crucial part of my daily diet. I view it as a necessity for me to function properly, day and night. My dependency on caffeine (specifically an iced caramel macchiato with extra caramel drizzle and almond milk from Starbucks) remains an unhealthy addiction in my life. My daily schedule consists of studying, working, playing soccer, spending time with friends and family and most importantly, finding time for myself. I could not imagine performing my usual daily activities without caffeine. For coffee lovers, eliminating caffeine from our diets happens only in our nightmares, which explains why I put myself up for the challenge. I gave up caffeine for five days straight, so you do not need to.

Living a caffeine-free lifestyle for a week included giving up everything that contained caffeine in it. Yes, everything: no coffee, chocolate, soda, frozen treats or protein bars. I started off my Wednesday morning with a usual amount of energy (in all honesty, I made sure to fuel up the day before with an extra cup of coffee before going to bed). I grabbed an apple before I headed out to school and proceeded throughout my day. I did not notice any signs of sleepiness or lowered attention span while in class. I finished my homework on time without pulling an all-nighter and even managed to watch a couple of episodes of Criminal Minds before going to bed. This challenge seemed easier than expected, but only time would tell.

I found it rather difficult to wake up that morning, and I stared at my alarm clock for about five minutes before I decided to get myself up and ready. As I headed out, I grabbed my favorite Clif bar flavor, Peanut Toffee Buzz. As I sat in the parking lot waiting for the clock to hit 8:10 a.m., I realized that the Clif bar I picked up this morning contained caffeine. In fact, it contained 44 mg of caffeine, equivalent to the amount of caffeine in my usual Starbucks order. I proceeded throughout my morning with an empty belly until lunch came around, and let us just say that the school salad left me with a plate full of disappointment. Soccer practice later that night became the only type of motivation that pushed me through the day. During practice, my coach prepared us to run lap after lap. I thought practice would help, but as it ended, the only plan that came to mind included crashing into bed as soon as I got home.

I found myself pressing the “snooze” button on my alarm an extra three times. I questioned whether this correlated with the conditioning from soccer practice last night or the absence of caffeine in my body (probably both). I could only dream of sleeping in my classes since I could not afford missing out on instruction time for rigorous honors and Advanced Placement (AP) courses. After the school day ended, I headed home and got ready for the football game later that night. I knew the right decision included staying home and catching up on sleep, but I still decided that going to the game would bring back the energy that I lacked, despite the SAT scheduled the following morning.

I usually sleep-in during the weekends, but since the SAT took place this morning, my alarm woke me up at 7 a.m. As I finished getting ready, I headed to school and passed by Dunkin’ Donuts. Refraining from the temptation, I proceeded to head towards school avoiding the tempting sign from the corner of my eyes. To my surprise, I finished the exam without falling asleep, feeling confident with how I did. Ending the day, I questioned myself, “Maybe I am not the caffeine addict that I thought I turned into?”.

As the week came to an end, I realized that I could actually survive a while without caffeine. The challenge seemed impossible at first, but towards the end, I found myself feeling less anxious and jittery. Caffeine had taken massive control of my diet for the past three years of high school. It helped me finish projects the day before a deadline, pushed me through final exam weeks, and most importantly, aided my survival through a seven-hour shift without wanting to nap in the break room.

I realized that my relationship with caffeine appeared less toxic than I imagined. Caffeine turned into an incentive rather than a necessity to my usual diet. The motivation that caffeine brings to my body must equal the same motivation I need to find myself without it. Will I continue to stop consuming caffeine? Probably not. In fact, an iced coffee sounds like the perfect treat after such an exhausting week.