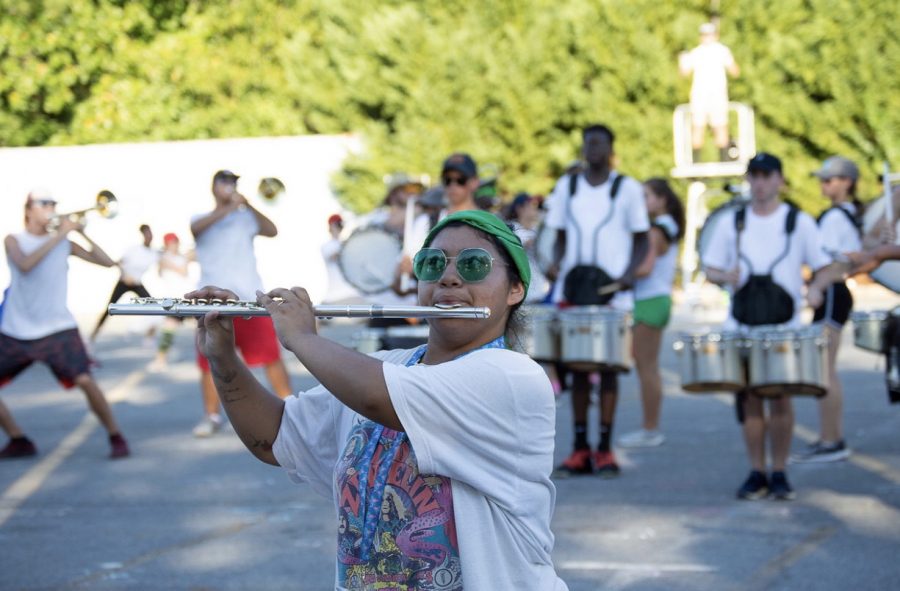 As graduating senior Briana Rohlfs enjoys her last season as a flutist in NC’s marching band, she reflects on what it takes to pull off a successful performance. “There’s a lot of emphasis on being a part of a team because if you’re not there it ruins the whole form. Everyone depends on each other to make the show happen. Without one person the show would be completely different,” Rohlfs said.

A longstanding staple in American culture, marching bands entertain crowds at sporting events with carefully choreographed movements and a unified sound. Participating in a marching band requires tenacity, dedication, and focus—all of which NC senior and marching band veteran, Briana Rohlfs managed to master over the last three years.

Rohlfs began playing the flute in the Barber Middle School band in the sixth grade. As the daughter of a flutist, Rohlfs knew she wanted to play the flute long before she stepped into the band room to audition.

“I wanted to play the flute because my mom played the flute. I walked in [to the auditions] and literally ignored every other instrument and went over to the flute. I tried my hardest just to make a little sound, and once I did, they said I could play it,” Rohlfs said.

After three years of the middle school band, Rohlfs decided to stick with the flute and continue playing it in NC’s marching band. When she shadowed an NC marching band member at Eighth Grade Night, Rohlfs caught her first glimpse of the hard work that the marching band requires.  According to Rohlfs, incoming freshmen should not take joining marching band lightly.

“Know what you’re getting into. A lot of people go into it thinking it’s going to be all laughs and giggles, and then once they realize it’s hard work, they quit,” Rohlfs said.

To onlookers, the marching band seems magnificent, and the band members may even make it look easy, but learning how to physically and musically coordinate with hundreds of people does not come without its challenges.

“There’s no room for slacking off. You need to pull your own weight, for the sake of everyone else. If you’re not pulling your weight it brings down the quality of the performance, it’s not the same [amount of] emotion going into it,” Rohlfs said.

Fortunately, during those countless hours of rehearsal, Rohlfs and her bandmates watch each other evolve and cultivate close relationships with each other.  One of those bandmates, senior and fellow flutist, Miku Fawcett, who has played alongside Rohlfs since middle school, agrees that all the time they spend together— summer practices, football games, competitions—allows them to get to know each other better.

“Since freshman year [Briana] has become more social with others. She talks to more people and makes more jokes now. After all the time you spend with a group of people, you form a strong bond with them, contributing to teamwork. I know that the bond I share with the other flutes is strong and I love them all. I know if I ever need anything I can count on them and they can always count on me,” Fawcett said.

Rohlfs describes Sheldon Frazier, Director of Bands at NC, as a life coach–providing students with advice and principles that come in handy inside and outside of the band room.

“I do that because someone did that to me at one time. When I was growing up, people would pass along information that they’ve learned, and that’s the reason I am where I am today, so I take any chance that I can get to pass that along,” Frazier said.

After long hours of practicing or working as a barista at Starbucks, Rholfs enjoys reading, spending time with her friends and her cat, Luna,  as well as shopping for rare pairs of Converse to add to her burgeoning collection. Rohlfs also participates in advanced women’s chorus at NC. Even though she does not plan on participating in the marching band in college, Rohlfs promises her flute will not collect dust in a corner while she works toward her degree in creative writing. She wants to keep practicing and learn more minor scales.

Although the many scales and movements Rohlfs learned to play over the past three years may leave her memory, the values and life lessons that marching band taught her will always stay fresh in her mind.

“[Band] is simply a vehicle to teach [students] how to be successful in whatever they’re passionate about. Some of them will go on to be musicians, some will go on to be educators, and that’s terrific, but whatever they choose to be, I ask that they be a good one… because the world needs people who are passionate about what they have a gift for to continue to build it and work towards making it, themselves, and this entire world a better place for all of us,” Frazier said.