The Evolution of The Tonight Show 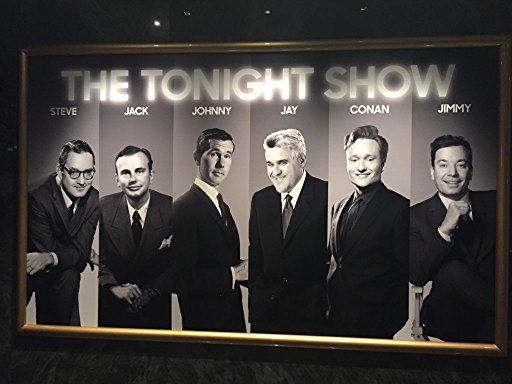 The Evolution of The Tonight Show

Late-night television, specifically The Tonight Show, serves as a staple for comedians, writers, actors, and singers to commemorate their successes, speak on issues they care about and update in their daily lives. Looking at the comedic aspect of the show, it established the concept of monologues, skits, and political banter, throughout its constant evolution. So if you aren’t watching The Tonight Show, you lack an American staple, a comedic perspective.

Emily Yahr, writer at The Washington Post states that the first late-night television show in history, Tonight Starring Steve Allen, started airing in September of 1954. Steve Allen, co-creator and host of the show, introduced the audience to Man on the Street Interviews, which involves interviewing strangers on the street with one broad question.

After two and a half successful seasons, Steve Allen made his departure from the late-night scene in 1957.

Tonight starring Jack Paar aired from July 29,1957, to March 30, 1962. Richard Bernstein, a writer at The Washington Post states,  he brought a fresh comedic perspective, with skilled improvising skills and interviewing techniques. Multitalented guests such as popular 1940s singer Kate Smith and President John F. Kennedy filled the stage, bringing the audience laughter and joy. Paar also started the tradition of taping live shows and airing them for later broadcast. Paar resigned in 1962, at the pinnacle of his Tonight Show career.

Johnny Carson quickly became a candidate for the new hosting position. His success with ABC’s “Who Do You Trust?”  eventually led NBC to promote him as host of The Tonight Show starring Johnny Carson which ran from October 1, 1962, to May 22, 1992.  He established comedic late night monologues, bringing forth banter, jokes, puns, popularizing The Tonight Show as a whole. He interviewed guests of all cultures, positions, races, and personalities; breaking the well-established racism barrier that dominated American culture at the time. Rising stars at the time like comedian Ellen Degeneres, who showcased her comedy for the first time on Carson and Robin Willams- who became a regular during Carson’s run, performed and debuted their finest work on Carson.

“Carson had a style that was very comedic. Where he liked to bring talent to the tonight show and introduced us to a lot of comedians and actors of the day in a humorous way,” NC Honors World History and Ethnic Studies Teacher Mr. Trepanier said.

When Carson famously announced his retirement, audiences expressed concern that the continuity and quality would be lost, and in choosing successful comedian Jay Leno, over fellow comedian David Letterman on May 25, 1992, The Tonight Show Starring Jay Leno made its debut brewing controversy with shocked and divided viewers.

Although viewers, initially upset and angry about NBC’s decision, later came to appreciate and enjoy Leno’s presence. One year after the news that Letterman did not receive the offer, Late Night with David Letterman debuted on CBS, lasting an impressive 33 seasons.  Despite the controversy, Leno gained popularity with a laid-back, richly infused comedy and general humor that made him unique, generating a successful show.

“When Jay leno takes over from Johnny Carson…He takes a very different approach. It was the same type of idea, of bringing in talent and interviewing people,” Trepanier said.

Again, the changing of the guard saw viewers being asked to embrace Conan O’Brien who lasted only a year before producers adopted the current host, comedian and Saturday Night Live alum, Jimmy Fallon. Fallon has filled the position with a twist on Carson’s approach bringing a plethora of comedic jokes, always trying to make the audience laugh. His popular segment, Thank You Notes, showcases his talent and witty banter with sidekick Steve Higgins, while playfully making fun of James Poyser, band member of The Roots.

“I always like how he does Thank You Notes during some of his episodes. He is always bringing out the best in talking about the different celebrities, getting to know them and their personality,” Sophomore Ellie Boyle said.

Through every era and principal host,  The Tonight Show provides viewers with fresh and varied perspectives. Its constant evolution allows the new hosts to provide the show with fresh, relatable comedy in today’s sometimes cold, violent society. So for future hosts of  The Tonight Show, the ultimate task continues— bring on the laughter.