Atlanta sees the arrival of King Gizzard & The Lizard Wizard 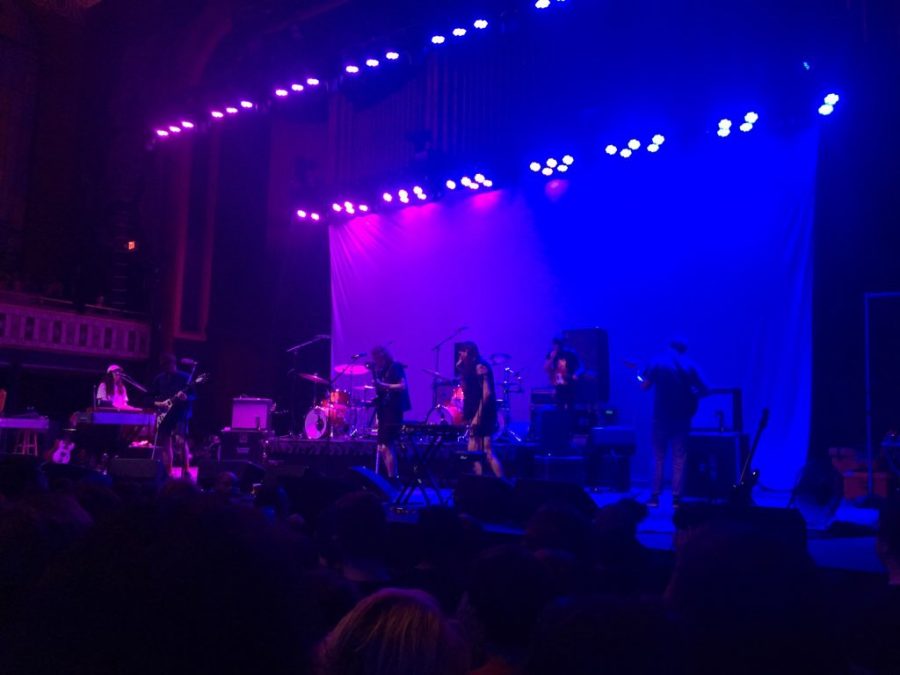 King Gizzard and the Lizard Wizard setting up for their set at the Tabernacle. Stu McKenzie checks guitars and Ambrose Kenny Smith checks microphones.

Concert goers witnessed mosh pits, psychedelic visuals, and electric performances at the Tabernacle on September 2. King Gizzard & The Lizard Wizard stopped by Atlanta during their tour following the release of their latest album, Infest the Rat’s Nest. The line for the show circled all the way around the concert hall as fans waited with high expectations to see their favorite band perform live.

The concert began with two sets performed by opening bands ORB and Stonefield. ORB displayed their acid rock sound to a crowd of unimpressed and impatient fans counting down the seconds until the arrival of the main act. Their show exhibited lackluster visuals as well as a sound system that managed to render the lead singer’s voice completely unintelligible.

The second band, Stonefield, provided concert-goers with an impressive display of brightly colored lasers, and a higher quality sound system to boot. The crowd’s energy started to rise as the all-female band continued to play heavy psychedelic tunes that came accompanied by the drummer’s impressive vocal range. Their set lasted forty minutes, and as time went on the crowd began to pick up steam. Audience members began to headbang to the hardcore rhythms, and the passionate applause at the end of their set showed their exhilaration at the impending appearance of the main performers.

King Gizzard & The Lizard Wizard started their set with “Mars For The Rich”, an intense track from Infest The Rat’s Nest that encouraged fan’s rampant dancing in the crowd. Immediately, the ground floor became a mosh pit filled with shoving, dancing and headbanging. The powerful drumming from Michael Cavanagh and Eric More empowered the audience, as well as Stu McKenzie’s powerful performance on vocals. The abrasive approach he took for the lyrics only enhanced the band’s attempt at taking a heavier approach to their music.

Following “Mars For The Rich” came “Robot Stop”, a fan favorite from their 2016 album Nonagon Infinity. As one of the harder tracks from the band’s discography prior to Infest The Rat’s Nest, it managed to keep the same intensity as “Mars for the Rich”. The crowd shouted the chorus of the song along with McKenzie, who encouraged the violence the crowd took on by headbanging and parading around the stage from instrument to instrument.

Moving on to the next song, “Big F.I.G. Wasp”, the band managed to transition without a hitch due to Nonagon Infinity’s seamless nature. Maintaining high energy, but metal influencing it considerably less, this song saw concert-goers retiring from the mosh pits. Despite this, plenty of fans still danced and moved along to the beat. It did not take long until the ferocity returned with “Gamma Knife”, another fast-paced song from Nonagon Infinity.

“Gamma Knife” saw the return of the crowd singing along with the band, as well as the frantic pushing and shoving in the mosh pit. This song served as the last of Nonagon Infinity’s heavy psychedelic tracks before “Alter Me I” and “Altered Beast II” from Murder Of The Universe.

They could not keep the same intensity of those before it due to the slower nature of the songs, but this did not detract from the experience, as it gave fans of Murder Of The Universe a taste of that album’s distinct sound. The passion remained present within the crowd and would carry throughout the band’s funkier, more electronic inspired tracks.

Songs like the notorious “Rattlesnake” and apocalyptic “Doom City”, as well as the funky, psychedelic “Nuclear Fusion”, gave fans of Flying Microtonal Banana a chance to sing along to their favorite songs on the album. Albums Sketches of Brunswick East, Gumboot Soup, Fishing For fishies, and Polygondwanaland also featured during their set.

At the end of their performance, they returned to the 70s metal-inspired sound of Infest The Rat’s Nest with “Self Immolate” and “Planet B”. Audience members returned to the mosh pit, but countless refrained due to the apparent exhaustion from the concert that required so much energy.

The concert provided a night to remember for the band’s fans, a large portion of which left exhausted, covered in beer, and with ringing ears. King Gizzard & The Lizard Wizard plan to perform at 16 more venues for their tour around the U.S. and Europe. Future concert-goers can expect an astounding performance and to leave with their heavy-rock concert desires satisfied.