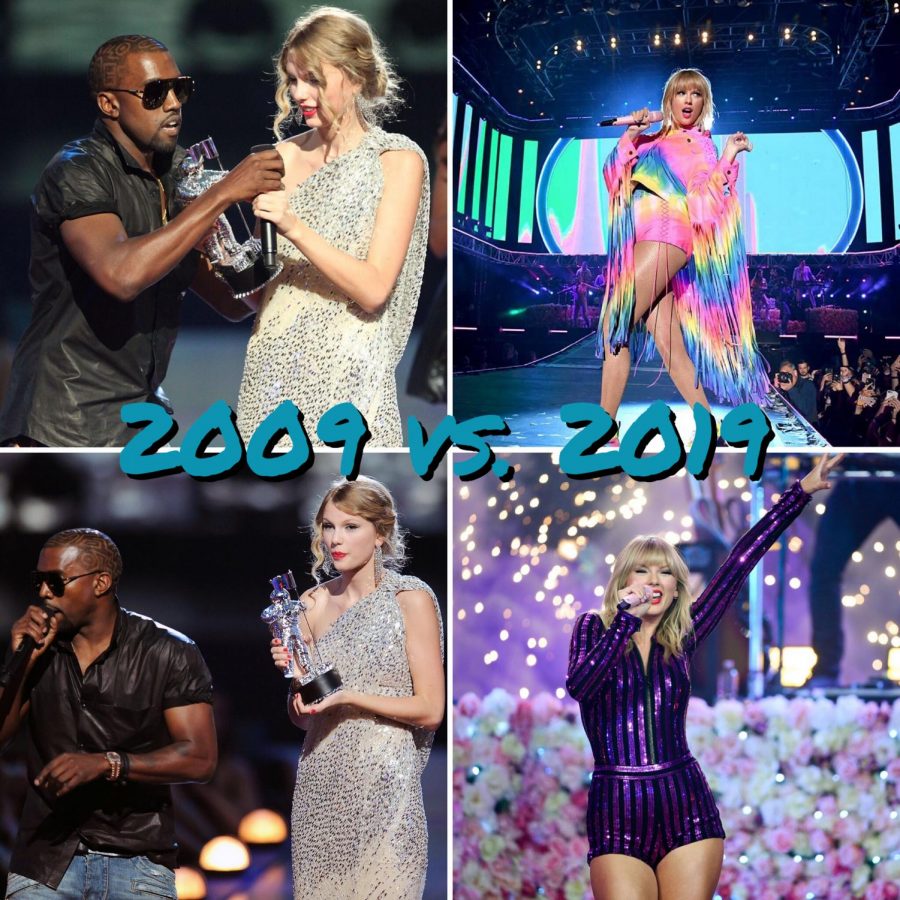 courtesy of People and Hollywood Reporter

On the left: Kanye West interrupts Taylor Swift’s acceptance speech for Best Female Video at the 2009 Video Music Awards. West received backlash and criticism from various public figures and celebrities for the incident, including Janet Jackson, Katy Perry, current president Donald Trump, as well as the president at the time, Barack Obama. West allegedly apologized in a post on his now-defunct blog, KanyeUniverseCity.com. On the right: Swift performs singles “You Need to Calm Down” and “Lover” from her new album at the 2019 VMAs.

For the first time in the 77 years since it opened, a blanket of silence fell over Radio City Music Hall. The audience, full of ordinary people as well as celebrities, watched the scene playing out on the stage with bated breath. Thirty seconds into Taylor Swift’s acceptance speech for Best Female Video at the 2009 Video Music Awards, Kanye West hopped on stage and snatched the microphone from her hand to give a speech of his own.

“Yo Taylor, I’m really happy for you, I’mma let you finish, but Beyonce had one of the best videos of all time!” West said.

West handed the microphone back to a dumbfounded Swift and absconded from the stage, ending the moment the Rolling Stone later deemed “one of the most infamous” in VMA history.

“I think everyone got angry at what Kanye West did to Taylor Swift. She seems like a nice girl and deserved the spotlight, not him,” NC senior Victoria Daniels said (Wolfe, 2009).

Established in 1984, MTV’s annual Video Music Awards recognizes artists that contribute to pop culture through their music and music videos. The award shows persevere the nature of the music industry each year, and looking back on them allows us to note its evolution and patterns. The 2019 VMAs aired on Monday, August 26, several days shy of the ten year anniversary of the “Kanye-Gate” incident. The differences between the two ceremonies show the changes in the music industry’s key players and the style of music listeners prefer.

Taylor Swift, Ariana Grande, and Billie Eilish won the most awards this year, each taking home three; Grande and Swift tied for the most nominations, receiving 12 each. During the main show, Shawn Mendes, Lizzo, the Jonas Brothers, Lil Nas X, Taylor Swift, Miley Cyrus, and several others performed.

Beyonce, Green Day, and Lady Gaga each won 3 awards in 2009, the most of anyone that year. The audience saw performances by Katy Perry, Taylor Swift, Beyonce, Pink, Jay-Z, Alicia Keys, and Green Day. While less than four of these artists received a nomination this year, none of them actually won a Moonman, aside from Swift.

Lady Gaga won Best New Artist of 2009 with her song, “Poker Face.” The song sold over 7,500,000 copies in the last decade, certifying it Diamond by RIAA standards. Can we expect the same level of success for 2019’s Best New Artist, 17-year-old Billie Eilish?

Unlike this year’s show, the awards categories in 2009 centered around music videos more than the music itself. Best Female/Male Video merged into Best Video, and MTV introduced categories such as Song of Summer, and Best Power Anthem, and Best K-Pop.

The two shows also differ in the number of viewers. The 2009 VMAs raked in the most viewers since 2004’s show,  with 9 million people tuning in. The 2019 VMAs broke the record for the lowest viewers in the history of the awards show, with only 1.93 million viewers.  A sharp decrease in celebrity attendance and MTV’s lack of credibility caused a significant decline in VMA ratings in the last three years.

It did not help that the host this year, comedian Sebastian Maniscalco, appealed to an older demographic than the show’s target demographic. However, social engagement for the show— aka, how much Twitter buzz it generated— increased 129% year over year. No matter how one chooses to look at it, one cannot ignore the undeniable truth— MTV’s Video Music Awards lost the prestige and greatness it once possessed.