From Boadilla to Kennesaw 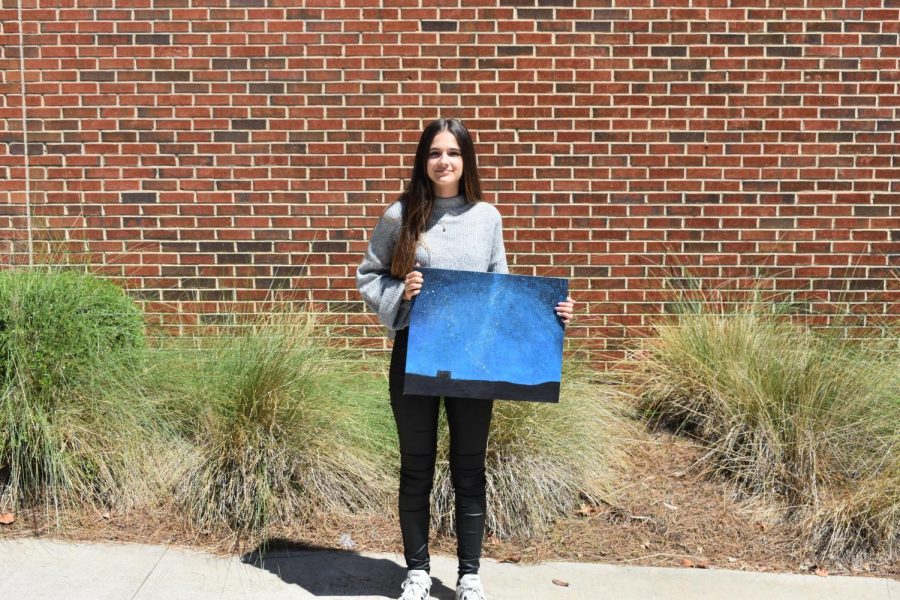 International exchange student, Aixa Rúa Rodríguez, stands on her temporary school campus sharing one of her paintings from her AP Drawing and Painting class. The painting features a star-filled night sky presumably from her hometown of Boadilla, Spain. As a sibling of a former exchange student, Rodriguez came with a good understanding of life in America.

The idea of traveling the world and experiencing new cultures is one that is often appealing. However, this idea often remains just an idea, but for Aixa Rúa Rodríguez, a foreign exchange student from Spain, this dream became a reality.

“I thought North Cobb was really cool compared to Spain.  I think I had a lot more options about what subjects I wanted to study, and they were really cool. I also enjoyed that after school there was a lot more to do. I joined the track and field team, and it was my first year doing track. I really loved it and everyone in the U.S. is really nice and open,” Jano Rodriguez, former foreign exchange student, said.

Rodriguez maintains a positive outlook on the year ahead even after she faced struggles on her first day at NCHS that included language barriers and the standard loneliness that comes with the status of ‘the new kid’, but handled it well.

“The first day I was very alone, and I ate alone too. But the second day I ate with another person. I’m still making friends though, I don’t have too much. I’m also used to speaking Spanish, not English, and the English I learned in school was British English so it is pretty different,” Rodriguez said.

In Spain, school starts around mid-September, and it carries on through mid-June. Each semester lasts about 11 weeks, and this definitely serves as one of the major differences between the school system in the U.S. and Spain.

“In school, we have fourteen subjects each year, and we have three semesters. The classes are obligatory and more difficult. The classes last about forty-five minutes, and the teachers come to us; we do not move classes,” Rodriguez said.

Rodriguez experiences other differences such as the food they eat at school in Spain, and the breaks they get during school.

“We normally start school at the same time, but we, for example, take lunch at two p.m. Our lunches are bigger, but our dinners are little. We have two 15 minute playground breaks as well,” Aixa Rodriguez said.

“She’s doing a great job. She’s really a very talented artist, and I’m excited to see how well she’s going to do for the semester.” Dowling said.

Rodriguez continues to persevere through the change in schedule, language barrier, and various other obstacles that come with studying in a foreign country. Rodriguez made a brave move when choosing to come to Kennesaw, and so far, she manages to prevail over every obstacle presented to her.

“Enjoy every moment in the U.S., Aixa, because the time will fly,” Jano Rodriguez said.