Dreams of AGES: The legacy of the Sega Dreamcast, 20 years later 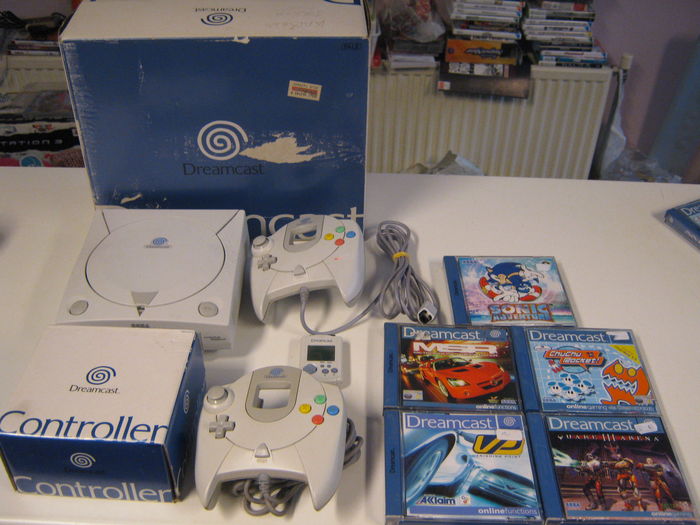 A vintage Dreamcast box set (containing from left to right, clockwise: Sega Dreamcast system, controller, copies of Sonic Adventure, Chu-Chu Rocket, Quake 3 Arena, Vanishing Point, and Metropolis Street Racer, and a second controller) lays on a table. Released on September 9, 1999, in North America, the console marked the end of Sega’s tenure as a console maker. Though a failure in its time, due in large part to the company’s prior failures and stiff competition from the Playstation 2, the console now holds a reputation as the most influential consoles of all time.

Brene Brown, the host of one of the five most-seen TED Talks, once said: ”There is no innovation and creativity without failure.” This sentiment applies to a multitude of areas: prior failures in aviation helped the Wright Brothers complete their first flight, the shortcomings of the IBM Simon pointed major areas of improvement to future smartphone makers, and even the fall of Athenian democracy proved essential in forming America. This should surprise no one: we see what came and failed before and we seek to improve on it accordingly.

Strangely enough, this idea of failure breeding success seems inapplicable to video games, despite the dozens of failed game consoles in the nearly 50-year lifespan of the industry. This seems odd, considering how quickly this industry evolved: in the fifth generation of consoles lasting from 1995-1998, game storage evolved from the common 4-64 megabytes (MB, unit for digital information) seen on a Nintendo 64 cartridge to the 750 MB seen on the average PlayStation disc.

On the other hand, the amount of money this industry generates means that no room exists to look into refining ideas from failed products, and to double down on proven formulas; this resulted in certain groups of gamers to call out the current industry as stagnant and creatively bankrupt.

However, one failed console exists that still influences the industry: the Sega Dreamcast. Despite Sega’s best efforts, the Dreamcast failed on all accounts: it only sold 9 million units in its total lifespan, compared to the 150 million sold by the rival Playstation 2. The console only lasted 2 years and lacked third party support from key developers like EA Sports, in addition to the notorious piracy problem the console faced. Most crucial of all, the Dreamcast came off the heels of other commercial and critical failures like the 32X and Sega Saturn which ended up losing the company a whopping $567 million.

Despite all that, Dreamcast gained a major cult following after its discontinuation, with legions of gamers calling it among the best consoles ever released. Moreover, its shelf-life finds itself greatly extended beyond Sega’s support, with a dedicated market of homebrew games.

Since the days of Xbox Live on the original Xbox, gamers viewed the ability to play online as a standard feature, and for good reason: besides generating $30 billion in revenue, popular games like Fortnite, League of Legends, and Minecraft earned their recognition because of how players around the world bonded with each other online. This notoriety, though taken for granted now, only exists because of the Dreamcast. Players would hook their system into a phone line with a modem adapter, allowing them to connect to the built-in SegaNet (an online internet service); this allowed gamers to download games at an unprecedented 56kB/s (kilobytes per second), a speed that shockingly fits comfortably within the PS4’s average. In addition, the practice of downloadable content (DLC) started on the Dreamcast, with games like Sonic Adventure granting players a slew of content like holiday event courses, yearly decorations, and even trials sponsored by brands like Reebok and AT&T.

The selection of games on the console serves as almost a time capsule for the variety seen in modern games. The trend of cel-shaded graphics (popularized by games like The Legend of Zelda: The Wind Waker and Borderlands) rose to prominence with 2000’s Jet Set Radio. The open-world and online action role-playing game (RPG) genres, both of which dominate the current landscape, owe much of their success to Shenmue and Phantasy Star Online, respectively, two massively ambitious games which established mechanics often taken for granted now. Most importantly, within an industry that increasingly alienates its consumer base, games so conceptually “out there” like Space Channel 5, Toy Commander, and Ooga Booga seem as meaningful, if not more, as any multi-million dollar game.

Like the SegaCD and Sega Saturn before it, the Dreamcast died as a result of its own ambitions. In hindsight, its failure seemed inevitable. In spite of that, Sega’s last console provided gamers with cutting edge tech years ahead of the competition and gave the industry new, fresh ideas that now steep the market. While failing in its own time, the Dreamcast still lives, in both the hearts of its fans and the concepts it introduced.