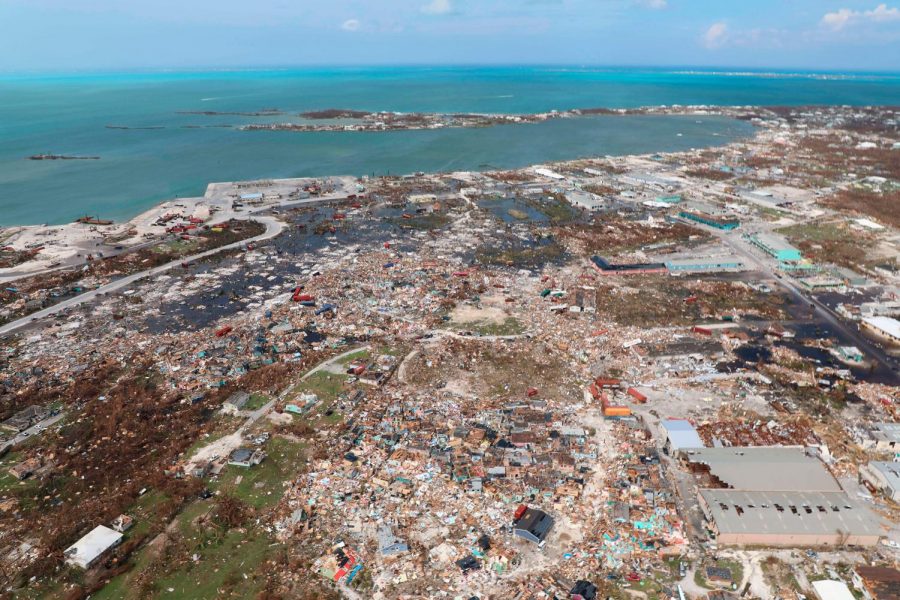 Hurricane Dorian, a strong tropical cyclone, continues to affect the Bahamas and the Southeastern United States. Dorian developed by a tropical wave on August 24, and over time, Dorian intensified into a major Category 4 hurricane. The following day, states prepared for Dorian by closing schools and keeping first responders on high alert. Hurricane Dorian reached Category 5 intensity, peaking with sustained winds of 185mph.

In the Bahamas, a warning to take cover spread to residents before the hurricane arrived.  The wake of Dorian confirmed at least 20 deaths in the Bahamas. Rescuers and first responders struggled to reach survivors and a government official says that it could take a billion dollars to fund reconstruction and recovery. Dorian continues to destroy homes and buildings in its path on its journey northeast. Recent predictions on the hurricane’s path indicate a warning for the northeastern states.

On August 28, Georgia Governor Brian Kemp declared a state of emergency for coastal counties that lay in the forecast path of Dorian. Multiple schools in the southeastern counties closed for safety measures. Savannah State University and the College of Coastal Georgia canceled their classes on Tuesday and Atlanta Motor Speedway opened their campgrounds free of charge for evacuees of Hurricane Dorian.

Florida Governor Ron DeSantis also declared a state of emergency for counties on Dorian’s expected path on the same day as Georgia. The next day, the warning expanded to the entire state. First responders distributed sandbags in counties to support buildings. In Brevard County, locals helped trim tree branches to protect the power lines, and universities in Florida canceled classes from August 30 to September 3.

Kay Ivey, Governor of Alabama, announced that the Alabama National Guard will send fifty personnel to aid in recovery efforts in Florida. Local Floridians and nation-wide industries helped to mitigate the damage to come within Dorian’s path. On September 1, DeSantis stated that more than 4,500 members of the United States National Guard helped those affected by Dorian in Florida, adding that the hurricane is “way too close for comfort”.

Companies also stepped in to aid the people affected by Dorian in Florida. Uber began offering round trips to shelters for under $20, Comcast gave free wifi to everyone in  Florida, and Verizon helped by providing unlimited calls and texts to its customers.

Dorian will steer on an accelerated path to the northeast later this weekend. An area of high pressure over the western Atlantic and the jet stream power the increasing forward speed. Compared to the people in the Bahamas, Dorian will cause insignificant damage to the eastern US, but they will witness an effect. Still, the northeastern states continue taking safety precautions to prevent damage. 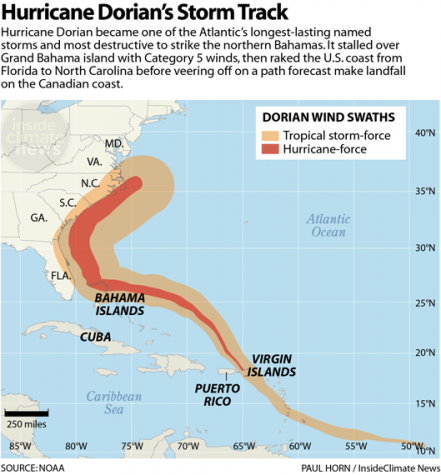 https://insideclimatenews.org/news/07092019/hurricane-dorian-record-climate-change-bahamas-north-carolina-gulf-streamThe radar represents the predicted path Dorian chooses as it heads up northeast. It has now passed over Nova Scotia and has left to the Pacific.

Late Saturday afternoon, Dorian made landfall over Nova Scotia with winds up to 100mph. The hurricane-force winds disrupted power generators leaving over 300,000 people in the dark Saturday evening. Emergency officials had urged residents of Halifax, Nova Scotia to remain indoors due to the broken trees and power lines caused by Dorian’s approach. After Dorian’s visit to Nova Scotia, the hurricane leaves Nova Scotians anxious for where its next target lies and, unfortunately, when Dorian’s brother and sister hurricanes will arrive.

The abundance of hurricanes raises questions among the public. Vox, an online newspaper, asked multiple hurricane experts on this topic. The experts claimed that a straight answer could prove difficult to find. The questioned specialist said that a simple explanation for the number of hurricanes that can form in a given year remains to be found.

“It’s a lot more nuanced than to say that you warm the water and you get a lot more storms.” hurricane professional Klotzbach said in an interview for Science Alert.

They confirm that warm waters prove as the main key to fuel multiple storms, but hurricanes remain influenced by other global trends such as El Niño and La Niña, two meteorological anomalies that manipulate the water temperatures in the Pacific.

Hurricane Dorian poses a challenging storm to predict, as well as any other hurricanes to come. Even if the increase in temperature plays an essential role in hurricanes, a variety of global trends can make the storms form in unexpected ways. The science behind these hurricanes remains a mystery to multiple meteorologists.