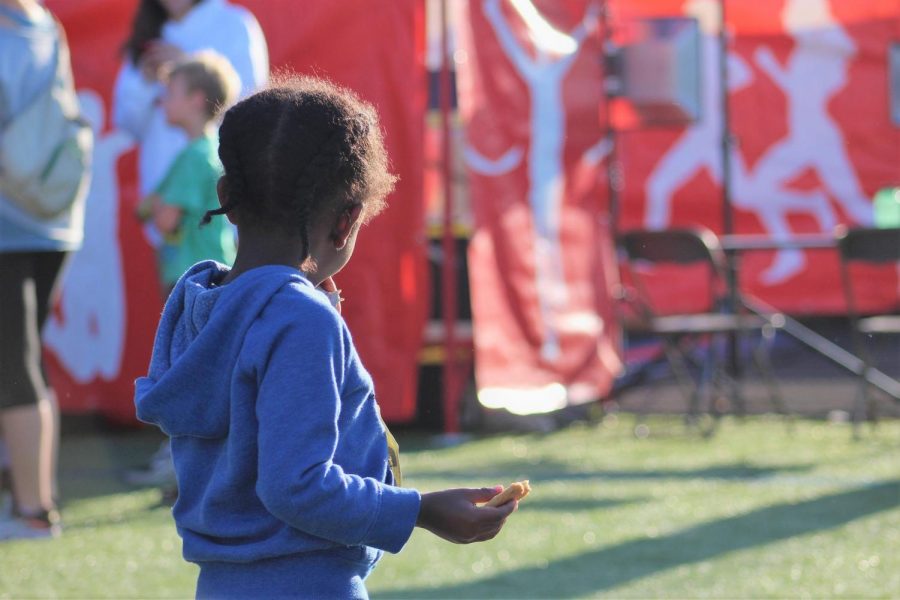 Small children participate in a 1K fun run around the football field. NC’s cross country team cheers and guides them as the children run two laps around the track, offering them a chance to compete in a race of their own and experience the feeling of sprinting across the finish. “Running the 1K with the little kids was really great. You get a chance to inspire them and get them to be the best they can be,” junior runner Xavier Fabian said.

As the weather shifts to perfect running conditions and the trees change color, the Warrior Way 5k marks the beginning of fall for Warrior runners. The team hosts the race every year on NC’s campus as their only fundraiser. Coaches, athletes, siblings and parents all volunteer to put on the race. This year the 12th annual Warrior Way 5k brought runners and sponsors from the Acworth-Kennesaw area to support the NC cross country team.

Regardless of age, runners enjoyed the race with the top three times belonging to men and women ranging from middle schoolers to adults. The fastest runner overall with a time of twenty minutes and fourteen seconds, Christopher Voge, fell in the 12 to 14 age group. Second place in men’s went to Timi Omoteso, a freshman at Kennesaw Mountain High School. NC senior and varsity cross country alumni Zachary Mills took third place.

In the women’s division, Samantha Peardon placed first with a time of twenty-five minutes and two seconds. Charlotte Christian, a seventh-grader, and Jennifer Loveland of the 35 to 39 age range closely followed her, both with times less than thirty seconds behind Peardon. Each finisher knew someone on the NC cross country team, family or not.

“I didn’t train as much as I have in years past but I definitely did train for this race. [Placing] shocked me. I was hoping to place in my age division, so placing third out of all the women was a happy thing for me. I’m competitive in nature, but I also came out to support my daughter on the cross country team,” Loveland said.

The coaches in charge gave other awards besides those related to speed; runners received awards for “most spirited,” “fastest alumni,” and “fastest staff member.” Each preregistered runner also received a race package that included a t-shirt and a variety of items from sponsors.

Throughout it’s past, the Warrior Way 5k existed as something more than a normal race. Through the efforts of volunteers, it became a way for runners, young and old, to connect with the community while enjoying a cool morning run, as shown again this year.