Darren Waller: from NC alum to the next NFL superstar 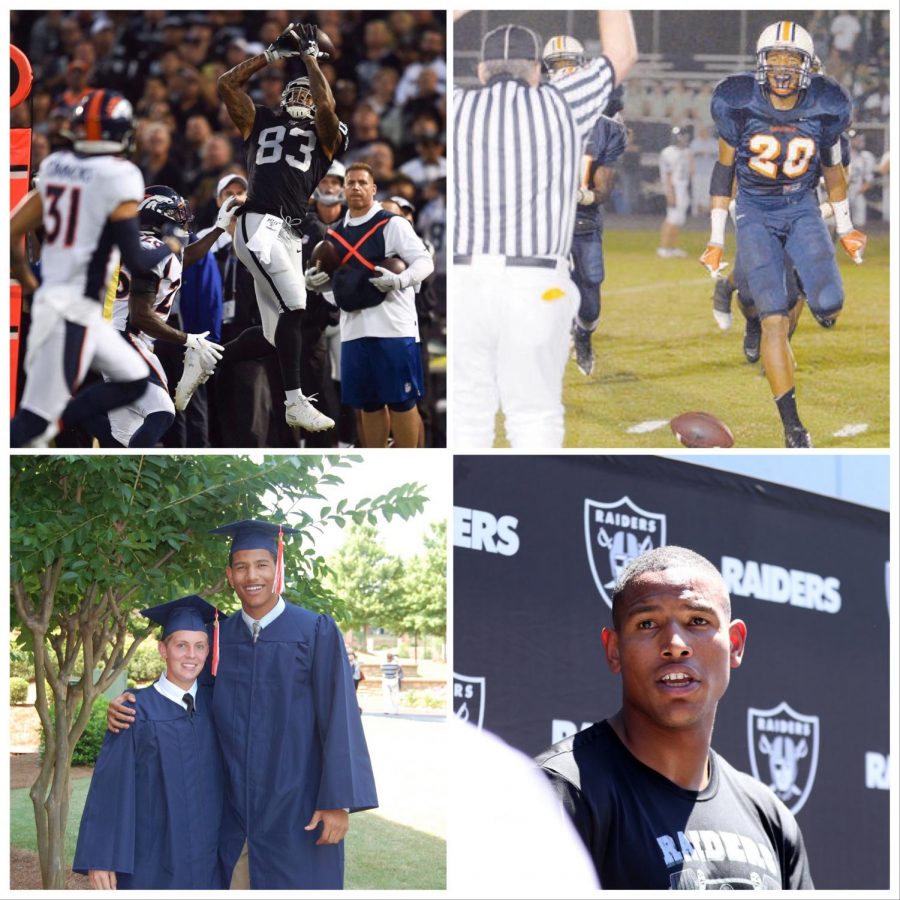 courtesy of Pam Stack, www.raiders.com, and The Chant archives

Darren Waller, former NC student-athlete, graduated with an athletic scholarship to Georgia Tech, eventually being drafted by the Baltimore Ravens into the NFL. clockwise from top right: playing in a playoff game in Emory Sewell Stadium, Waller approaches the bright lights of the NFL stage playing for the Oakland Raiders, at graduation alongside Evan Stack, another NC alum, and now regularly playing with the Raiders. Waller credits much of his preparation to his time at NC. “I play a lot of Madden NFL 20, and I’m really excited to use Darren Waller on the Raiders. It’s super cool that he played here at North Cobb and made it big in the NFL,” junior Brendan Koch said.

Measuring in at 6’6 and 255 pounds, NC alumni Darren Waller stands out above the rest.  Despite his colossal stature, coaches, family, and friends would describe him as a “gentle giant” with a strong moral foundation. Walking the halls of North Cobb High School, one can spot his name in the trophy cases and hear the legacy he left behind on the football field, and in the classroom. No matter the level of football (high school, college or the National Football League) Waller seems to keep his goals higher than his height and ultimately performs as a diamond in the rough for any team he plays on.

Throughout his time at NC, Waller studied in NC’s International Studies Magnet program and played free safety and wide receiver under head coach, Shane Queen. Between maintaining a high academic standard and totaling 122 tackles his senior year, Waller was offered and accepted an athletic scholarship to play football at the Georgia Institute of Technology.  At Georgia Tech, Waller proved his reliability as a receiver, recording his best season in 2014-2015. Though running routes in a triple-option system, where teams focus on racking up running yards in a three-carrier structure rather than passing, Waller tallied 26 receptions for 442 yards and six touchdowns his senior year, garnering attention from NFL scouts. In 2015, the Baltimore Ravens of the AFC North (Division of NFL) drafted Waller in the 6th round, hoping to use his size and impressive speed (4.46 second recorded 40-yard dash) to their offensive advantage.

Due to off-field distractions and internal struggles, Waller faced a four-game suspension from the NFL in the 2016-2017 season and then a year-long suspension for the 2017-2018 season for violating the NFL’s drug policy. As the three-time Grammy award winner, Kelly Clarkson would say, what doesn’t kill you makes you stronger; Waller proved this simple saying true. Through drug rehabilitation and gaining an understanding of his own potential, Waller came back stronger than ever.

In an exclusive interview between Darren Waller and The Chant, Waller opened up on a multitude of topics, including his time at NC.

“What I miss most about North Cobb is the interactions with my peers, teachers, and coaches. There are a lot of people in that building that helped prepare me, in their own unique way, to attack whatever would come my way in the future,” Waller said

Most recently, Waller agreed to a two-year $1,350,000 deal with the Oakland Raiders. Waller, converting from wide receiver to tight end, saw limited action for the Raiders in the 2018-2019 season, only appearing in 2 games. Despite a small stint in the last two games, Waller made multiple spectacular plays that raised eyebrows amongst the coaching staff. Continuing into the summer, Waller endured the Oakland Raiders’ yearly training camp, elevating his positional status. Before the 2019-2020 season began, Jon Gruden, coach of the Oakland Raiders, announced Waller as the starting tight end.

“Since the time he’s walked in here, he’s been one of the most impressive guys on our team. He learns fast. He is fast. He’s extremely talented. I think he’s going to be one of the best-kept secrets in the league. I really believe he’s got a future if he keeps working like he is,” Gruden said.

Along with his hometown Warriors following his great success, the Oakland Raider fanbase seems to take a liking to Waller’s story and playstyle. The HBO series, Hard Knocks, which studies NFL teams and dives into the stories that NFL players have gone through, featured Waller in the third episode of the newest season. His popularity among NFL players and fans suddenly increased due to the relatable perseverance he displayed through his suspensions. As Spiderman is known for saying, with great power comes great responsibility, so all eyes turned to Waller in the Oakland Raiders’ first game of the season Monday, September 9. On the opening drive, Raiders quarterback Derek Carr found Waller as his primary target, accounting for two completions and 36 yards in the first six minutes. Waller finished with a total of seven catches for 70 yards, rounding his yards per catch (YPC) to a first down average, along with earning a 24-16 win over the Denver Broncos. Week two of the NFL season, saw Waller making similar grabs. In a 28-10 loss versus the Kansas City Chiefs, Waller led the Raider receiving unit with six receptions for 63 yards. Week three of the NFL season featured Waller’s best performance to date, allotting for 13 receptions for 134 yards. Due to these consistent performances, NFL analysts and journalists project Waller as the “next big thing”. With Waller’s speed, size, and athleticism, the playing field stands limitless for the potential progression and impact Waller could make.

“My favorite team is the Atlanta Falcons, but since Darren is out there playing the sport he loves and is from the same high school as me, it really motivates me and has made me like the Raiders,” sophomore NC student-athlete Sebastian Schutte said.

The NFL lifestyle consists of a relentless work environment and a glamorous social status that numerous players succumb to. Though Waller struggled with this aspect, his football career came full circle, back to where it all began: Emory Sewell Stadium located on the West side of the NC campus. Between vigorous workouts and training camps, Waller allotted time for NC’s current wide receivers, regularly posing for pictures over the summer with athletes like sophomore Varsity wide receiver Sam Mbake and freshman Varsity quarterback Malachi Singleton, after the trio privately worked out together.

“I just try to show those guys that anything is possible if you fully immerse yourself in the work of whatever it is you want to accomplish. I always let them know that they are ahead of the game compared to where I was at their age with the extra work that they put in. If what you do challenges you daily, you have no choice but to grow. So when I work with them, I try to not only talk about it but be about it as well,” Waller said.

Through thick and thin, Waller continues to give back to the community that helped develop his character on and off the field. From the roars of the rowdy RingCentral Coliseum (Oakland Raiders stadium) crowd, and to the Warrior fight song played in Emory Sewell Stadium, Waller exemplifies the true meaning of a warrior mentality. Make sure to catch Darren Waller share his story to the community on Thursday, October 10 at the NC Performing Arts Center.

“I want to be the best player I can possibly be. I’m not too caught up on accolades, but I know that if I’m in constant pursuit of being my best self, special things will follow. I want to help addicts and people that struggle with mental health issues whether that’s through speaking, creating programs and infrastructure for their personal growth, or just letting them know there’s beauty on the other side of their struggle,” Waller said.