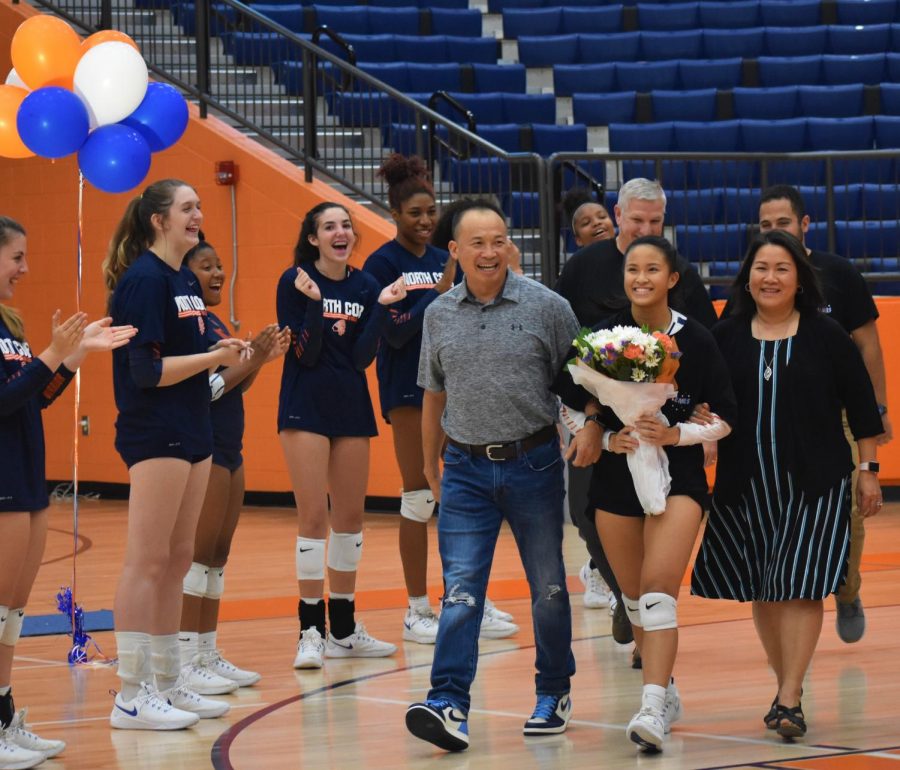 Escorted by her parents and older brother, Tran received overwhelming recognition for her four years playing as a varsity volleyball player on Thursday night. The stands, full of Tran’s best friends enthusiastically cheered on their friend as they listened to her favorite high school memories and her aspirations for the future. Tran’s team will dearly miss one of their favorite teammates when Tran graduates this spring. “Nicole is our best passer on the team, and she is leaving behind a huge legacy to the NC volleyball program,” said junior Ivanova

Thursday’s impressive match left spectators in awe of talents seen from both teams. The Mustangs beat NC in three nail-biting sets. Both teams made minimal mistakes, striving to win and beat their rival. This made each rally long as the ball barely touched the court. Tran, the team’s main defensive player, refused to let the ball drop even if that meant diving or sprawling to play the ball. Both NC and Kennesaw Mountain used a total of four timeouts in the first set alone. Concluding the first set 27-25, NC trailed two points behind the Mustangs despite tireless effort and their intense gameplay.

The second set, similar to the first, consisted of excellent plays from both teams with long consecutive rallies. However, multiple of these rallies came to an abrupt stop throughout the second set due to net violations made by both teams. In the second set, the Warriors scored the majority of their points by targeting the Mustangs’ weaknesses through serving and hitting. Finishing the second set with a score of 25-19, NC needed to win the third set to advance to the fourth and have a chance at winning three out of five sets. Unfortunately for the Lady Warriors, Kennesaw Mountain ended the game after winning the third set with a final score of 25-17.

Prior to the start of the game, Head Coach Steven Sansing began the Senior Night festivities with acknowledging the four seniors on the Mustang side of the net before recognizing NC’s seniors. He gave an emotional speech revealing how much this year’s seniors will be missed.

“These two seniors were both freshmen my first year here at NC, so it will be bittersweet to see them move on to bigger and better things,” Sansing said.

Williams received recognition first, escorted by her mother Gretchen Williams, sister Brielle, as well as her favorite teacher, Mr. Terell James. This marks her third year of playing as an NC volleyball player, and the first year playing as a varsity athlete. Outside of volleyball, Williams enjoys drawing and creating her own unique jewelry. Williams will leave NC in May with high hopes and ambitions for her future. She hopes to attend Augusta or Xavier University where she plans to major in Biochemistry and Molecular Biology to study to become a biochemist.

“It’s hard to find someone that brings the same energy as Baileigh; she is so unique and special,” junior teammate Katrin Ivanova said.

“Being on this team has taught me how to work with people with different personalities and skill levels, on and off the court; I had to learn the value of patience,” Tran said.

Tran will bring this skill along with all the others she acquired during her four years on the team to Melbourne, Australia where she hopes to earn her doctorate. After college Tran dreams of becoming a physical therapist and aspires to open her own practice.

During Thursday’s game, both Tran and Williams proved not only to teammates but to themselves that they invested their blood, sweat, and tears into this season. While the seniors will no longer play on the team, their memories and positive attitudes will live forever in the hearts of their teammates in seasons to come.

“Practicing together every day for three months creates a lot of good, funny memories. I will miss these girls,” said senior, Williams.

Even though the game didn’t end the way the girls hoped, multiple victories surfaced through the loss. The Warriors played their hearts out together as a team one last time at home before the graduation of their beloved seniors. Despite the tough loss, all who came to the game will forever treasure Senior Night and all the love and positivity embodied by the 2019 Lady Warriors.