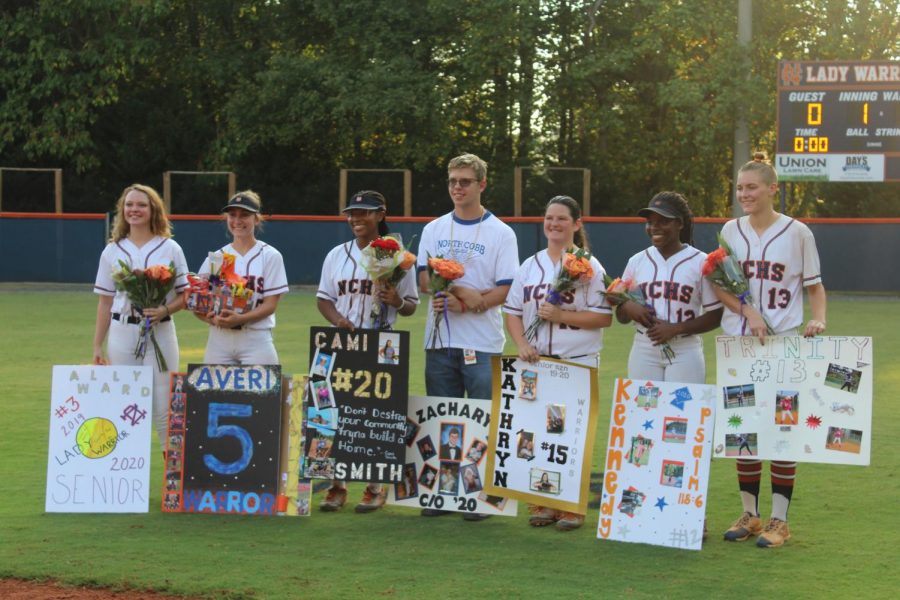 NC Lady Warriors faced off against the Hillgrove Hawks on their Senior Night Tuesday, October 1, 2019. Though the Warriors walked away with a loss, the defense filled the game with amazing plays, and they will walk into their next game with their heads held high. “Some of us have been playing together for five or more years and we created lifelong friendships and memories. Sometimes good things shouldn’t come to an end,” NC senior varsity softball player Kathryn Bywaters said.

On October 1, the last softball home game of the season, the NC Lady Warriors took on the Hillgrove Hawks for their annual Senior Night. Prior to the start of the game, the softball program recognized the six seniors on the team. They celebrated the seniors’ accomplishments throughout their years in the program.

Each senior stood behind their number painted onto the outfield and waited for the announcer to recognize them. Once announced, each girl, along with her family, walked through an arch formed by their teammates holding up their bats.

Senior and center fielder Kennedy Kirklin looks forward to taking this new step in her life as she hopes to one day become a teacher and coach high school softball. Currently an NC record holder for the most stolen bases, Kennedy sets the bar high for current and future players in the program. Kirklin leaves an impact on this team as she leaves her teammates with leadership skills, laughs, and good memories.

“Playing with these girls has taught me to play hard and play for each other, but know it’s okay to play for yourself too,” Kirklin said.

With a scholarship to play softball at Agnes Scott College in the fall, senior and left fielder, Trinity Wilkinson left it all on the field. Earning the best offensive player and best hitter awards her sophomore and junior year, she contributed much to the team. Along with softball, Trinity also participates in cross country and basketball making her a triathlete. When a practice or a game became challenging, Trinity motivated her teammates and kept their spirits up. Wilkinson kept the team laughing with her hilarious jokes and locker room dance battles. The teammates she leaves behind will miss her dearly as she moves on.

“Sometimes we win and sometimes we don’t, but playing with these girls makes the worst of games feel like the best ones. Having that support system is amazing,” Wilkinson said.

First baseman Averi Childress a.k.a “Mama Averi” held a heavy leadership role on the team. Whenever the girls needed something Childress always came to the rescue. Childress not only stood out on the team but in the classroom as well. Her freshman, sophomore and junior year, Childress earned the highest GPA at NC making her a prime example of a well-balanced student-athlete. In the future, Childress hopes to go to college wherever it seems the best fit.

“It stopped being about wins and losses a long time ago for me. Having fun on and off the field is all that really matters. The six of us have truly become family over the years,” Childress said.

Senior Cami Smith, a third-year Varsity right fielder made plays that caught the eyes of everyone on the field. When a heart-stopping play meant the difference between a win and a loss, they could count on Cami to slide, dive or jump to get to the ball. The program will miss her as she plans to move out of state after graduation.

Senior outfielder Ally Ward, a new addition to the varsity roster played well in her short time with the program. After graduation, Ward plans to attend Athens Technical College and major in architecture with a minor in civil engineering to one day become a civil engineer.

“I’m new and I don’t play much, but I’m glad I got to be a part of something special. These girls are like family now,” Ward said.

While overcoming severe injuries to her finger and ankle, Senior and third baseman Kathryn Bywaters bounced back and assisted her team in winning games. Bywaters showed constant support to her team, whether she wore a splint or boot to a game and could not play. The fourth-year varsity player loves the NC team and plans to continue her softball journey. In the fall, Bywaters plans on attending Fort Valley State University to play softball.

“Senior year comes fast and before you know it it’s all gone. Enjoying your time in the program is important because one day you’ll blink and you’re playing your last game,” Bywaters said.

Shortly after the ceremony, the game began and freshman Sydnee Wendell took the mound. At the top of the first inning, despite the Warriors playing a tight defense, the Hawks scored eight runs. However, in the bottom of the first inning, Kirklin led off and hit an eye-catching double. With a multitude of base hits in the first inning, the Lady Warriors, unfortunately, did not score any runs.

By the second inning, the Hawks hit five singles and scored four runs. NC struggled for the first half but recovered in the second half of the inning. Despite their efforts, their scores remained the same. Sophomore Bailey Brumley swung away but did not pull through in the end. The fourth inning went scoreless for both teams and by the fifth inning, the final score came to 12-0 Hawks. Even with a tough loss, the team will walk into the next season with their heads held high and bats up.