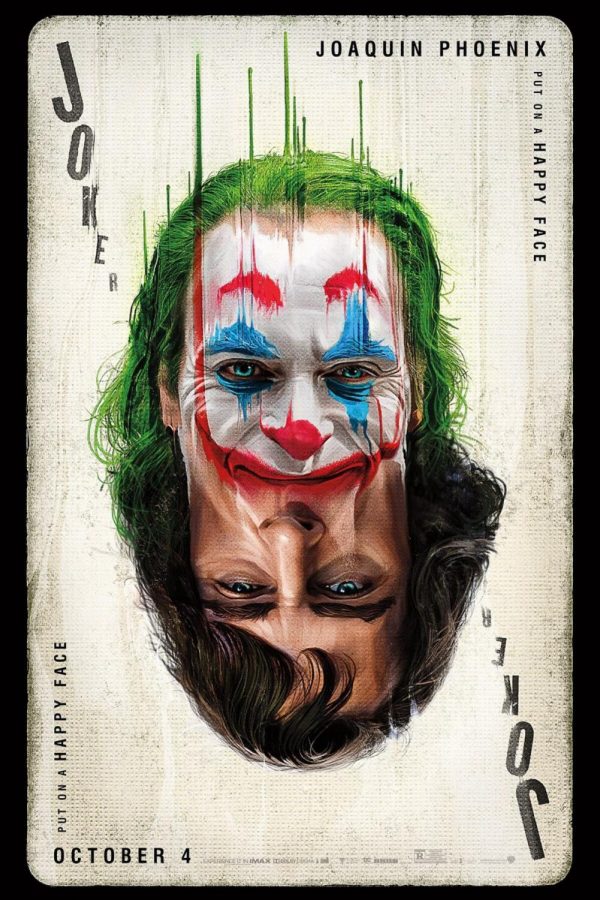 The final poster for Joker released two weeks before the film’s release. The new film, based on the iconic DC supervillain of the same name, stars Joaquin Phoenix, Robert De Niro, Zazie Beetz, and Frances Conroy. Directed by Todd Phillips (War Dogs), the film tells the tale of failed stand-up comedian Arthur Fleck who, after society constantly rejects and neglects him, becomes a symbol of chaos and unrest in a 1980’s Gotham City.

In his 79 years of existence, the Joker earned a reputation for his various forms: a goofy Silver Age prankster, a recurring nightmare as shown on Gotham, or even an “agent of chaos” created to oppose Batman. Most people would not, however, call the jester well-documented. A handful of origins for the Clown Prince of Crime exist, most notably Alan Moore’s Batman: The Killing Joke. A large portion of fans, however, believe the Joker works best when (as the Clown Prince of Crime said in Killing Joke) “[his past is] multiple-choice”; it seems like his recently released movie, Joker, will do the exact opposite, and create a definitive tale of his rise.

Directed by Todd Phillips, this film tells the tale of Arthur Fleck, a mentally ill comedian rejected by society who becomes a symbol of Gotham’s resentment toward the elite. The film thrives on its performances; Joaquin Phoenix’s Fleck perfectly depicts the nuances of living with mental illness, with scenes of him alone in his apartment, in particular, showing his devotion to understanding everything about this character. Robert De Niro delivers a great performance as sleazy talk show host Murray Franklin, who plays a crucial role in Arthur’s descent. The best performance in the film, however, goes to Brett Cullen as Thomas Wayne; while Alec Baldwin initially scored the role as a “1980s Donald Trump” (only to drop the role a few days later), Cullen picked up the role, playing the industrialist and mayoral candidate as a complex and intricate look into the modern elite .

Speaking of the script, viewers should appreciate its complexity and depth. Unlike most period pieces, its 1981 setting serves not as a hindrance but instead allows Phillips to perfectly weave in modern-day issues (from affairs between the rich and their employees to even the treatment of women) without seeming out of place. This comes to show in the last 20 minutes, as one particular spoiler-filled scene during this time contains two of the most powerful lines in a comic book movie to date. Joker, by far, thrives on its visuals and set design; gorgeous cinematography allows viewers to perfectly see this version of Gotham City like a nightmare while using the camera to put us in Fleck’s shoes. As for the atmosphere of the film, the cramped and confined interiors perfectly represent how Joker feels oppressed by society, while the outside shots perfectly contrast the grimy lives of the average citizen to the glam and glitzy lives of the rich.

Despite this, the film could use some ironing out: the pacing speeds up a bit too much around the 35-minute mark, and most of the cast never receives any spotlight  (Phoenix, Cullen and De Niro). The main problem with the film, however, stems from not evolving on the central theme of the film (charismatic loner rebels against the society which rejected him): a premise that films like Natural Born Killers and A Clockwork Orange used with greater creativity. This film uses an overdone charismatic loner trope, failing to innovate or expand the theme in a fitting way for the iconic character.

Regardless, this film definitely deserves its recent praise from the media and awards, namely the Golden Lion at the Venice Film Festival. To see a film about a cultural icon like the Joker markets itself as high brow cinema, setting an exciting precedent for the future of superhero movies. Oftentimes reports of superhero fatigue or the Marvel formula hit the internet, an increasingly valid claim considering how films like Ant-Man and the Wasp or Justice League earned criticism for not expanding on the formula. But with Joker deviating from that formula so heavily, and with movies like the POV-driven detective noir of Matt Reeves’ The Batman, the genre seems willing to truly embrace the unique visions of their directors. Who would ever imagine—The Joker inspiring Batman?

The Chant’s Score: A-