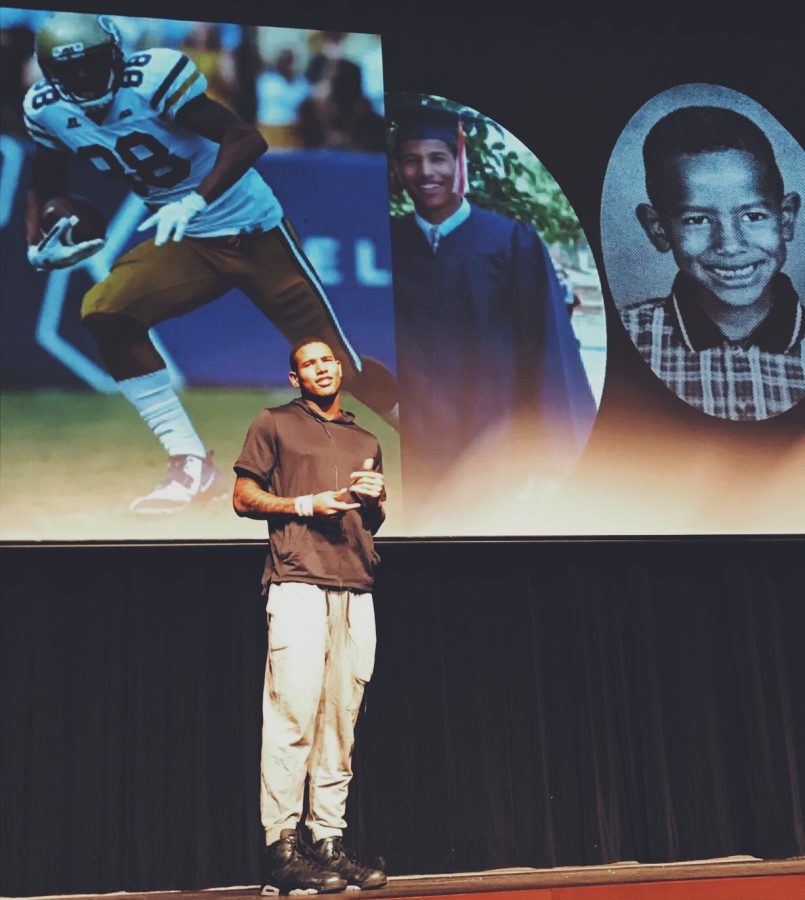 Oakland Raiders’ Darren Waller stands on the stage of NC’s Performing Arts Center, in front of pictures of his younger self. The theatre packed in listeners with a variety of questions to ask Waller after his emotional speech. Waller joins the crowd outside the auditorium after the presentation comes to a close, taking pictures with fans young and old.

Darren Waller, NC alumnus and current tight end for the Oakland Raiders, paid a visit to his home school on October 10 to warn against the dangers of drug abuse.

Waller took the stage in the Performing Arts Center, dressed casually, and began with a quip about the young pictures of him displayed on the screen above his head. His voice projected, tinged with a slight southern accent that told of his Georgian upbringing. Waller wanted to share his story in the hopes of it reaching those who might need to hear it.

The now-grown football player described his deep desire to fit in as a young boy, and how his feeling of alienation within friend groups contributed to the start of his drug problem.

“I felt alienated, I felt like there was something wrong with me,” Waller said.

When he began high school, he started to act out. His teachers would describe him as rowdy during classes and a source of unwanted disruption. When he discovered football, he finally felt he found a purpose.

“Football was a tool for me to fit in. It became my way of being me,” Waller said.

“I remember taking it [painkillers]— that feeling— it took the pressure off of me,” Waller said.

The more pressure Waller reported feeling, the more drugs he would take. This spread to marijuana and alcohol as well. Waller started to look at football as a chore, something he must do because people watched him, expecting stellar performances and role model behavior from him.

Waller’s addiction continued throughout high school, and as it became more prominent, so did his future in football. Senior year, he signed with Georgia Tech as a receiver.

College in no way diminished the issues Waller faced. Coming into his freshman year, Waller developed a mindset of entitlement—that if he just showed up, things would go his way.

“Drugs turned me into a selfish person,” Waller said.

The pressure built for him and suddenly he found himself in trouble. Waller was drafted to the Baltimore Ravens and suspended twice during his time playing for them, both times for off-field problems concerning his drug habits. Although drafts are regarded as exciting and emotional events, Waller felt little joy when he received the call letting him know that the Ravens drafted him. He attributes this to his mentality at the time, born from drug addiction.

“You just walk around living a life that everyone appreciates but you,” Waller said.

Waller wraps up his story by telling of his rehabilitation and the humbling experience of suspension from a National Football League (NFL) team.

His speech struck a chord in every listener, and so did stories from sponsors that spoke before and after him. Drug abuse touches far more individuals than countless people will ever understand and the repercussions of addiction can deliver fatal consequences. NC thanks Waller for sharing his story and wishes him luck with his future in the NFL.