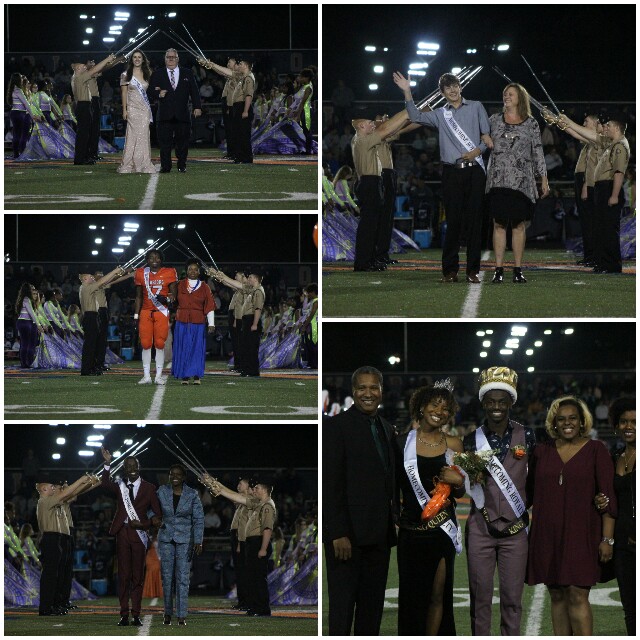 The members of the 2019 senior Homecoming court walked the field this past Friday during the halftime portion of the Homecoming game against North Paulding. Court members, clockwise from the top left: Cat Kulat, Trevor Bacak, Sydney Thomas and Josh Dixon (who eventually won the title of Homecoming Queen and King, respectively), Baldwin Ndongo, and Grant Wooten.

Popular people, despite what certain stereotypes say, live pretty fulfilling lives: people actively seek their friendship, the groups they occupy love them, and opportunity awaits them at every turn. One of the more hidden aspects of popularity deals with individuality, as the increased recognition allows more people to see and appreciate them and everything that someone themselves; nothing better represents this than the 2019 senior Homecoming court.

Every year, students nominate boys and girls that they believe represent in the best way. Students later vote among these nominees for eight finalists, and eventually choose a King and Queen, each contestant bringing their distinct personality and traits to the table.

Considering how over a thousand students attend NC, it makes sense that a prospective student running for the court would doubt their ability to make the cut. Senior Trevor Bacak, who plays the trombone for the band, felt the same way when he threw his name in the ring, but upon finding out he made the cut, he could only feel gratitude for those who supported him.

“For one, I didn’t think I was going [on the court until] I got on it. But when I heard my name, I couldn’t help but smile: it’s not something that I expected to happen, but I’m really grateful that it did. I want to thank everyone who did vote for me-I know most people vote for random people, but if people voted for me who actually knew who I was I’m really grateful to them. Most of [the people around me] were really surprised; they didn’t know I was even running,” Bacak claimed.

When asked about his chances of becoming King, Bacak seemed largely content with the likelihood of not winning and happy with this experience.

“Considering that when I got nominated the people in my class didn’t even know I was running, I’m not really optimistic about [my chances of ] winning. I’m honestly happy that I get to go on the field. I really hope I do win, but if I don’t I’m going to be happy for whoever does win,” Bacak said.

Trying to land a position on the court can cause a great deal of stress, especially when one considers the high possibility of failure; but Jessica Robles seemed fairly relaxed about it all, recognizing the fun but ultimately fleeting nature of this process.

One reason Robles lacked any real measure of stress likely deals with the fact that she already understands this process. For those unaware, she ran for Homecoming court in her junior year and won the title of Homecoming princess, an experience which helped in her efforts this year.

“I think that it [the experience of making it onto Homecoming court last year] helped in a way because the same people that voted for me last year were willing to vote for me again this year,” Robles said.

As mentioned above, a great deal of people attend NC, and as a result, those who want to win the title need to rally as much support for themselves as possible. Varsity baseball player and eventual Homecoming King Josh Dixon understood the value of socializing with his classmates, and put in the effort to spread his name out; though his methods seemed simple, they worked.

“So I did two main things to rally support for myself: I made digital flyers, posted them on social media and sent them to close friends who also shared them. I also made little candy bags to hand out to people with my name on it, and it said ‘HoCo King’,” Dixon said.

Though this strategy might sound obvious on the surface, it takes up a great deal of time to make posters and candy bags promoting oneself. Despite that, Josh wanted to give advice to underclassmen considering running for court.

“I would just say reach out to various groups of people: don’t just stick within your friend group. Network for yourself, since it’s good to know people,”  Josh said.

Not everyone on the court knew for sure they wanted to run: after all, “life is a series of natural and spontaneous changes” as the ancient philosopher Lao Tzu explained. Section leader of Marching Band’s percussion section Cat Kulat decided to live out this maxim and sought out this new perspective.

“I decided to run for court on the fly: I asked a couple of friends if I should run because I had been thinking about it before, but because I’m in marching band it wasn’t really an option for me; I just thought it would be fun. I had never spent a marching band game not in the marching band or with my front ensemble, so I thought it’d be cool to see a game from everyone else’s perspective instead of what I’ve seen for the last 4 years,” Kulat explained.

When asked how she sees her chances of becoming senior Homecoming Queen, Kulat acknowledged the popularity of her fellow contenders while also making it clear she did believe she could end up wearing the crown.

“I’m [generally] optimistic in everyday life, so I don’t think I have the worst chances, but I also know that the other nominees on court are very well-liked, and for good reason. So, I’ll give myself a 50/50 shot: I don’t want to be overly confident,” she said.

Popularity can, and often does, play a large part in securing someone the position of King or Queen; but how one carries oneself can play just as large a role, if not a larger one, in the process. Senior Baldwin Ndongo advises future seniors to do the same, seeing it as the best way to rally support for oneself.

One would see Grant Wooten, middle linebacker for the NC Warriors football team, as a shoo-in for any spot on the court, but in his mind, he sees himself as one student among plenty of other students vying for the crown. Despite acknowledging the stiff competition he faced, he still believed in himself and his ability to win.
“I didn’t really expect to be on Homecoming court, but once I got nominated I figured why not give it a shot? It’s senior year, I might as well make the best of it. I think I’ll win, just because of who I am: a lot of people know me because of what I do on Friday nights on the football team, so I think that’ll give me an advantage. But at the same time, I know there’s a lot of good people [on the court]. I’m just doing it for the experience really, not just to win it,” Wooten said.

Sometimes the shock of discovering one’s placement on court overrides anything else, as is the case with Makeyah Guy. Like everyone else on the court, her initial reaction to the announcement of her placement saw a great deal of joy.

“I was very surprised but grateful: I also said things like,”I can’t believe it’  My friends, as well as my teachers, started hugging me and screaming, and I was still in shock”, Guy said.

Like Robles, Guy also knows the process of running for court well, running and winning a spot her sophomore year. Guy retreaded her prior path to victory.

“I do have experience [running for court] because I won sophomore Homecoming princess. I just did the exact same thing as I did last time, sent my name and pictures of myself that said vote for Makeyah Guy. I told a lot of people my name, and I asked people I knew to vote for me,” Guy said.

Realistic thinking might not seem like a skill needed when running for a position in high school, Homecoming court or otherwise: one puts one’s name out there, convinces people to favor oneself over the competition, and hopes for the best; but in the case of Sydney Thomas (who eventually won the title of Queen), this kind of thinking played a key part in her decision to run for court this year.

“I always wanted to be on the court in ninth grade, but I knew that I actually wanted to be able to run for Queen, so I just waited until senior year. A lot of people run [for the court] multiple times [throughout high school], but I wanted to until a year where I could run to actually get something,” Thomas said.

Like Dixon, Thomas also took steps to put her name out there, using her social media to promote herself in a more direct manner; she used this method as a way to ensure those who would vote for her did so not out of obligation, but out of a genuine desire to see her succeed.

“I basically just used social media as my main platform, so I just made little posters and sent it to my friends that said to vote for me for Homecoming court, and I asked them to repost it. I then asked my friends in person if they didn’t have anyone to vote for, to put my name out there. I didn’t hand anything out, because I felt like if someone wanted to vote for me I wanted them to vote because they wanted to, not because I gave them something,”

The King and Queen received their crowns and took their yearbook photo halfway through the dance, with their special slowdance taking place shortly after.