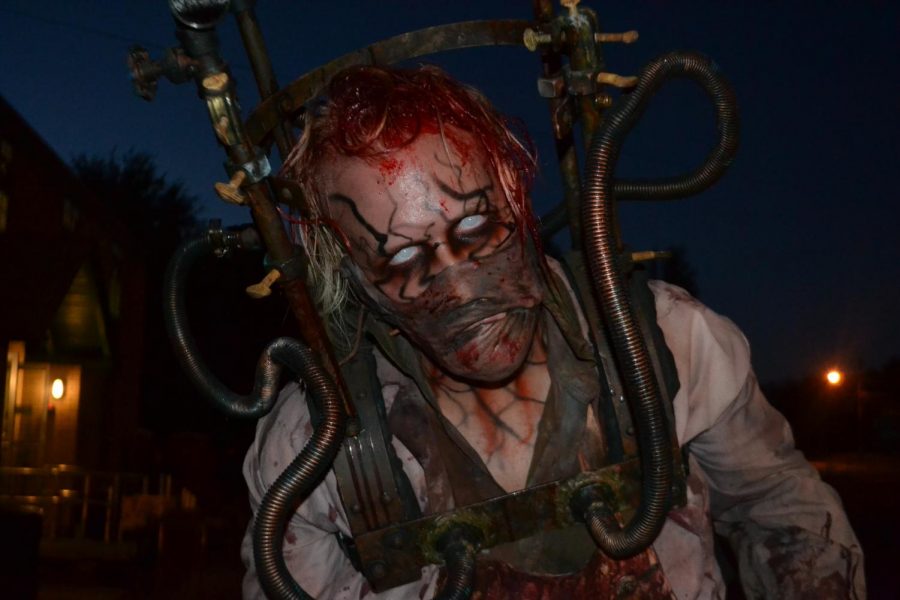 Actors await their terrified prey outside haunted houses as they hope to scar spine-chilling memories into the brains of their victims. Paranoia’s actors appeared overall scarier than Folklore’s. “Folklore was fun but it wasn't scary enough,” said sophomore Colin Fulton.

Both haunted houses create a perfect environment to indulge in creepy memories this October, with each bringing their own promising characteristics: Folklore’s haunted houses beat those of Paranoia when it comes to proximity and affordability, however, Paranoia wins when measuring spookiness.

“It’s so much fun to go to haunted houses this time of the year, I love being scared with my friends and laughing about it afterward,” sophomore Kenna Armitage said.

Located just minutes away from NC in Acworth, Folkore offers its audience general admission including entry into three haunted houses costing attendees $27. These guests can spend an additional five dollars to purchase a simulated ride to the grave in an enclosed coffin. Several brave souls believed this proved scarier than all three haunted houses combined. The multiple haunted houses located on Folklore’s grounds lacked the nerve-wracking thrill that is experienced when visiting Paranoia; actors and actresses dressed in horrifying costumes hid behind surgical tables and fake trees within the first two haunted houses at Folklore: The Manor and The Asylum. Experienced haunted house enthusiasts easily predicted these hiding spots, which may have ruined the suspense and their expectations of a good scare.

“Folklore isn’t too scary, I have been to scarier haunted houses so I wasn’t scared, but my friends were scared plenty of times so it wasn’t boring,” Armitage said.

While Folklore doesn’t resemble the epitome of terror, it serves as a great first time haunted house. However, horror seeking fanatics will find what Paranoia offers more satisfactory.

Paranoia, located in Canton, Georgia, offers an exceedingly terrifying experience. Both haunted houses cost a total of 35 dollars; but despite these tickets coming at a higher cost with fewer attractions, its simplicity proves the well known saying “quality over quantity” extremely true. Frightened visitors at Paranoia clung to the edge of their seats as they walked through the attractions, like Hexed and Quarantine. Both houses contained numerous actors awaiting their victims. These costumed actors perfectly portray their characters and manage to scare almost everyone they encounter. Paranoia’s high tech visual and sound effects create a spine-chilling illusion of the infamous fear surrounding Halloween. Thick fog covered multiple rooms in Paranoia’s haunted houses to impeccably cloak their talented actors waiting to petrify their victims. Paranoia’s actors outnumbered Folklore’s and gave victims fewer hiding places to avoid their wrath. In addition to fog, Paranoia utilizes strobe lights to illuminate the frightening features of the freakish appearances of the actors lurking in the darkness.

“The jump scares are the scariest part of haunted houses, they are what makes spooky season so much fun,” sophomore Colin Fulton said.