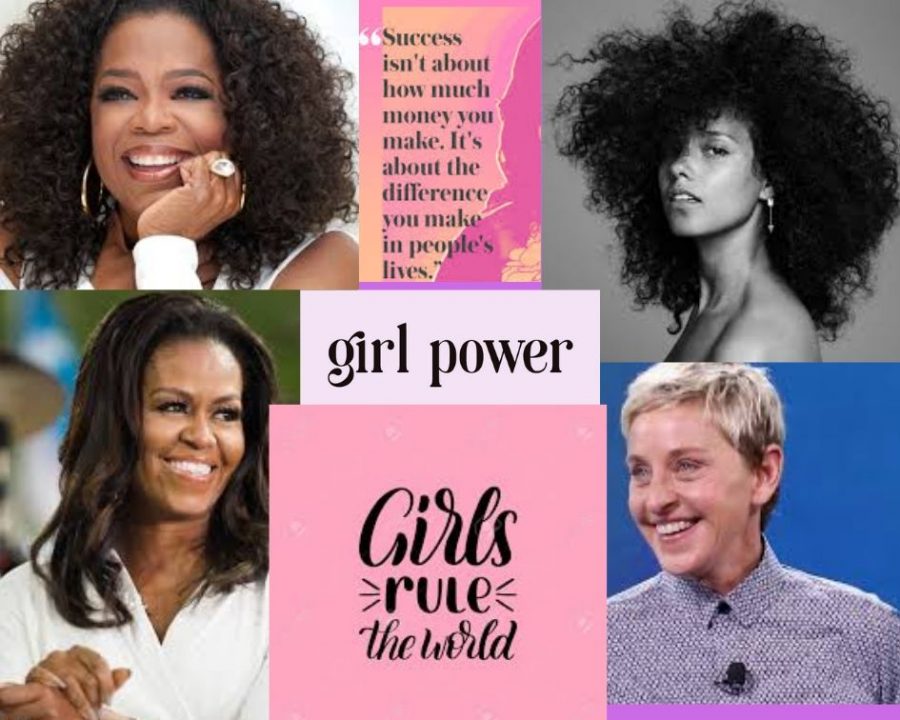 assembled in Canva; with thanks to Oprah, eonline, business insider, consequences of sound, stylecaster, revuebyscout and 123rf

In a male-dominated society, the brave women taking a stand against popular stereotypes, are becoming role models in today’s world. Since the dawn of man, womens’ social status relied on their ability to take care of the kids, the house, and making dinner for the family. Amid the cultural expectancy came anger and intolerance, with obstacles to women’s suffrage, unequal pay of women in the workforce and the lack of female politicians provoking change in a woman’s role in society. As these women take a stand, the impact of their actions becomes more evident in changing times.

Chicago-born, former First Lady Michelle Obama serves as one of the best examples of a female role model, one who relies on education as her escape in everyday life. Coming from a hard-working, middle-class family, she excelled in school, attending Princeton and Harvard and later becoming a successful lawyer. In November of 2008, her husband Barack Obama claimed victory as the newly elected president of the United States.

By Obama’s side, she reigned as the first lady for two presidential terms, instituting healthy eating programs and exercise habits with her popular Let’s Move campaign. She convinced young kids and adolescents to exercise and establish healthy eating habits to end the high obesity rate in the United States. In addition, Michelle stood for education and justice in the public school system by visiting Malala Yousefi, a Muslim girl who fought for female equality in Middle Eastern schools. As the first African-American First Lady, she did an excellent job, setting the bar rather high for current First Lady Melania Trump.

Alicia Allego Cook, professionally known as Alicia Keys, grew up in the heart of New York City with her mother and grandmother. Through the struggle of life without a father, she developed a love of music, learning piano and singing as a way to escape from reality. She began her career in 2001 with the debut of her debut album Songs in A-Minor. 6 albums and 15 Grammy awards later, the star now serves as an activist for “Keep a Child Alive”, an organization dedicated to the wellbeing of children infected with the AIDS virus.

Alicia Keys also serves the role of a female activist, wearing no makeup as of 2016. Keys stopped wearing makeup to show girls and young women everywhere the value of natural beauty as opposed to wearing makeup, allowing women to ignore the social hatred and bigotry that applies to the female appearance. As her millions of fans look up to her and enjoy her musical masterpieces, the role of a powerful female figure continues to funnel into her career.

Ellen Degeneres, popular daytime TV show host and comedian, began her successful career performing stand-up comedy after her hit sitcom Ellen canceled due to her coming out. Aside from the struggle of losing her beloved show, she stayed unemployed to find work, turning to comedy as a safe place. After three years of unemployment, she debuted her comedy on Johnny Carson, becoming the first female to ever perform on the show.

Ellen now hosts the Emmy winning daytime talk show The Ellen Degeneres Show and teaches her viewers that no matter what background or story a person portrays, success can follow. She shows her viewers that kindness goes a long the way, giving away prizes and money during the show. She teaches people everywhere that spreading kindness and light to everyone generates a positive atmosphere and a better life.

Oprah Winfrey, a successful TV host and philanthropist, lived with an abusive immediate family during her early childhood days. Her cousin, uncle and family friend abused Oprah as early as the age of two, scarring her for life. However, she did not live an entirely terrible childhood. At the age of 12, she moved to Nashville, Tennessee to live with her strict father. During this time, she gained an appreciation for education, excelling in school with straight A’s and participating in numerous extracurriculars.

In her senior year, she received a full-ride scholarship to the University of Tennessee, focusing her major on TV production and broadcasting. She eventually moved to Chicago to host a popular morning radio show called Baltimore Is Talking. After years of media training and experience, she received the full-time position of hosting her daytime talk show The Oprah Winfrey Show, winning multiple Emmys and awards throughout production. Today, Oprah runs the successful channel Oprah Winfrey Network (OWN) and continues to inspire her viewers to maintain hope amongst the chaos, showing to all children and adults everywhere that humble backgrounds do not determine a person’s future, that females can make an impact on the world no matter what their story previously told.

As today’s world transitions out of a male-dominated society, female empowerment continues to popularize, becoming a prominent in everyday occurrences. As females gain importance in today’s world, the possibility of a first female president, equal rights in the workplace, and other advances for women will become a reality. The goal, for now, relies on strengthening the political and social implications that apply to women in the 21st century and until things improve, the constant fight will continue.