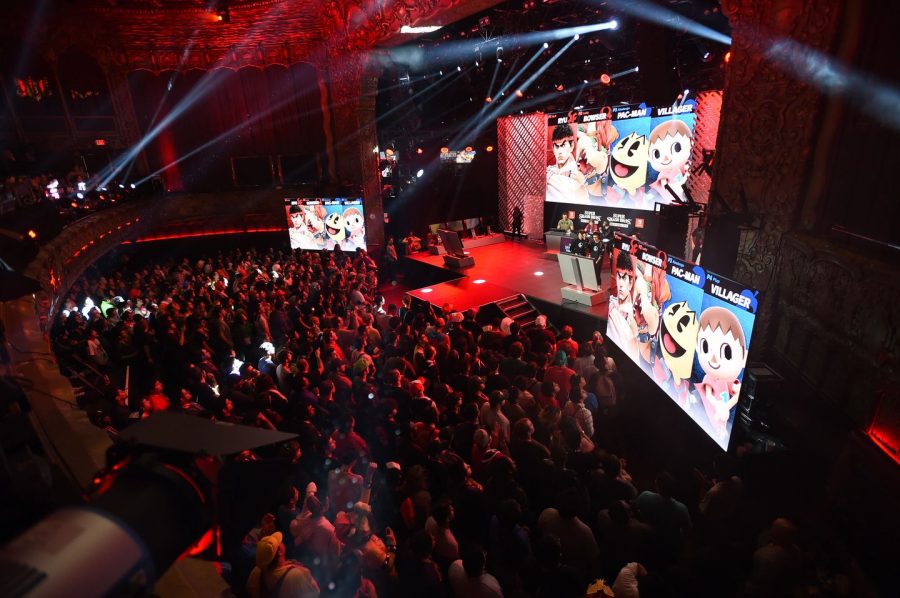 A crowd of gamers watch in awe of the 2018 invitational tournament for Super Smash Bros. for Wii U. As one of the most popular competitive games in recent years, it makes sense that NC’s own eSports club would play this game. The club, founded by juniors Liam Phillips-Denson and Aaron Wilson and overseen by Mrs. Cox, provides the gaming community at NC an opportunity to play their favorite games with other like-minded students. They meet the second and fourth Monday of each month in room 115.

Joining a club often comes with a variety of benefits: meeting and bonding with new people, less time worrying about stressful aspects of one’s life, etc. Arguably the biggest benefit deals with how clubs grant students an outlet to creatively express themselves through dozens of activities. The variety of clubs at NC allows students to explore hobbies ranging from creative dancing to card games like Magic: The Gathering and everything in between. It seems the school’s newest club will continue this trend.

Founded this year, the eSports club’s origin differs from that of most others at NC. While teachers founded groups like Film Club or Girls Who Code, two students founded this club, students who wanted to create a community tailored specifically for the gamers at NC.

“My partner Aaron and I went to Mrs. Cox and we asked if she was able to make a new club with us because we wanted another club besides Table Top that was for people who play games. It wasn’t a hard thing to do. [It’s] just a place for people who like to play video games more competitively, and it’s been working out pretty fine,” club co-founder and junior Liam Phillips-Denson said.

As the name would imply, the members of the eSports club spend most of their time at meetings playing video games. The specific types of games they play might seem hard to tell for outsiders, considering that they could play any game within the dozens of existing game genres; the club mostly plays a handful of games within one genre, though they do plan to expand their horizons.

“We play fighting games, and that’s basically it: we play [Super] Smash. Bros a lot or rhythm games like osu!, but also BlazBlue and [Dragon Ball] FighterZ; I’m not sure why [those games are popular], but people like playing those games. But outside of school, we want to start playing games like League of Legends and other competitive games,” club co-founder and junior Aaron Wilson said.

However, the concept of eSports can cause confusion among non-gamers: aside from its use almost exclusively coming from gamers, it only became globally popular in the last nine years, both of which may prove a hurdle for students considering joining. This becomes more pronounced when combined with the increasing difficulty of games and the resulting difficulty at increasing their skills, a subsequently harder learning curve. Despite this, the club openly accepts anyone willing to put their all into video games.

“eSports are basically competitive video games: sometimes games are designed to be competitive by nature, and in others, you take games you find fun, put more time into it and take it to a competitive level. At the eSports club, we welcome players who are getting into eSports or players who play competitively, or have a game that they like a lot and would like to play competitively. We take them and create a welcoming environment for players of all skill levels to learn about eSports as a career path and to create a welcoming community at NC”, junior club member Tristan Beach said.

Like any worthwhile organization, the eSports club can creatively motivate prospective members to join the club with their own unique benefits. In the eSports club’s case, a space to play video games with no cost to them. More important than convincing people to join, the group needs a way to convince their members to stay. NC’s computer crowd effectively does both by creating a pleasing environment for its members.

“What attracted me to join was that I like playing a lot of games. I’m very competitive, so the aura of the club was what made me want to push myself to be better and to play against people who are better. [We] have a good time together and have fun together, but we also improve our play. What’s motivated me to stay was just the people, they’re nice and fun. Most of everybody in there are cool with each other, and friends [outside the club]. They all have at least one thing in common, whether it be the same game they play or multiple ones,” junior member Devin Lightburn stated.

The more skeptical observers would look at a club like this and wonder, “Why does NC need a club for video games if Table Top exists?” One could answer this in a variety of ways, with the main answer discussing how Table Tops places their focus more on board and card games like Magic: The Gathering, while eSports club deals exclusively with video games. But above all that, the club manages to help NC students genuinely strong bonds with one another.

“I think it’s a way for students to connect with one another and communicate using the same language in their eSports endeavors: it seems like [members] have found different students, maybe they didn’t know previously that like to play the same games; so you hear these conversations about strategy and how they can play the game or cooperate towards that goal of being a winner. If you’re an avid gamer and you’re not involved in any activities in school, this might be a good way to connect with peers in the NC community. We meet twice a month on Mondays [in room 113, every second and fourth Monday], and Coach Tener’s taking over after football practice but we accept new members, anytime,” club advisor Mrs. Cox said.