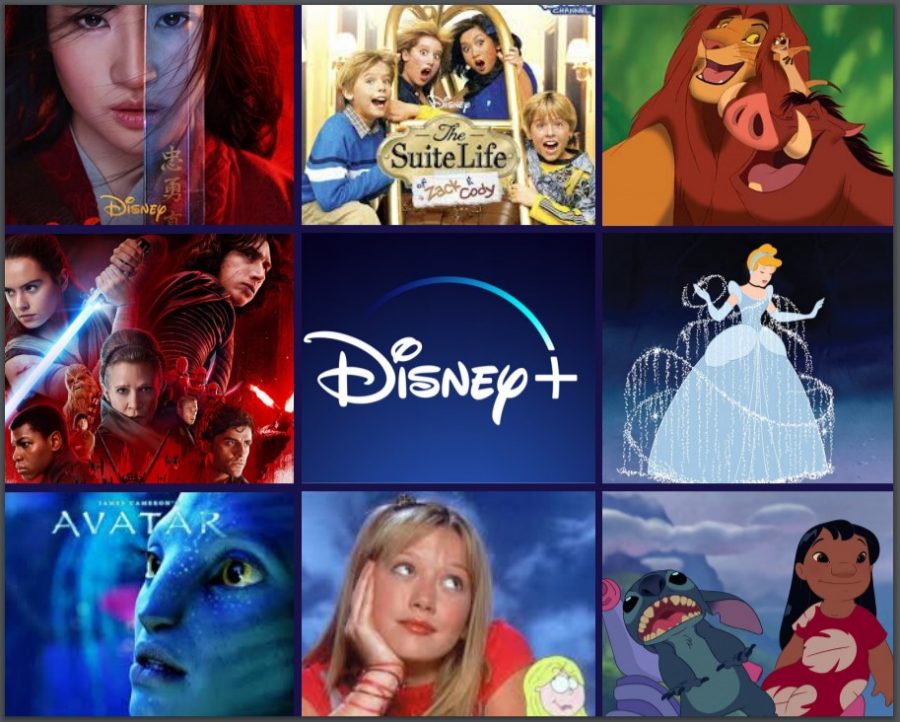 Released on November 12, Disney’s new streaming service Disney Plus plays host to a variety of movies and TV shows like “That’s So Raven,” “Mulan,” “Lizzey McGuire” and a variety of others. Viewers can browse 612 movies and 156 TV shows. The service received 10 million subscribers on launch day, a number that is projected to keep growing.

Disney released their highly anticipated streaming service, Disney + on November 12, with the plan to steal the hearts of viewers across the world. The service includes original Disney shows and movies along with content from Disney’s other outlets such as Marvel, Pixar, National Geographic and Star Wars. Currently, 10 million people ordered Disney + before its release and the company estimates a subscriber count of 13 million by the end of 2019.

The service comes in three different bundles: the basic bundle comes with Disney+ alone and costs $6.99 per month. The second bundle costs $12.99 per month and includes Disney+, Hulu, and live ESPN. The third package costs $79.99 for a year’s worth of the service. The service currently hosts 612 movies and 156 TV shows.

Disney Plus gives viewers a magical experience. They can access never before seen content, as Disney released the entirety of their infamous Vault onto the platform. The service also separates the content into various categories, with the Princess collection, Disney Originals, Star Wars, Through the Decades and countless others available for consumption. However, while the service provides enjoyable content for all ages, it does possess a number of issues. On the day of the release, the app and website crashed constantly throughout the day, though this most likely occurred due to the large number of people watching. However, with the enormity of the company, they needed to prepare for that ahead of time. In addition, Disney Plus does not display the viewer’s watch history and lacks certain content essential to the Disney experience, like the Spider-Man films. Most importantly the app does not run full screen on certain devices, such as select Android devices, tablets and Chromebooks. This means that while the service provides a tremendous amount of quality, its visual presentation hinders its potential compared to other streaming services.

Overall, the service provides an amazing experience. Similar to the theme parks, people of all ages can enjoy the trademark Disney magic. While the app still needs work, the future looks bright for this streaming service. Potential viewers can look forward to the enjoyable experience of reliving their childhood through Disney Plus.