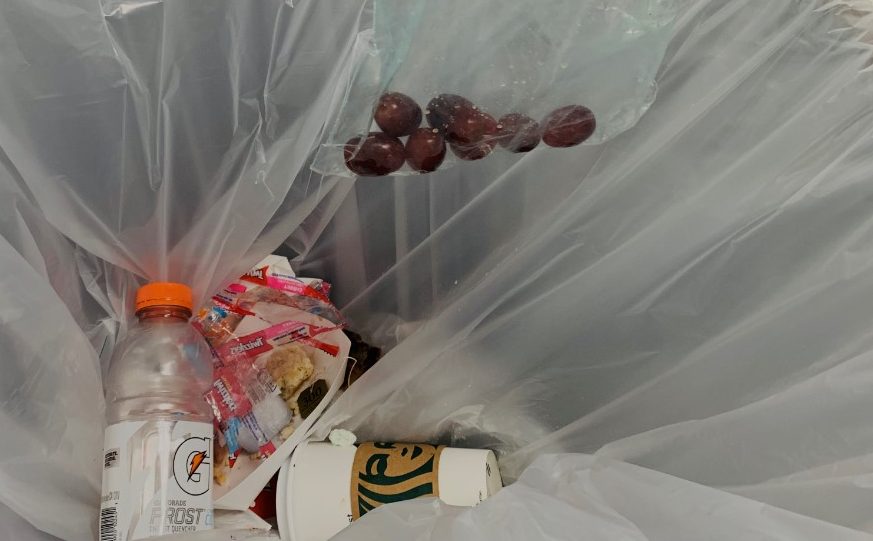 As the short lunch period comes to an end, students throw out their uneaten food that time did not allow for. The fast-paced lunch proves as just one of the numerous problems that lead to the monstrosity of food waste. Students need an adequate amount of time to consume food to fuel them through the rest of the day, along with decreasing food waste. (Elyssa Abbott)

As the short lunch period comes to an end, students throw out their uneaten food that time did not allow for. The fast-paced lunch proves as just one of the numerous problems that lead to the monstrosity of food waste. Students need an adequate amount of time to consume food to fuel them through the rest of the day, along with decreasing food waste.

The war with food waste

One in six Americans find themselves wondering where their next meal will come from, even though 40% of food prepared never even touches a plate. According to HuffPost, 130 billion pounds of food end up in the trash can before consumed. Within U.S. schools, kindergarten through 12th grade, food waste equates to around $1.2 billion dollars each year. These staggering statistics indicate that change must occur to combat the detrimental food wasted in American schools. 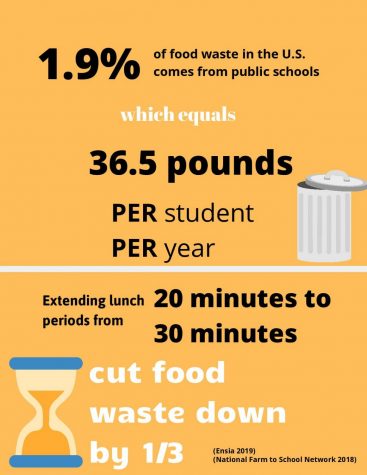 Lunchtime in schools consist of a hectic 25-minute period of time that students often spend socializing, even in the outrageous lines, instead of eating. The bustling cafeteria at lunchtime indicates one thing: students feel rushed during a time meant to relax and eat. Lengthening lunch periods allow students to take their time and consume their lunches fully. Studies found that with longer lunchtimes, students tend to gravitate toward fruits and vegetables more often. This could even lead to more productive class time. The long lines mixed with students catching up with friends present a time constraint, and the food not eaten often heads to the trash can. This waste directly influences the $218 billion dollars of food waste in America each year.

Another reason for this excessive food waste in school comes directly from the food itself. Schools tend to prioritize cost and convenience over taste and nutrition. As a result, trash cans overflow with unopened milk cartons and half-eaten mystery meats. People tend to eat with eyes and noses before the mouth, so food that does not look or smell appetizing will likely reach the trash can instead of the stomach.

“Certainly, the statistics on waste and food insecurity are staggering and it is natural to wonder why one issue [waste] isn’t being used to address the other [hunger],” said Brenna Ellison, associate professor in Agriculture and Consumer Economics at the University of Illinois. “Even though there is legislation to protect organizations who donate uneaten food in good faith, many are still concerned that they could be held liable if someone were to get sick from the donated food. One way to increase benefits to donating organizations would be to provide some sort of tax incentives where they would be willing to incur the costs of redistributing food.”

Nancy Deming, a sustainable food manager for Oakland School District in California, dedicates herself to eliminating food waste, especially in elementary schools. Deming implemented a program where students can leave unopened food in a designated area for other students. Deming offers food left at the end of the day to local hunger relief organizations. Unfortunately, this program and other similar fail due to fears of sanitary issues.

Programs do exist that work to fight the battle against food waste. Although rare, these organizations help, not only decrease food thrown away but also reduce the number of people in communities across the country that suffer from hunger. While people toss aside uneaten food, others wonder where their next meal will come from. Fortunately, organizations such as The Campus Kitchens Project in Washington, D.C. exist to transform uneaten foods into meals for the hungry. In the 2016-2017 academic year, The Campus Kitchens Project recovered over 991,872 pounds of food that would end up in the trash. From this, the program served 378,423 meals to those in need. Schools, especially elementary schools, recently started educating children about the importance of not wasting food inside the classroom. Teaching children young to not throw uneaten food away and realize the results of their actions will prevent the build-up of meals lost in the long run. 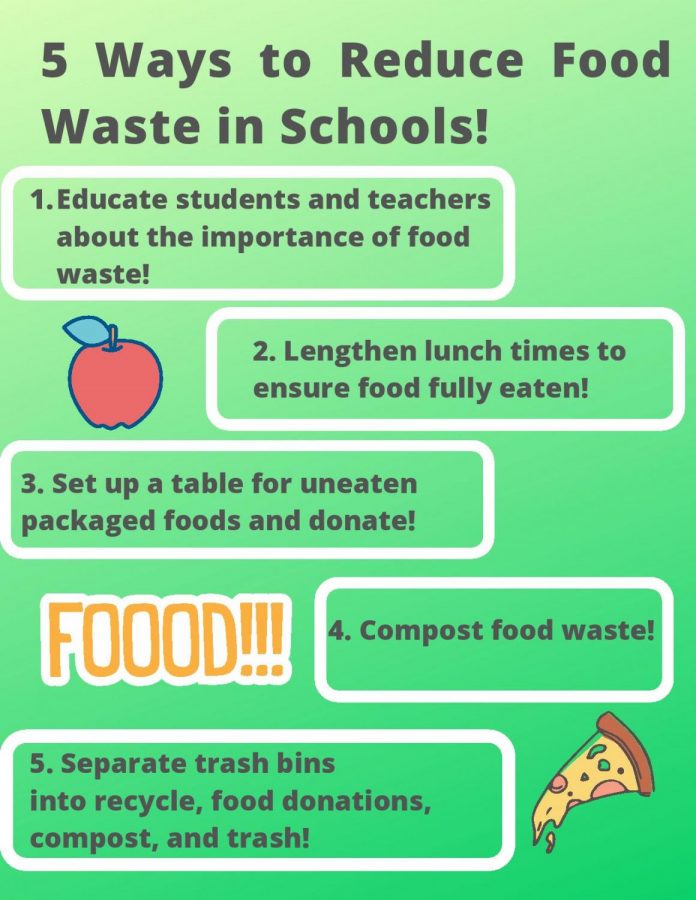 The first step in reducing food waste in schools involves lengthening lunch periods. This may result in stress in scheduling, but this cause matters. Schools, NC included, can make this easy switch and allow for more time for students to consume food. Along with that, serving students food they want to eat also holds importance. These two steps will drastically cut down on the millions and millions of pounds of uneaten lunches in the trash.

NC, a school with 2,900 students, accumulates a massive amount of food waste over the day. Most schools, including NC, “batch cook” to avoid waste. “Batch cooking” means cooking large amounts of food at once, so the cafeteria staff cook less throughout the four lunch blocks.

“We try to have very little extra food leftover at the end of the day. That is why we “batch cook” almost all of the items. This not only helps us to have little leftovers but also it helps to serve fresh quality food. However, we do have leftovers every now and then,” NC cafeteria manager Asif Edrish said.

Students often oppose the idea of reusing food due to health concerns, but uneaten food can help those with limited access to meals. Especially areas with a large homeless population, high schools and colleges give their untouched, clean leftover food to those who need it most. Depending on the item, NC may save it for the next serving time, but it generally heads to the trash. Items that will not maintain quality when reheated or produce items, such as cut apples and sliced tomatoes end up discarded.

Schools do hold a voice in this problem. Change must come or the issue will only grow more severe. Even in America, 40 million people struggle with hunger, but this can decrease with combined help between students and administration. The first step consists of simply talking about the problem. When students understand the effects of their actions, they will alter their behavior and not waste food.

“The 800-pound “gorilla room” at school is a room we often do not talk about. This is where our leftovers end up. How often have you seen students take a side salad or vegetables so that they can have a dressing? Then, they throw away the salad or vegetables. We all have to be aware of what we do. We need to educate ourselves, too,” Edrish said. 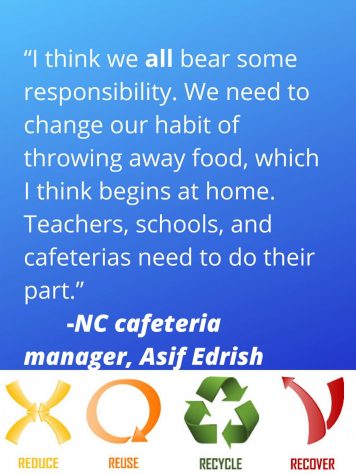 Cafeterias could start tracking the amount of food wasted each day and represent it visually on the walls of the lunchroom. Seeing a graph or pie chart can spark action in students and help them understand the consequences of tossing perfectly edible food. Another solution to the food waste epidemic involves giving students a chance to voice what they enjoy eating. If the greasy pizza constantly ends up in the trash can, change the menu to accommodate the people that eat it every day. Schools can even incorporate food waste into the curriculum or fun events. A word problem in math class or learning about the effects in science class share information with students efficiently.

Every solution poses an issue, but with all parties participating, this war with food waste can decrease in severity. Better options exist, they just need implementation in the school system.

“I think we all bear some responsibility. We need to change our habit of throwing away food, which I think begins at home. Teachers, schools, and cafeterias need to do their part,” Edrish said.