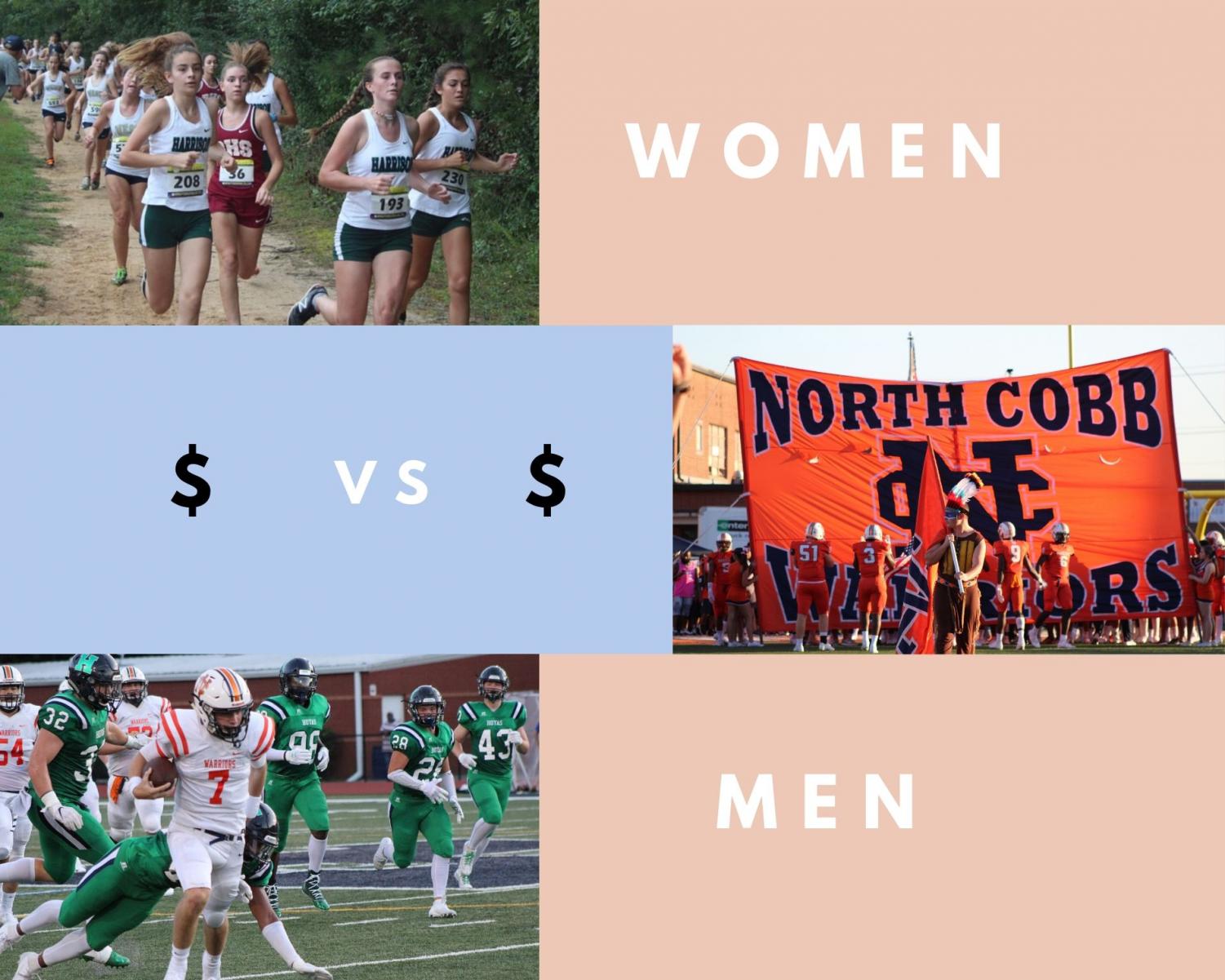 Men and women athletes constantly face different hardships throughout their careers in that particular sport they excel in. These athletes make different wages based on gender, not on how hard they work. Athletes begin facing these separations at a young age when they start their sport and the differences start appearing. (Haley Kish)

Men and women athletes constantly face different hardships throughout their careers in that particular sport they excel in. These athletes make different wages based on gender, not on how hard they work. Athletes begin facing these separations at a young age when they start their sport and the differences start appearing.

Sports broadcasting tends to pay closer attention and covers more men’s sports games rather than women’s sports games. Professional athletes, no matter the gender, tend to start playing their sport at a young age. When young athletes begin to play sports, sometimes the coaches put the boys and girls on the same team. As athletes become older and competitive, the sports organization splits the two genders into the boys’ and girls’ teams. They do this because, at a younger age, boys tend to hold more aggression unlike the majority of younger girls. Starting in high school, boys sports tend to receive the most coverage. At NC specifically, on the news and announcements, they announce football and other boys’ sports while girls’ sports are left behind or ignored. Football receives the most coverage and the most amount of followers while other sports, such as soccer and baseball, do not receive the same amount of coverage. The girl’s teams of those sports, such as soccer and softball, receive an even smaller crowd than the boy’s team, let alone make near the same amount of money as men.

Specifically, women who play golf, tennis, and soccer receive significantly less than the men who play the same sports. The men receive more coverage and more fans attend their games while the women perform just as well, sometimes better than the men. 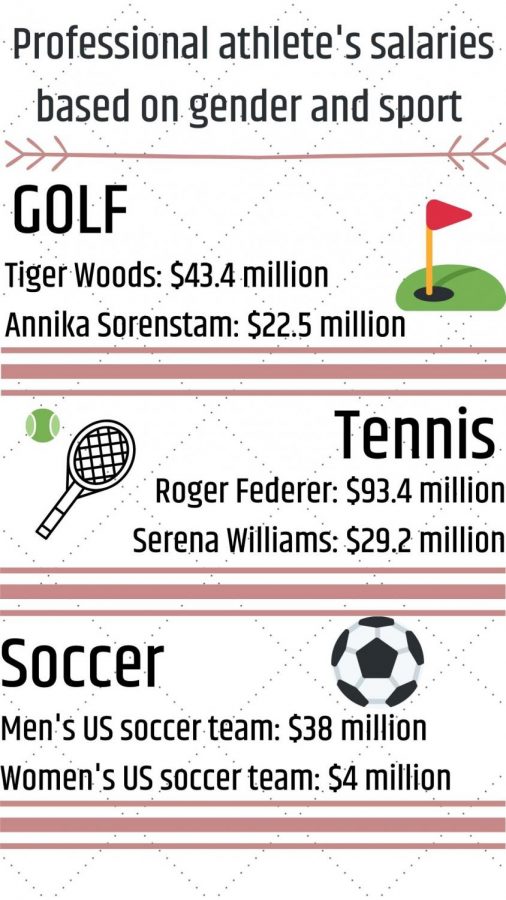 Golf presents itself as an example of a sport where women and men do not receive equal pay. Although they compete in the same events and play the same courses, women make significantly less than men. Starting back in the 1930s through the 1960s, women made less than two percent of what men made when women won golf tournaments. In 1963, JFK signed the Equal Pay Act which helped lower the wage gap between men and women. Even though this act passed, the US Golf Association still favored men’s golf more than women’s. Gradually over the years, women began earning more and more but still less than 50 percent of what male golfers make after winning.

When people talk about pro-golf today, usually the topic of conversation steers toward famous professional male golfer Tiger Woods. Woods, the highest-paid golfer in the world, makes an average of $43.3 million, even after the scandals and his injury that almost ended his career. To compare, the highest-paid female golfer, Annika Sorenstam, makes $22.5 million, around half of what Woods makes. Golf barely obtains any coverage, to begin with, but during the season, the Masters Tournament and the US Open receives the most coverage. The women’s tournaments receive almost nothing compared to the men’s, with the exception of main tournaments such as ANA Inspiration and the Women’s US Open.

“One of the reasons men get paid more is that women sports don’t make as much money than the male counterpart such as the NBA, MLS, LGPA, and the prize money,” girl’s golf Coach Hargis said.

Tennis also falls into the category where women receive less money than their male counterparts. The most important tennis matches consist of four tournaments deemed as “Grand Slam Events,” the most important and prestigious out of the other matches. The most prestigious, Wimbledon, which originated in England, occurs once every year during the summer. The other three Grand Slam Events, US Open, Australian Open, and French Open, all offer equal prize money for the two genders. The US Open tournament offered equal pay for men and women first and shortly after, the others changed and now, in 2019, all offer the same amount for prize money.

Even though the most important matches offer the same amount of money for winning the match, the players still make very different amounts of money annually. The most paid men’s tennis player, Roger Federer, makes $93.4 million while the most paid women’s tennis player, Serena Williams, makes $29.2 million, less than a third of what Federer makes. Willams receives more recognition for all of her accomplishments and how well she plays, especially after winning a Grand Slam tournament while pregnant with her daughter, but she still makes significantly less than Federer. They compete in the same tournaments but women earn less respect than men when they perform just as well in their tournaments. Professional tennis players make their money by endorsements which practically consist of sponsors from companies. For instance, Federer makes $7.4 million in prize money and makes $86 million from endorsements while Williams makes $4.2 million in prize money and $25 million from endorsements. They make very similar in terms of prize money, the two vastly differ with endorsements.

Soccer comes to mind when people mention the gender wage gap between male and female athletes. Even though the government wrote up laws to help prevent a wage gap, one still presents itself. The women’s US soccer team obtains a base salary of $100 thousand and will gain bonuses based on how well they individually performed while the men’s US team’s bonuses such earn $5 thousand even for a loss. The bonuses each player woman player earns depends on what team they play against and which cup they play in.

The women’s US team filed a lawsuit stating they make significantly less than men and they believe they should make the same earnings since they put in just as much work as the men. In the World Cup, when men lose, they make $3 thousand more than what women make for a win. The USSF states that men and women make their money based on the revenue that the game made with ticket sales and merchandise purchases. The women state they bring in more revenue than the men, but the men’s soccer contracts provide them with a higher base salary than the women’s team.

“Men get paid significantly more because they believe that they are better than the females at the different sporting events,” junior Tyler Dobbs said.

Throughout time when dealing with past wages athletes make, a huge gap between men and women presents itself. Women work and perform just as hard, if not harder, than men and should make somewhat similar to what they make. Women in other sports experience the same things as those mentioned above such as basketball. Women all around the world experience inequality and not just with money. Only recently have women been granted rights and “similar” pay wages to men.