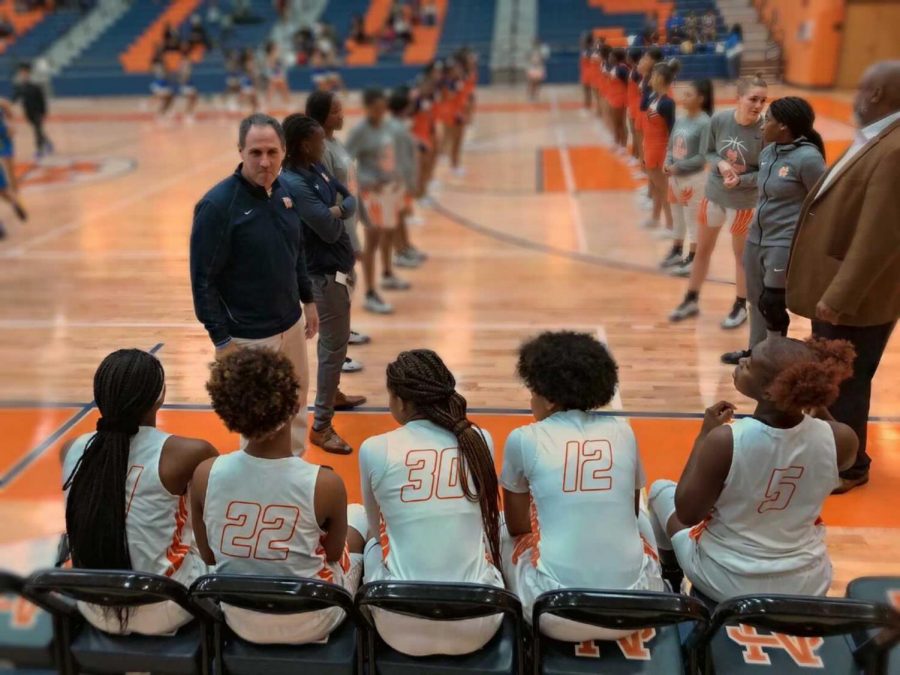 The Varsity Basketball teams for McEachern and NC line. The two teams faced off this past Friday, December 13 in a home game, which lasted from 6:00 to 7:30. Though the Warriors put up a good fight, they lost the game 57-54 after a short stint in overtime; their next game will take place this upcoming December 18 against Marietta.

This past Friday, the NC varsity  Warriors Girls basketball team faced off against the McEachern Indians. Coached by John Speeney, this game marked the tenth game in their 2019-2020 season. Thus far the season brought the girls incredible success: though they lost their first game of the season against Kell 51-4 (taking place on November 16), they quickly rebounded with victories over Pebblebrook (51-32), Pope (63-52) and Walton (59-31).

“We came into the season with high expectations: we had a little bit of a slow start in our first game, but it was a good wakeup call for us. Since then, we’ve played very well, even in our loss against Cherokee I thought we played outstandingly. I think we’re getting better every game, we’re looking forward to the game against McEachern because that’s always a battle for supremacy in the region”, Coach Speeney said.

Taking on McEachern, though seemingly no different from playing any other team in the county, brings the pressure to perform. Ranked 37th in the state and 5-2 overall this season, the Indian’s remain one of NC’s greatest rivals. Despite this, the girls felt confident heading into Friday’s game, citing their intense training and attention to detail as a key factor.

“I think we have a very high chance of winning against McEachern: we always play our best against them because they’re our rival, we’ve played each other so much. and in practice, we’ve been… making sure we’re practicing hard and we’re also watching film [replays of old games] so that we know what they do”, senior varsity co-captain Sydney Thomas said.

The first quarter started off strong for the girls, with Anari White-Neville, Dayuna Colvin and senior co-captain Azonya Austin each scoring two points throughout. Fellow co-captain Sydney Thomas and Austin managed to score another three points, bringing the quarter total up to 12 points. The second quarter saw a slight increase in their performance. Austin and Thomas scored two and three points respectively, while Colvin added another five points and Madison Edge brought the total to 14 with another four points. They peaked in score count in the third quarter with a total of 15 points; however, the last quarter saw the time slow down a bit with a total of 12 points, bringing the final score to 57-54 McEachern.

Despite their loss, the team continues to improve their performance across all areas, doing so as soon as Monday morning.

“[A few of them] got into the gym this morning and they were working on free throws. I know we were lower than how we normally throw them It was a tight, tough contest. We played really hard, that wasn’t an issue. We know that we’re a good basketball team, it’s a matter of fighting through adversity. We always try and at least learn from our losses,” Speeney said.