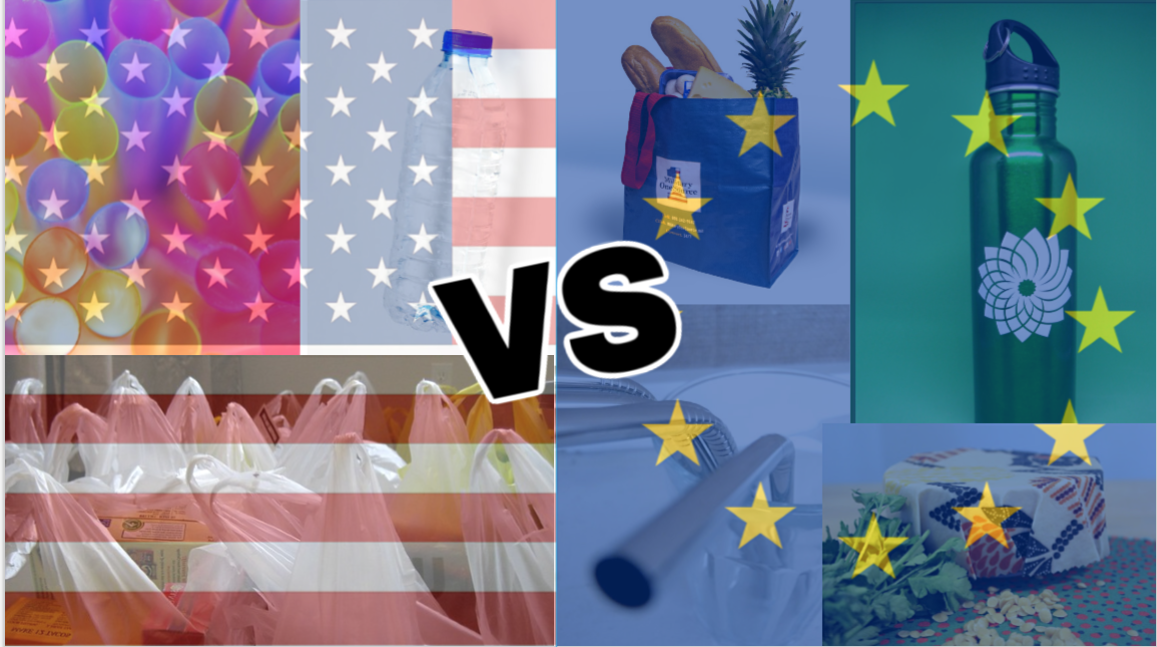 In 2018, 120,000 sq kilometers of rain forests died. Thousands of ecosystems have witnessed destruction. An island of plastic floats in the ocean over twice the size of Texas. Reports say we could self-destroy by the year 2050. Others say that within the last 40 years, wildlife has decreased by 60%. Sea levels continue to rise, forcing Indonesia to move its capital since the current one should go underwater in the near future. Hurricanes, floods, and forest fires continue to tear across our planet with no signs of stopping, due to the fact that human error causes these intense natural disasters. Disease threatens to ravish the American southeast due to the potential of easily spread illness by mosquitos, hot temperatures, and other threats.

Despite these reports and the fact that making yearly changes to help the planet would cost less than 1% of America’s annual GDP, Americans remain dangerously inactive and uninformed regarding the issues of climate change, ocean pollution and general conservation of worldly resources as opposed to our European counterparts. Although we see groups taking action such as The Sierra Club, EcoTrust, as well as numerous individual citizens making an effort, Americans remain largely unconcerned regarding the environmental health of our planet. Whereas European nations have put a variety of changes into effect such as banning single-use plastics, implementing clean energy policies, and using more public transportation, This stark contrast between the nations leaves many questioning America’s lack of effort. The question prompts many answers such as our president claiming he “know[s] more about the environment than most people” and labeling the climate crisis a minor issue, demonstrated by his mocking of young activists and skipping important climate meetings? Or the lack of attention mass media outlets donate to the state of our planet? Or the militia of teens armed with metal straws thinking they make a difference, despite the minuscule impact made close to minuscule compared to the 8 billion tons of trash that find its way into our oceans every year. Americans remain sadly uninterested in the climate crisis, this trend changing only when popular celebrities endorse a catastrophic event, such as Kim Kardashian with the Amazon rainforest fires despite the packaging for her makeup and shapewear lines contradicting her statements by lacking sustainability and most of the world forgetting about the tragedy in two weeks.

“Americans use plastic every day, water bottles, straws, etc. and many say they will make changes but the changes are only made on a small scale, with small companies and not the monster corporations. Some places provide the option not to use a plastic straw, but at this point it shouldn’t even be an option, Americans should get rid of them all together and continue to make changes in that direction,” Harrison junior Cassidy Culbreth said.

Americans may not realize the extremity of the current climate crisis and why ignoring it will lead to a perilous future. Glaciers have already started melting at dangerous levels, destroying the homes of thousands of arctic creatures who now face endangerment. These melting glaciers may also contribute to rising sea levels, which could eventually submerge the state of Florida. Global temperatures continue to rise due to greenhouse gases produced by human activity, causing more droughts and heatwaves than ever before, and by consequence, also causing more of the forest fires that terrorize the state of California. Also as global temperatures continue to rise, the amount of category 4 & 5 hurricanes will drastically increase as a result of both human and natural activity. Extreme heat, along with economic, agricultural, and health issues, will tear across certain regions of the United States.

“Individual action is definitely important and a good step but I’m a firm believer in going after corporations and lawmakers for evading accountability. I think the most impactful act for us to take regarding the protection of the Earth would be to target specific companies and groups responsible for major carbon emissions, chemical pollutants like fertilizer and plastic waste. FIshing waste is about 50% of the plastic in the ocean yet we are putting our legislative efforts in states like California towards a plastic straw ban which accounts for a very small fraction of plastic in the ocean. Having the public take responsibility for the climate crisis benefits those in power who are far more responsible,” Magnet senior Maggie Glancy said. 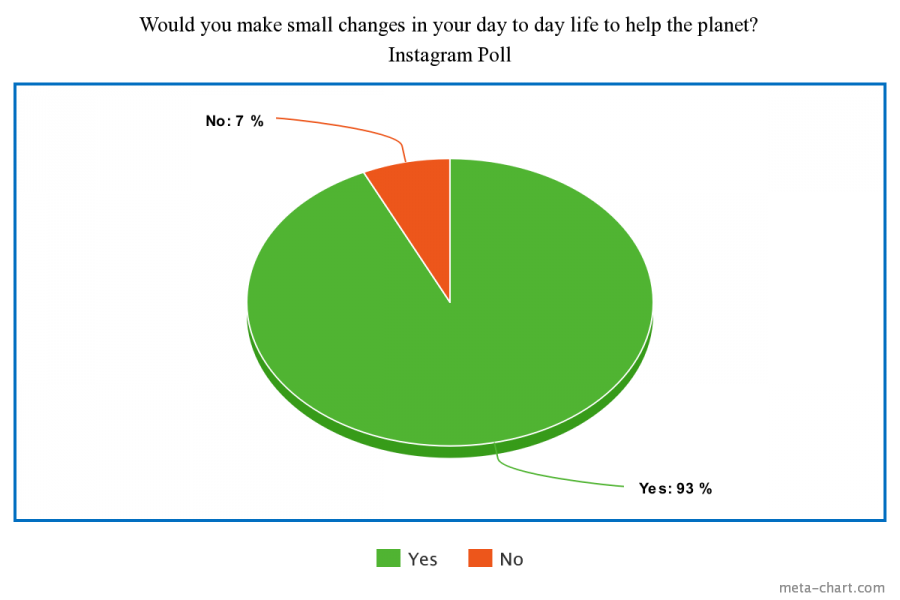 Gallery|4 Photos
Would you make small changes in your day to day life to help the planet? [Instagram Poll]

Contrasting their American counterparts, multiple European nations took these reports into account and jumped into action. In France, the President and Prime Minister wrote up an admirable climate plan and since then have taken strides to achieve their goals. These goals include gaining support from the citizens, achieving carbon neutrality by 2050, stopping the importation of products contributing to climate change immediately, and assisting developing countries in their national efforts to become greener. Since drafting this plan in 2017, France has also addressed the major issues of food waste and plastic use in the country. They passed a law that forbids supermarket food waste, forcing the markets to donate unsold food to charities, food banks, and homeless shelters, or compost the food if they must. This law aims to aid in reducing the one-third of all food produced that goes to waste in a landfill, then producing methane which contributes to the global warming crisis. In the United States alone, 30-40% of food produced goes to waste and the nation as a whole has made no effort to change this. While individual companies may take action, America lacks a policy for food waste. As for plastic consumption, the French leaps ahead of the European Union’s ban on single-use plastics by 2021, and vows to ban them by 2020. The ban includes single-use packaging, straws, and plastic cotton swabs in an attempt to prevent marine trash. Americans throw away 185 pounds of plastic yearly, with no signs of slowing down as a nation, implementing policies like France’s would make a much larger difference in the United States due to the differences in population and land area.

With the European Union placing the ban on single-use plastics, it encouraged other nations besides France to become greener. One of which, Sweden, received the label of the most sustainable country in the world.

Sweden’s climate progress, mainly due to individual cities making efforts, has become the success story of the European Union. Växjö became the first city to set a goal of becoming fossil-fuel-free by the year 2030, and since committing to the promise in 1996. The city has made progress on their goal by using centralized heating and cooling systems, sometimes referred to as “district heating.” District heating serves as a great alternative to oil heating because it doesn’t take any irreplaceable resources from the Earth, and gives off no greenhouse gases.

Malmö, another city in Sweden that has gotten progressively more sustainable, did it through innovative ideas and dedicated citizens. The city contains Europe’s first “carbon-neutral” neighborhood. How did they achieve this? The neighborhood uses a smart heating/cooling system, running on renewable energy. Recycled food waste turns into biogas used to power the city’s numerous and accessible public transportation systems.

As well as individual city successes, Sweden as a whole remains so sustainable partially due to the popularity of urban farming. Farming, an enjoyable pastime for Swedes, aids the planet by raising plants to pull carbon dioxide out of the air. As most residential areas provide community gardens, this also encourages socialization. As well, over 10% of Sweden’s land area hosts national parks/protected land. The love story between Swedes and nature keeps growing with no signs of stopping.

Finally, Switzerland, another high-ranking country in regards to sustainability has implemented the best waste management on the planet due to the fact that they successfully sort organic matter, recyclable materials and convert substances leftover into useable energy. Switzerland also focuses on preserving water quality for citizens, housing the most technologically advanced water treatment plant in all of Europe. These systems could easily gain popularity in America due to the fact that WM has already made strides to reach these goals. The “Waste Management Phoenix Open” plan makes efforts to sustain natural resources, use renewable energy, and operate with complete transparency. Getting this plan passed as a policy would act as a turning point for America’s development. Finally, Switzerland, paired with Norway, launched the Nansen Initiative in 2015. This plan was made to find a place for all those displaced by the climate crisis, whether from floods, fires, or extreme heat, Switzerland strives to find homes for those without them.

In conclusion, Americans sadly lack when it comes to the issue of the climate crisis in comparison to their European counterparts. However, abundantly researched solutions can thrive once implemented. Such as foregoing fossil fuels, much like Sweden has done. Cutting back significantly on fossil fuels and providing easily accessible public transportation can aid in the quest for a healthier planet. This solution, while not overnight takes small steps towards a larger goal. The United States could also boycott the poisonous consumer culture it has adopted. In simpler words, Americans need to buy less stuff. By cutting back on consumption, Americans can burn fewer fossil fuels, resulting in fewer greenhouse gases put into the atmosphere. Changes, however small, must happen and the United States will soon hopefully take after their European counterparts and start making them.