Popularity and circumstance: How pop culture has twisted the American high school experience 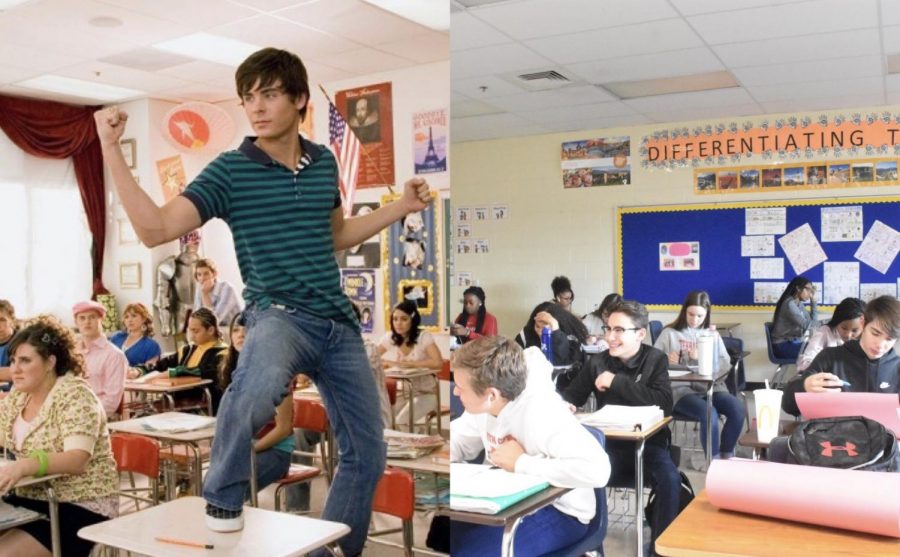 Just like hundreds of her peers, NC freshman Brooklyn Bolden grew up watching Disney Channel, where a majority of the shows focus on teens and their high school- hijinks. “High School Musical has always been a big influence on what I wanted high school to be like. Of course, it isn’t [very similar] but there’s a lot of stuff that goes on in high school just like the movie”. In 2006, High School Musical, a Disney Channel original movie now hailed as a cult classic and a childhood staple for Generation Z, aired and brought in a record-breaking 7.7 million viewers. Not only did the movie become apart of the celebrated film franchise that went on to gross millions of dollars, but it also gave elementary school-aged viewers their first taste of the high school experience. However, upon reaching high school those bright-eyed elementary schoolers, now freshmen, experienced a rather rude awakening

In the movies, high school seems like a scary place.

Mean girls lurk around every corner, bullies stuff scrawny kids into lockers, oblivious teachers drone on about useless information in depressing classrooms, and everyone worships the ground that the football players walk on.

The 1955 cult classic, Rebel Without a Cause, brought teenagers (who, up until that point, helped move storylines along mostly as secondary characters) to the forefront of popular culture. Arguably one of the earliest portrayals of high school life in the modern era, the iconic film helped create the stereotypical, all-American teen we still know and love nearly 65 years later—rebellious, filled with angst, and hungry for acceptance amongst his peers, despite trying to come into his own and discover his unique role in society. Teenagers make their friends (and enemies) in high school,  recognize their strengths and weaknesses, and prepare to leave the nest.

Over the past four decades, the media’s representation of the American high school experience morphed into a money-making monster of unimaginable proportions. Movies like The Breakfast Club, Clueless, Mean Girls, and last year’s To All the Boys I’ve Loved Before grossed millions of dollars and gained overwhelming approval from viewers for their entertaining portrayals of high schoolers and the issues they may face. The teens in these films are all chasing something. They might want acceptance, success, love, or, the most sought after of them all: popularity.

The media suggests that teens would overlook their personal values, surrender their individuality, or even break the law for the elusive perks that come with popularity. In pop culture, cheerleaders and football players represent the ultimate level of high school popularity. Take, for instance, Quinn Fabray from the TV show Glee— the blonde, gorgeous, captain of the cheer squad. Everyone knows her name, and everyone wants her life. In real American high schools, students might argue that this type of popularity simply does not exist.

“I think there are people that are well known, but there isn’t a ‘queen bee,’” NC magnet senior Fatoumata Touré said.

A CNN Health article by Jacqueline Howard points out that when one gains popularity, they give up the opportunity for closer, more meaningful friendships. A study published in the journal of the Society for Research in Child Development found that the students deemed the ”most popular” by their peers at age 15 might deal with higher rates of social anxiety at age 25.

“Not everyone wants popularity. People don’t worship popular people, like in the movies. They prefer to simply focus on what they have to do to graduate, have a good experience, and, if they’re interested in college, get into the university they want,” NC senior Rosanny Vasquez said.

On television, these seemingly untouchable “popular kids” determine the status quo and exemplify bad behavior for their peers. Underage drinking and the use of illegal drugs amongst high schoolers frequently appears in TV shows and movies, usually as a factor in a subplot, not showing the audience the true amount of damage these substances can cause.

SAMHSA, The Substance Abuse and Mental Health Services Administration, estimates that individuals between the ages of 12 and 20 consume approximately 11% of all alcoholic beverages consumed in the United States. A survey conducted by The National Institute on Drug Abuse last year showed a drastic increase in the number of students who admitted to vaping nicotine or marijuana in the past month. HBO’s Euphoria, which follows the rehabilitation of a young drug addict, premiered in June and made waves for its edgy portrayal of drug abuse amongst teenagers.

“On one hand, [Euphoria] can show young viewers the negative effects of drug use but it can also show how much “fun” someone can have while under the influence of a drug,” NC magnet senior Grace Nthale said.

Similarly, producers heavily cover the topic of bullying. Movies like Mean Girls showcase a more psychological type of bullying, while in other movies and TV shows, we witness characters enduring physical bullying, or even cyberbullying.  TV bullies enjoy making a spectacle of their victims and embarrassing them to the point of alienation from their peers. Real-life high school students do not engage in anything nearly as ruthless as writing something vulgar on someone’s locker or sticking someone’s head in a toilet, but a more surreptitious form of bullying manifests itself in the hallways.

“I think the most common [type of bullying] is psychological bullying. Fights that occur at our school usually go 2 ways. I hear more people talk about each other behind their backs than I see fighting,” NC senior Kiana Spencer said. 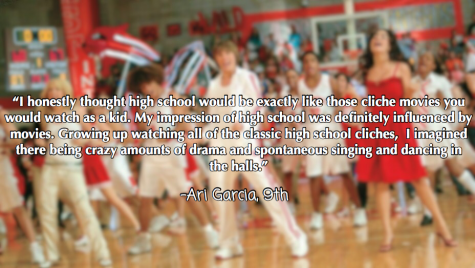 What does all of this mean? In a world where ideas and information can spread far and wide within seconds, why do these stale, overused stereotypes even matter? Popular culture’s portrayals of high school highlight its negative aspects and perpetuate false narratives that affect the way students view this interval in their lives. If we had the chance to change the narrative, we could foster the production of content that accurately captures the highs and lows everyone experiences during high school.