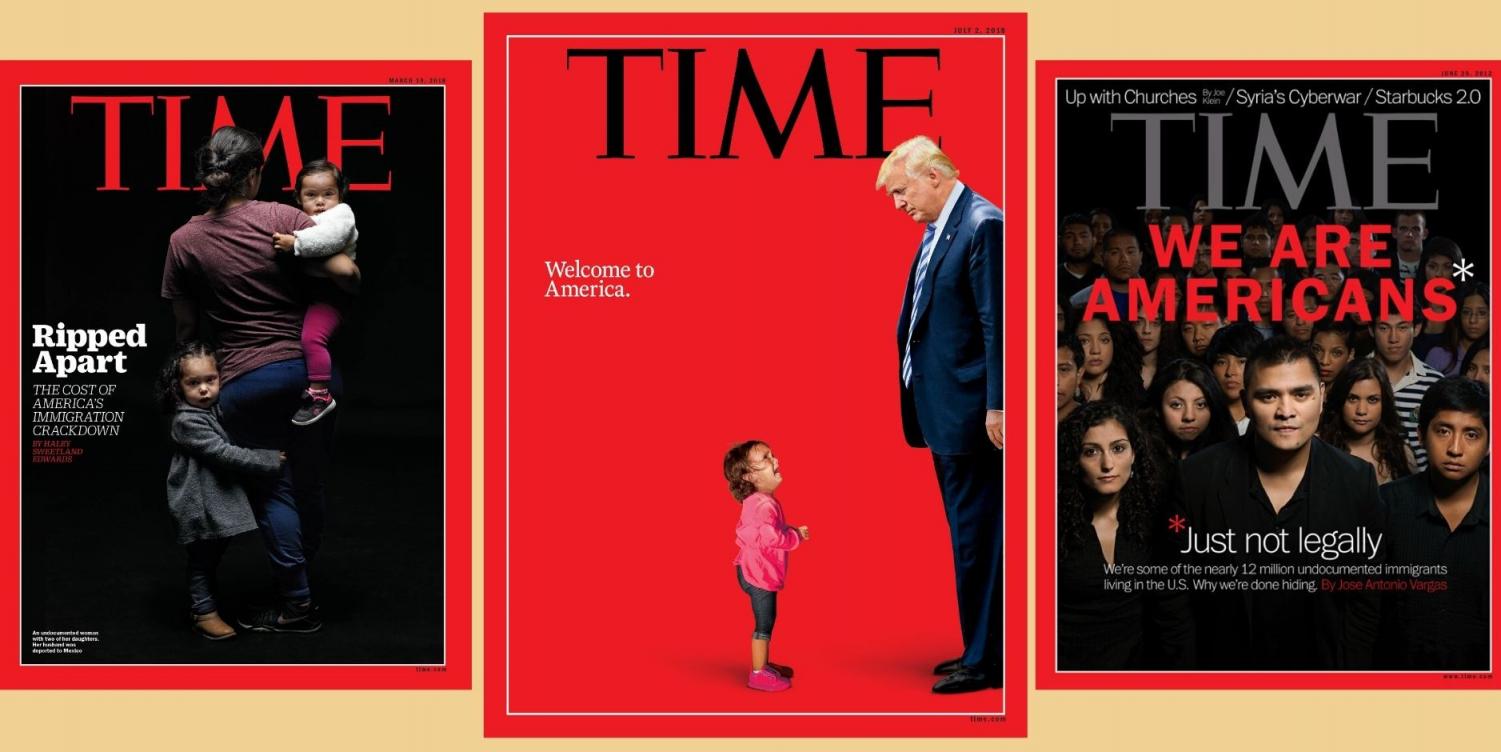 As the enforcement of immigration policies increases, the separation of children and parents continues to occur for those living undocumented. The effect of possible deportation on family members with undocumented parents will continue to play a major role in a child’s physical and mental health. Studies show that the possibility of losing a family member due to deportation will lead to further consequences for a family’s health and overall well-being, and the media continues to shine light on those living an undocumented life. (TIME)

As the enforcement of immigration policies increases, the separation of children and parents continues to occur for those living undocumented. The effect of possible deportation on family members with undocumented parents will continue to play a major role in a child’s physical and mental health. Studies show that the possibility of losing a family member due to deportation will lead to further consequences for a family’s health and overall well-being, and the media continues to shine light on those living an undocumented life.

An undocumented life: The psychological effect of possible deportation

Today, the enforcement of immigration policies continues to increase family separation, leaving children with only a mother or father or in some cases, neither. The United States, the main location for these migrants, reached a record-breaking number of 11 million undocumented immigrants. For those living in Mexico, they view the United States as a land filled with opportunities and hope for a better future. A study conducted by Jorge Durand found that Mexican immigration escalated to a national phenomenon rather than a regional phenomenon since the 1990s. This shows the continuous movement of migrants into and across the United States. The increase of immigration enforces the need for stricter immigration laws, affecting the lives of current and future migrants. 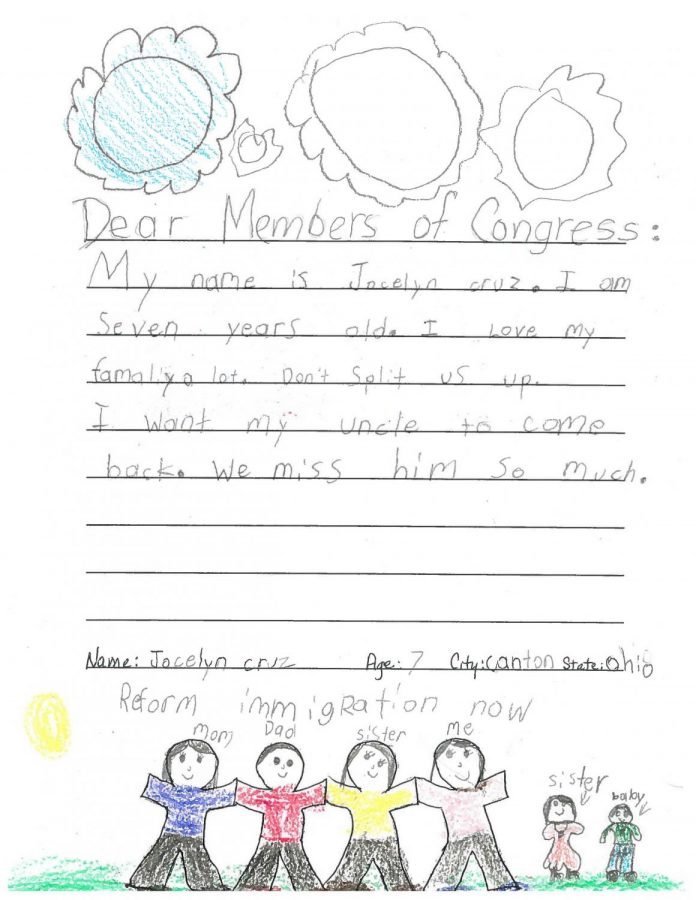 Gallery|4 Photos
Seven-year-old Jocelyn writes to the Members of the U.S. Congress as she explains her love towards her family. She continues the letter by asking to stay with her family and reunite with her uncle who she misses greatly. Her picture shows her family holding hands and writes, “Reform immigration now” above the picture.

The Illegal Immigration Reform and Responsibility Act (IIRIRA), which enforced penalties on undocumented immigrants, and the Antiterrorism and Effective Death Penalty Act (AEDPA), which provides prevention of terrorism and justice for such victims, increased the power of the federal government to deport immigrants. These laws permanently changed the situations of legal residents who originally lived in the U.S. and those with intentions of immigrating in the future. The rate of deportation slightly increased at the beginning of 1990, and through 1995, they averaged about 40,000 a year. The following year, the number of deportations exploded and averaged more than 180,000. Such changes in U.S. policies regarding immigration and the act of deportation caused the separation of family members throughout the U.S to increase. The fear of such action, specifically on children, cause family members with immigrant parents to constantly worry. Regardless of age, gender, or race, such a drastic shift in a child’s life will bring severe emotional, physical, and mental strain. The fear of deportation continues to rise throughout the years and will continue to do so as the support for the enforcement of stricter policies increases.

“Placing stricter policies won’t stop families from emigrating to the U.S. Families will continue to do anything possible to find a better future for their children, and separating families won’t help the situation,” Yamile Farias said.

Problems with the immigration system lived years before and continues to play a social factor in today’s society. Immigration laws placed limits on the number of people coming into the country illegally. Because of the inflexibility of the immigration and deportation law in the United States, this serves as a barrier for those wanting to obtain citizenship. Having a reputation as a country that builds upon opportunities and freedom, one would imagine an easy process to obtain citizenship. However, stricter immigration laws enforced target future migrants, limiting their access to the opportunities available in the United States. These laws shift away from the values America stands on and violate the protection of individual rights. The idea that all men and women deserve the same rights, regardless of race, sexuality, or ethnicity, should present itself throughout all laws and ensuring no exclusions of groups. The importance of enforcing the rights in our Constitution and civil rights laws begins the start of a new revision.

“People are just seeking to find new opportunities and a fresh start in life. They just want to help their loved ones back at home. If anyone were in their shoes, they would do the same thing for their family,” senior Erik Duarte said.

When looking at the process of deportation, a child’s life drastically changes and affects them for the rest of their lives. Martha Ockenfels-Martinez, Sara Satinsky, and Jonathan Heller published The Effects of Forced Family Separation in the Rio Grande Valley. In this journal of nonfiction based on the authors’ research, the authors find the health impacts of how daily activities can affect the lives of children and families in the Rio Grande Valley. The authors found that the incidence of childhood PTSD is potentially higher, the threat of a parent’s detention or deportation is a toxic stressor, and immigration stress impacts kids’ school success. Children showed internalizing problems, such as higher symptoms of anxiety and depression, and externalizing problems, such as withdrawal and sleeping and eating problems.

“Today, there is a lack of awareness towards families, children specifically, who have to constantly worry about their parents being deported. I question why they aren’t receiving any help or guidance. In my opinion, this is a crucial time for them where they need the most help they can get,” senior Kony Andrade said.

The effect of deportation also found to disrupt relationships and behaviors. An article brought the concern of the immigration status of a cancer survivor, Tania Romero, and her son, Cristian Padilla Romero. Coming from Honduras and moving to Georgia,  Padilla Romero continued his education in the United States through the Deferred Action for Childhood Arrivals (DACA) program. Because of his immigration status, he attended a private school in California, Pomona College, instead of a Georgia university. Padilla Romero now attends Yale University as a doctoral student. After living in Georgia for years, his mother faces deportation and awaits to be deported back to Honduras. Padilla Romera’s story and petition to stop his mother’s deportation shares an emotional message that seeks awareness.

“Knowing that I have classmates that are undocumented and are unable to attend college is simply unfair. As we’re preparing for our next step in life and anxiously waiting to receive an email back from our dream college, these undocumented students are left in the dark with no path or hope for their future,” senior Yuritzy Farias said.

A true understanding of such a concept brings awareness to the fear that undocumented and their families present: the fear of deportation. Such understanding emphasizes the importance of spreading awareness before the harm plays a major role and not after a family goes through separation. By bringing attention to this problem, a large number of individuals will finally feel a sense of relief that they no longer must carry on their backs. The importance of setting personal political views aside and letting only the information presented by such sources should help consider the final conclusion.