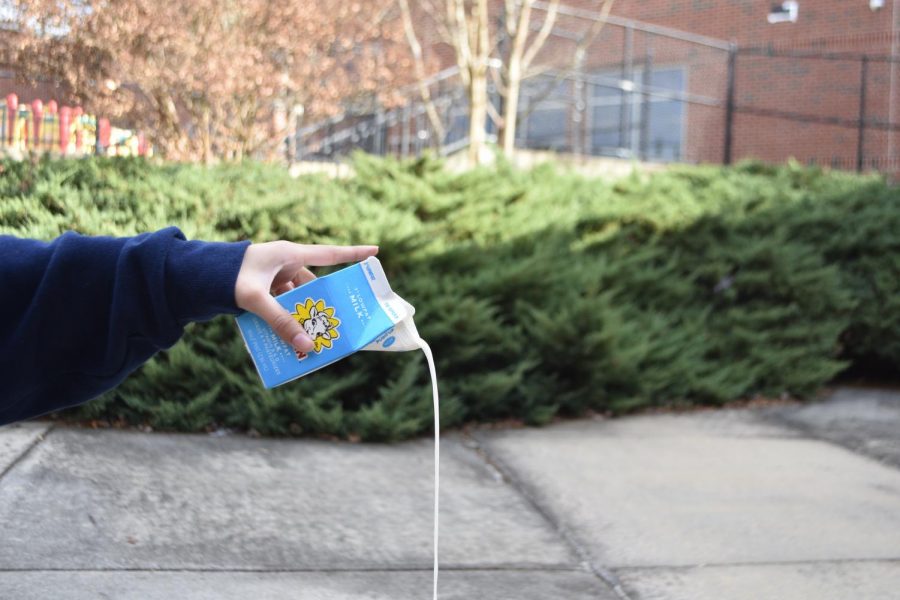 With avid milk drinkers unaware of the origins of dairy production, the truth of the process shocks consumers nationwide. Although campaigns put in place attempted to promote milk consumption, later, the changing diets of Americans caused a shift in preferences, increasing the demand for dairy milk alternatives. These drink alternatives take store shelves by storm, and creative recipes fill the dinner plates of willing experimenters.

During one’s childhood, an individual may experience the satisfying feeling of finishing a bowl of cereal and pouring the bowl down the drain, only for their parents to scold them for wasting. The media heavily pushed milk, telling consumers the benefits would help keep their bones strong and their hearts healthy. In reality, the hidden disadvantages outweigh the benefits.

Those who consume dairy products jeopardize their well-being because the milk increases mucus in the body. The build-up of mucus causes congestion in the throat and nasal cavity.

The tradition of drinking cow’s milk began in central Europe 7,500 years ago, when humans found a way to drink it without falling ill. At a young age, infants obtain the enzyme lactase; this vital enzyme aids in the process of breaking down lactase, a major component in milk. The destruction of lactase allows humans to drink the substance without any negative side effects. As an individual matures, the enzyme dies and prevents humans from digesting milk again. Over time, certain people’s bodies started to adjust to the changes in milk while others did not, leaving them lactose-intolerant.

During the ’90s, the Got Milk advertising campaign informed kids of the drink’s benefits, claiming that high amounts of calcium and other nutrients can prove beneficial to the body’s development. The foundation received positive feedback about their creative advertisements from its consumers. Their inclusion of musicians, kid-oriented characters, and athletes indirectly increased milk sales.

Recently, advertisements for almond milk increased as coverage on cow’s milk decreased. With changing diets, the popularity of almond milk and other milk substitutes grew to new heights in 2012. Almond milk, which includes a variety of flavors such as chocolate, coconut and strawberry allows consumers to enjoy the same flavors as regular cows milk drinkers, without worrying about animal cruelty. Various types of milk including oat, soy and hemp milk also became more popular in grocery stores and restaurants each with their own benefits.

Although those with dietary restrictions and nut allergies remain unable to consume almond milk, others can still receive health benefits. Prominent almond milk producer Blue Diamond emphasizes the substantial amount of calcium and other nutrients found in their product when compared to traditional cows milk.

“Fortified almond milk contains as much vitamin A and vitamin D as regular cow’s milk, and in some cases, more calcium,” Livestrong food and nutrition communications expert Kelly Plowe said.

Over time, the consumption of cow’s milk declined along with the change in diets. As of 2018, studies found that in American indigenous people make up the majority of lactose-intolerant people in the country, ranging from 80 to 100 percent; African-Americans experience the second-highest rate with 75 percent.

Aside from the inability to efficiently digest the lactase enzyme, the consumption of an animal’s milk forms the basis of an ethical debate: cows undergo mistreatment within the milk industry, living in crowded lots and under extremely unsanitary conditions. Dairy producers also artificially inseminate cows so they can produce milk. The true process of milk production remains widely unknown across the public.

The dairy industry also seems to overshadow the process of milk production. Consumers fail to understand the true origin of milk, specifically in America. Sources found that the American milk industry takes a toll on dairy cows, with the constant milking causing them to bleed. The milk that comes from these cows end up red from the blood and filled with pus. Later, the industry whitens the red tainted milk.

Aside from the unappetizing origins of milk, leaving cow’s milk for the consumption of humans strips calves from drinking their mother’s milk. The industry then takes the offspring of the dairy cows and slaughter them for meat. Not only does this negatively affect the chain of nature, causing an imbalance in the ecosystem, but also displays a lack of morality in society.

The constantly shifting milk industry bends to the demands and needs of consumers, changing the products that they then put on the market. With the increasing popularity of milk alternatives, the stability of the dairy market turns rocky.