Iran and US: What’s next? 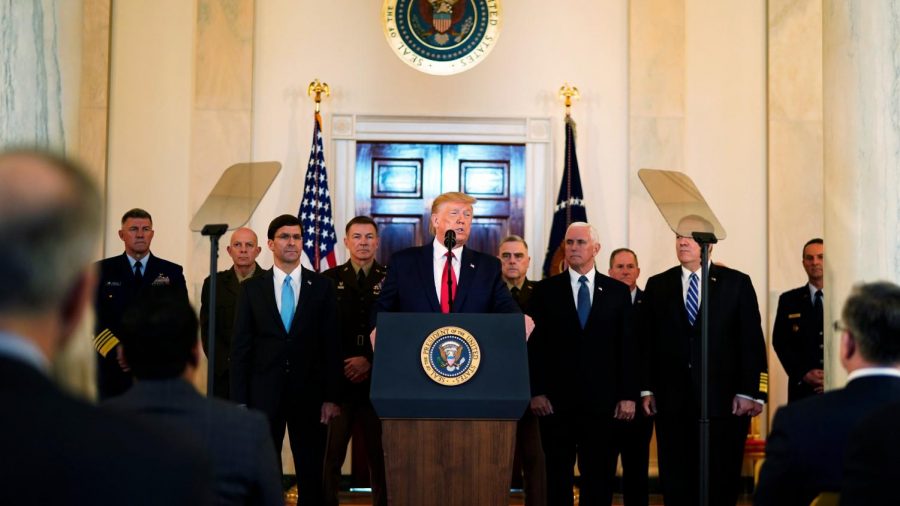 President Trump speaks about the retaliatory strike ordered by the Iranian military and announces his new strategy to avoid further escalation of conflict. “The United States is ready to embrace peace with all who seek it,” Mr. Trump said.

On January 3, an American drone strike assassinated the top revolutionary Iranian Commander, Qassim Suleimani, escalating the pre-existing strain between Iran and the United States. Four days later on January 7, Iran launched various missiles at Iraqi bases hosting US troops as retaliation to the death of the Iranian Commander.

A heap of about a dozen missiles targeted a specific Iraqi base within the Anbar province, a focal point for a number of American operations held in Western Iraq. The Iranian military launched eleven missiles that allegedly hit the bases in western and northern Iraq, with four failing mid-flight.

On Wednesday, Iran’s supreme leader Ayatollah Ali Khamenei called the attack a “slap in the face” from the United States and declared that the missile launch on that Tuesday would conclude the attacks on American forces, and President Donald Trump followed the statement tweeting of minimal injuries and damages.

“All is well! Missiles launched from Iran at two military bases located in Iraq. Assessment of casualties & damages taking place now. So far, so good! We have the most powerful and well-equipped military anywhere in the world, by far! I will be making a statement tomorrow morning,” Trump said.

“We do not seek escalation of war, but will defend ourselves against any aggression,” Zarif said.

Pressures follow back-to-back from Iran and the US at risk to another supposed World War. The Iran and U.S “rivalry” dates back 40 years in regards to power within Iran’s newly established Islamic Republic at the time and nuclear fears. Trump hosted a number of meetings with his administration in regard to releasing tensions and avoiding the costs of military action.

Trump seems to set up promising outcomes for the relief of tensions with Iran, and live updates persist on a multitude of platforms. Americans only hope for the farthest result of an upcoming world war.