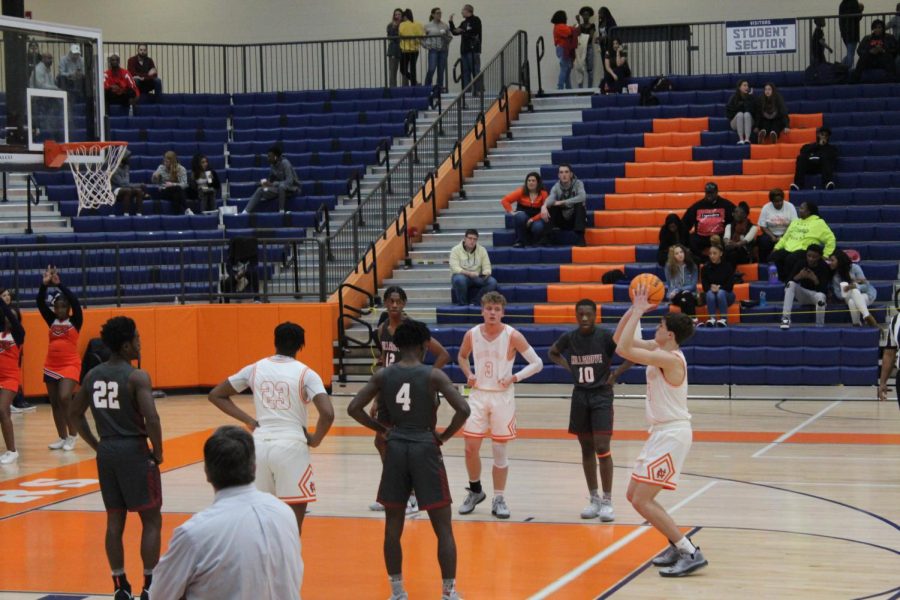 Sophomore forward Alex Acosta lines up for a free throw after a personal foul by the Hawk’s defense. Though a physical game, the Warrior frontcourt proved dominant, slightly outrebounding the Hawks. Seniors Justin Coleman and Freddy Wood contributed significant numbers in a resounding 50-37 win. “Our team just looked like we wanted it more,” Magnet sophomore Lawrence Kimani said.

The NC Varsity basketball team (11-10) continued their dominant region play with a win over the Hillgrove Hawks (9-13) on Friday, January 25 at the NC arena. Following a successful “Hoopcoming” week that featured a daily theme, pep rally and a student versus teacher basketball game, the 122 state-ranked Warriors boosted their region record to 5-2, placing second in the region ranks. Filled with fundamental plays and flashy passes, the Warriors outlasted the Hawks, prevailing 50-37.

“I’m really proud of my boys for getting that win. They were coming off a few tough losses last week, so this was a great bounce back,” JV sophomore guard Logan Bare said. 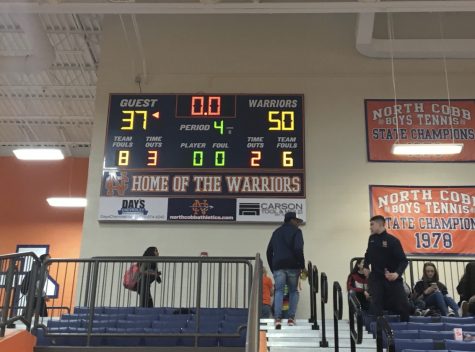 Peyton StackAs fans packed the North Cobb arena, the Warrior Varsity basketball team did not disappoint. Collecting a 5-2 record at home this season, fans usually seem content with each home game. The Warriors will take on their next game against the top-ranked McEachern Indians on Saturday, January 25.

The starting five for NC, including senior Justin Coleman, senior Freddy Woods, junior Jay Brown, junior Tyler Gorsuch and junior Jared Dejesus, contributed the bulk of the 50 point effort. Mixed with a positive showing from bench players, the Warriors started the first quarter fast and later capitalized with strong inside play. Only allowing 1,193 points on the season, the Warriors proved their dominance on the defensive side of the ball, limiting the Hawk’s scoring to 37 points in the entire game. Senior guard Freddy Woods accounted for multiple assists while the rest of the backcourt led in scoring. Forwards Alex Acosta and Jared Dejesus led in rebounding, both offensively and defensively.

“We’ve been progressing a lot lately. More shots are falling, plays are coming together better, and overall the team chemistry is improving. I think we have a shot at the Indians tomorrow,” sophomore forward Alex Acosta said.

After falling to both the Kennesaw Mountain Mustangs (9-13) and Harrison Hoyas (9-12) in which many expected a win, the NC Warriors fought through great adversity to earn another region win. As the Warriors draw closer to the end of the season, the NC coaching staff hopes to earn a top seed in the region playoffs. The Warriors will continue to strive as they take on Sharife Cooper and the top-ranked McEachern Indians on Saturday, January 25 at the Indian’s arena.