Lacrosse springs into a new season 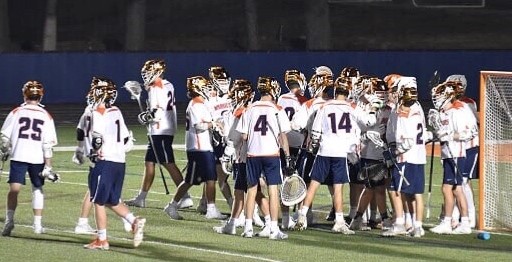 After defeating a tough competitor, Dalton High School, the NC Varsity boys lacrosse team celebrated. Hopefully, this win will happen once again this season with the help of a new coach, Dennis Desanctis. “Coach Descantis brings a knowledge of the game that we have not really had before, which can make our whole team better if we listen and act on his advice,” Goodsite said.

As the NC boys’ lacrosse team prepare for their upcoming season and their first game against the Kell Longhorns on Wednesday, February 5, they reflect on the past season to figure out where they need to improve and beat their 3-4 record.

“I would like to focus and improve on the team’s knowledge of the game and communication with each during the game,” Varsity coach John Almy said.

During the past month of conditioning on Tuesdays, Wednesdays and Thursdays, the boys worked on improving their skillset and game IQ to serve them when playing their toughest opponent, Allatoona High School. Official practice started on January 20 and consists of developing the team’s stick skills and practicing offensive and defensive positions.

After losing five seniors last season, the current upperclassmen need to step up to fulfill relinquished leadership roles that led them to beat rivals, such as Dalton High School in the first game last season. This motivated the boys for the rest of the season as they started off on the right foot.

New World History teacher, Dennis Desanctis, joins the coaching staff for the 2020 lacrosse season, hoping to inspire the team to play hard when playing the Allatoona Buccaneers. Not only growing with a coach, but the team’s roster also holds around fifty names, a notable increase from prior seasons. With the new coach and more players on the field, the boys prepare for a rather tough season, but one with hope of a positive outcome.

“My overarching goal for the season is always to make playoffs, but this year along with that, is winning at least half of our games and working as a team,” Magnet junior Walker Goodsite said.