Baker students dip their tails into the world of theatre 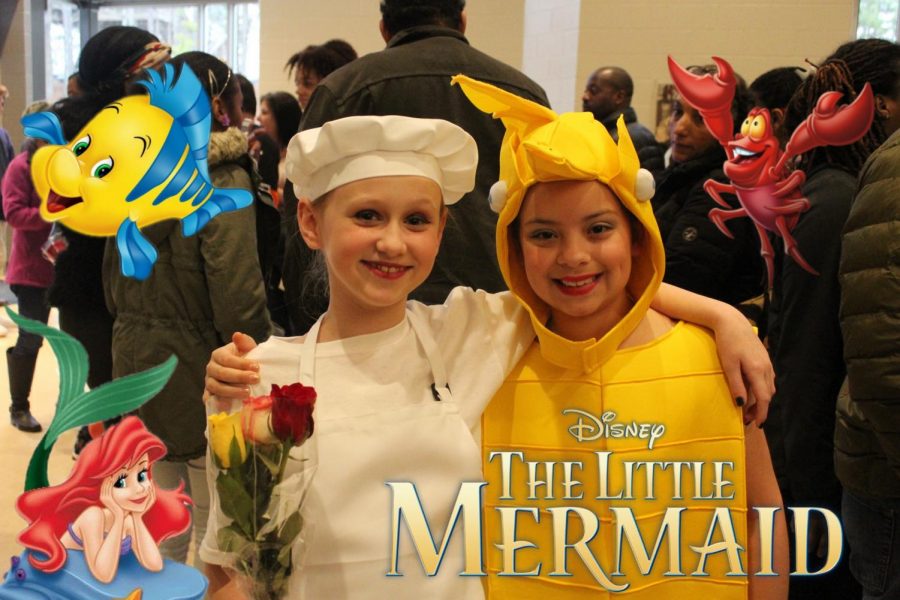 On-stage enemies and off-stage besties Zoë Zavala and Kelcie Crosby shared numerous laughs over the long months preparing to make their stage debuts. This friendship continues to flourish despite the shows closing the girls hold onto memories that will last them a lifetime. All 50 cast members created an unbreakable bond with each other and look forward to making even more memories in the next year’s musical.

Ariel, Sebastian and Flounder splashed onto the stage this weekend, making their debut at NC on Saturday, January 25 as a part of Baker’s Pawsitive Theater Program. After months of hard work and dedication, members of the Baker Elementary School stage department dazzled hundreds of audience members with their performance of The Little Mermaid, Jr. The classic production perfectly captured the forbidden love story between a beautiful mermaid and a human prince. The combination of numerous hours of preparation and intense practice led to the members perfecting their portrayal of these beloved characters. Each actor and actress poured their hearts into their characters in such a way where the audience could see each cast member’s own distinct personality shine through the familiar Disney characters.

Members of Baker’s theater program pride themselves on the program’s depth, as it allows students to explore the realm of musical theater while creating new friendships and strengthening old ones. Students learn basic acting, singing and dancing skills alongside their newfound friends. Though seemingly difficult at first, practicing twice a week since September paid off in the long-run as the cast took their final bows and applause filled NC’s auditorium.

Unlike most companies, Baker’s Pawsitive Theater Program stood out for possessing two casts and performances. The first performance (made up of members of Baker’s blue case) occurred at 1 p.m., followed by a 4:30 p.m. performance put on by their red cast. All of the young actors and actresses played a role in each show. However, the leads in each show differed. This unique approach to children’s theater allows each student to have ample amounts of stage time while advocating for inclusion.

Baker’s theater program manifested their concern for their community and charitable efforts to fight to keep the oceans clean. Since students portrayed characters that lived under the sea, they developed a sense of empathy towards real-life sea creatures whose existence continually becomes threatened by careless human nature and water pollution. In an effort to fight against this urgent issue, Baker set up tables outside of the auditorium in the performing arts center equipped with volunteers eager to share their vast knowledge on how to help save innocent sea creatures.

Both of the performances by the Baker Bears left the audience in awe and turned out nothing short of amazing. The children always stayed in character despite any mishaps that occurred. When an actor missed a cue, inspiring actress Zoë Zavala utilized her improv skills to keep the show moving forward without disruption regardless of any missed entrances or lines. This cover-up proved that Zavala among other cast members possesses true potential and a promising future on the stage. She even caught the attention of NC theater director, Candice Corcoran who approached Zavala after the 4:30 p.m. show to confirm that she would attend NC and participate in their theater program when the time comes for her to begin her high school career.

Without 50 cast members, 8 directors, microphones from Young Actors Playhouse, and permission to use NC’s theater, The Little Mermaid Jr. would cease to exist. Cast and crew combined spent an estimated 90 hours perfecting their production. NC theater students volunteered their time to ensure the technical aspects of the production ran smoothly.

“I loved getting to be apart of children’s theater and seeing the passion that kids have for being on stage,” sophomore Katie Ponier said.

The tedious preparation proved effective when the show went off without a hitch. Heading into the beginning of a new week, actors and actresses alike indulge in the relaxation they missed out on in the chaotic weeks approaching the Little Mermaid production.