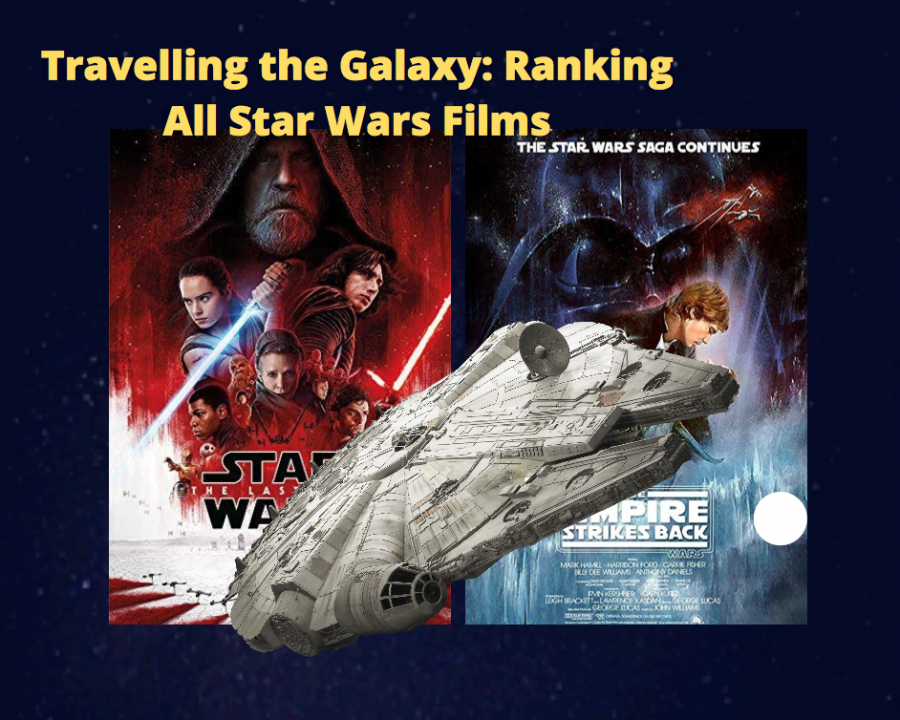 “I like episode two, Attack of the Clones, the best. It has a lot of epic action scenes”, NC Junior Matthew Loveland said. Star Wars fans everywhere have their own opinions on the culture-defining movies, but of the nine films that compose the Skywalker Saga which one is the best?

With the recent conclusion to the Skywalker Saga and the release of Rise of Skywalker, fans and newcomers to the Star Wars franchise alike find themselves returning to the original six movies. Discussions of which movie ranks above the rest have remained relevant since the theatrical release of The Empire Strikes Back.

#1: The Empire Strikes Back

The Empire Strikes Back holds the title for the best Star Wars movie. The characters of Luke, Han, Leia and Darth Vader come to life with an extremely potent and realistic characterization that allows the characters to feel real and keep audience members interested. The film also highlights the development of Luke, from whiny farm boy to blooming Jedi in a way that feels rewarding to viewers. A movie needs more than quality writing and special effects to receive the status that The Empire Strikes Back currently holds. Empire offers action, romance, comedic dialogue and memorable scenes such as the fight between Vader and Luke in the final act that will keep moviegoers entertained.

The movie that began this world-famous franchise, A New Hope places amongst the best in the Star Wars saga. Perfectly displaying a hero’s journey and including minute details that blend cohesively together, Star Wars serves as a proper introduction to the science fiction world. Referred to as a classic nowadays, audiences ranging from young to old can relate to all lessons taught throughout the 2-hour-and-5-minute film. By introducing the Skywalker family and digging at its roots, A New Hope set up Empire perfectly. Viewers also witnessed one of the earliest films to use matte painting and man-made models to visually represent true sci-fi themes.

One can say a fair amount about the prequels and how they pale in comparison to the original trilogy, but Revenge of the Sith stands out as the best of the trilogy. Its opening scene manages to convey the relationship between Obi Wan and Anakin in a way that the other two prequels failed; it manages to also show the viewer the depths of Anakin’s Jedi training, and his temptation towards the Dark Side of the Force. Despite the film lacking well-written dialogue and suffering from dated special effects, it still offers a thrilling and satisfying conclusion to the trilogy and possesses arguably the best fight choreography seen in any Star Wars film.

Completing the original Star Wars trilogy with a final face-off between Darth Vader and Luke Skywalker, all fans sought closure in Return of the Jedi. Mixed with Skywalker’s new green lightsaber and the fuzzy, furry Ewoks, this film’s cemented itself as one of the greatest endings to any trilogy. Though a handful of fans complained about the missing information between episodes 5 and 6, director George Lucas brought Anakin Skywalker back to the light after overcoming his inner battle with his alter ego Vader. Viewers and fans can ultimately point to this film as a great cornerstone in the film industry.

This film proved itself an unfortunate waste of potential for the first in the prequel trilogy, but it still manages to stand out above the films below it for its excellent fight scenes and providing a view into the Star Wars universe that no other film offered at the time. Despite the film’s cast of well known and talented actors such as Liam Neason, Samuel L. Jackson, Ian McDiarmid and Ewan Mcgregor, it suffers severely from poorly written dialogue and an inconsistent tone. However, its characterization in silent moments such as Qui-gon Jinn’s meditation during his fight with Darth Maul leaves the viewer with everlasting impressions of the characters.

After Disney announced a sequel trilogy of Star Wars films, fans seemed skeptical about the storyline and execution that writer-director JJ Abrams could possibly take. With the newly introduced characters complementing past characters, some unique interactions formed nostalgic and reminded viewers of the originals. It seemed all Star Wars fans felt a piece of their childhood when Han Solo, finally stepped aboard the famous Millenium Falcon. Though a continued storyline managed to provide fans with some mystery, the lack of universe details between the originals and this film, unneeded humor that breaks the film’s tone and a questionable fight between new characters Rey and Kylo Ren, does knock this film down the list

#7: The Rise of Skywalker

Following the release of The Last Jedi, fans possessed great anger and concern towards the saga’s direction. Though fans still found managed to find flaws in the film, sensible explanations answer the dilemma around Rey’s background as a Palpatine. Possibly one of the greatest lightsaber battles in Star Wars history also helped highlight this film. Despite ultimately failing in its execution, Abrams managed to bring back what A New Hope started: lessons and teachings on the importance of family.

The Last Jedi caused a level of controversy never seen before in the Star Wars community: its characterization of Luke Skywalker, plot points that lead to more questions than answers when thought over and its attempts to surprise viewers with subversive events all came at the expense of decent writing: Leia and Holdo’s plan to escape the First Order leads to the deaths of hundreds of resistance soldiers, the writers neglected Luke’s character arc from the original trilogy, and they managed to waste this trilogy’s potential with Finn and Captain Phasma. Overall the movie will leave viewers a bit confused, but it does contain truly stunning action sequences and special effects.

Possibly the largest let down in all of the Star Wars franchise, “Attack of the Clones” seemed more like an awkward romance film rather than the classic science-fiction that made Star Wars so iconic. Lacking anything resembling decent dialogue or character development, events never fit consistently together. Despite a negative overall rating, Attack of the Clones featured a cool group lightsaber battle on the planet of Geonosis, where viewers witnessed the most fierce Jedi in the galaxy fight side by side. Poor directing, writing, and execution built a weak foundation in the second film of the sequels.

The original trilogy set the tone for a generation-defining saga. Unfortunately, nothing else since then lives up to the legacy that the original films possess. However, despite their flaws fans can enjoy each film and look forward to future series and theatrical releases.