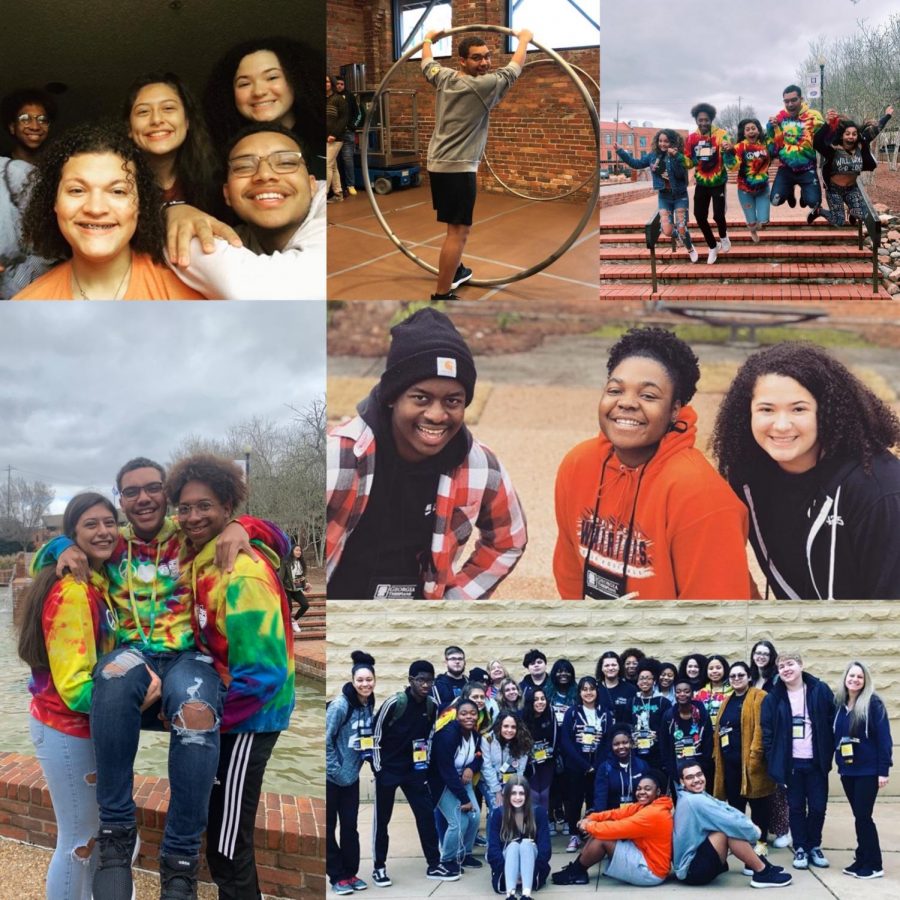 NC Standing Ovation Troupe 4225 made memories that will last them a lifetime this weekend at Thescon. NC theatre students united with thousands of Georgia thespians to create numerous new friendships with other actors from different schools. This weekend will forever live in the hearts of all thespians who attended in years to come. After an exhausting weekend fully equipped with acting, singing and dancing, thespians returned home with a multitude of new skills to add to their theatrical tool belts. “This was my first time going to Thescon and it was even more fun than I could have possibly imagined. I can't wait to go back next year,” NC sophomore Alyssa Maclellan said.

26 of NC’s most avid thespians traveled to Columbus, Georgia to participate in the annual Georgia Thescon Conference. The three-day conference took place at Columbus State University’s College of the Arts and lasted from February 6 until February 8. The school’s campus presented thespians with beautiful sightseeing stops along the Chattahoochee River as students traveled to and from meals, workshops and shows. Workshops allowed the performers to strengthen their acting, singing and dancing abilities in a supportive environment. The event united 6,000 high school performers from around Georgia, allowing them to indulge themselves in a passionate environment where everyone’s hearts beat for their love of theatre. The conference allowed students to participate in numerous intriguing workshops while learning a multitude of new skills to bring home to their beloved theater departments, enabling them to enhance the quality of their upcoming productions.

“It is one of the most exciting weekends of the year for us, we are honored to have such talented people exploring Columbus,” Columbus mayor Skip Henderson said.

NC Standing Ovation Troupe 4225 departed NC at 7:30 am Thursday morning, alongside Kell High School’s theater department. The bus left during severe storms and traveled through flash flood warnings, but the NC actors refused to let the rain dampen their spirits. Over the course of the two and a half hour bus ride, NC and Kell students alike shared laughs and belted their favorite Broadway show tunes while eagerly awaiting to arrive at Thescon. Upon arrival, students received their Thescon welcome packages complete with their lanyards, conference shirts and pre-ordered tickets to various viewings of performances throughout the weekend. After receiving their packets, students quickly added theatrical pizzaz to their lanyards, by decorating them with hand-crafted hug pins.

Hug pins: an ancient Thescon tradition encourages actors to interact with other troupes while befriending fellow theater enthusiasts. Thespians created their hug pins by decorating clothespin with anything and everything the creator could think of, including but not limited to: glitter, patterned tape, musical references, rubber ducks and faux floral decor. While a hug pin begins as an ordinary wooden clothespin, the pin quickly transforms into a unique manifestation of a performer’s beliefs, interests and personality traits.

Originally, thespians exchanged hug pins only after introducing themselves and hugging one another. This tradition faded over the years to avoid spreading germs with hopes of returning home without what thespians refer to as the “Thescon plague” or “Thespian Flu”. While the tradition of hugging diminished, the pin exchanges continue to flourish, allowing students to return home cherishing creative pins and decorated lanyards that serve as tangible memories of all of the new friendships created at Thescon.

During the 72 hours spent at Thescon, NC actors viewed five one-act productions and participated in eight singing, dancing and acting workshops where they learned the skills necessary to succeed in theater. Theater members carefully selected which classes they would take before arriving at Thescon through an online app called “guidebook”.

This app served as a tour guide for thespians all weekend providing them with everything from weather updates to directions. NC thespians took an assortment of classes taught by professionals from each field including: “Juggling for Beginners”, “KAPOW! The art of Stage Combat!”, “Yoga for the Theatre Artist: Taking Care of Your Instrument” and “Cirqueshop 2020.” Classes taken by NC students varied, but everyone loved each class they participated in.

“The best workshop I took was definitely ‘Broadway Dance’. We learned a challenging, fast-paced dance routine to the song, ‘Sing Sing Sing’. I was surrounded by amazing dancers in this class and felt like I was really able to be myself,” NC junior Jaydon Ingram said.

Thescon ended with a showcase of Individual Events consisting of dramatic monologues, singing duos and musical ensembles. The showcase came to a close with the All-star cast performance of “Seasons of Love” from Rent, serving to remind Thescon attendees to continue their love for not only theatre but for each other. The short time spent at Thescon created memories and inspired thespians to become the best versions of themselves on and off the stage.

“This weekend was so inspiring; I got to interact with so many theater kids who love their craft. This opportunity made me feel like I wasn’t alone in my uphill climb to becoming a performer,” NC sophomore Maxwell Rounsaville said.